Please ensure Javascript is enabled for purposes of website accessibility
Log In Help Join The Motley Fool
Free Article Join Over 1 Million Premium Members And Get More In-Depth Stock Guidance and Research
By Leo Sun – Oct 2, 2021 at 8:30AM

Which cybersecurity company is a better all-around investment?

Back in January, I compared two well-known cybersecurity stocks, CrowdStrike (CRWD -1.04%) and Palo Alto Networks (PANW -0.51%). At the time, I declared that Palo Alto's superior balance of value and growth made it a better buy than CrowdStrike, which seemed far too expensive.

CrowdStrike's stock price has risen nearly 20% since I made that call, while Palo Alto's stock price has rallied more than 40%. Will Palo Alto continue to outperform its higher-growth challenger for the foreseeable future? Let's take a fresh look at both cybersecurity companies to find out. 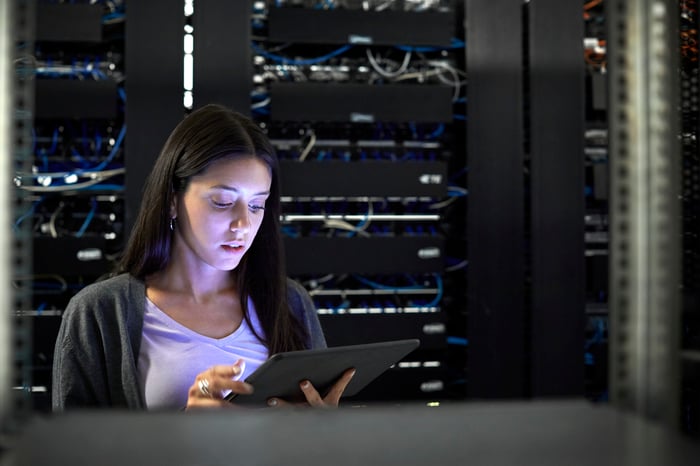 Many cybersecurity companies install on-premise security appliances, but those systems can be difficult to scale as an organization expands. CrowdStrike addresses that problem with its cloud-native platform, Falcon, which provides end-to-end security via cloud-based services without any on-site appliances.

CrowdStrike was founded 10 years ago as a cloud-native company, which gave it an early-mover's advantage against legacy cybersecurity companies, which gradually pivoted toward cloud-based services.

CrowdStrike served 2,516 subscription customers back in January 2019. That figure hit 13,080 in its latest quarter, representing 81% growth from a year earlier. Sixty-six percent of those customers had also adopted four or more of its cloud-based modules, up from 57% in the prior-year quarter.

CrowdStrike's growth rates are impressive, but its stock already trades at nearly 40 times this year's sales, and the company remains unprofitable on a GAAP basis. CrowdStrike turned profitable on a non-GAAP basis in fiscal 2022, and it expects its adjusted EPS to improve 59%-81% this year, but the stock still looks very expensive at over 300 times forward earnings.

Palo Alto's core security platform, Strata, primarily runs on its on-site firewall appliances. It's been named as a market leader in network firewalls by Gartner for nine straight years.

But over the past few years, Palo Alto aggressively expanded its portfolio of NGS (next-generation security) services -- which includes its Prisma cloud security platform and Cortex AI-powered threat detection platform -- with big investments and acquisitions.

In fiscal 2021, which ended this July, Palo Alto's NGS services generated $1.18 billion in annual recurring revenue (ARR), representing roughly 28% of its top line and surpassing its prior ARR guidance of $1.15 billion. That segment's accelerating growth complemented the stable growth of its on-site appliances and services, and its total revenue increased 25% for the full year.

Palo Alto serves more than 85,000 customers today, compared to about 9,000 customers nine years ago. It expects its revenue to rise 24%-25% in fiscal 2022, and its stock trades at about nine times that forecast.

Palo Alto isn't profitable by GAAP measures yet, but it's been profitable by non-GAAP measures for several years. It expects its non-GAAP earnings to grow 16%-18% this year, and its stock trades at just over 50 times forward earnings. Palo Alto's stock isn't cheap, but its valuations look more balanced than CrowdStrike's.

CrowdStrike and Palo Alto Networks are both well-run cybersecurity companies. However, I believe CrowdStrike's high valuations will continue to limit its upside potential, especially as rising bond yields and other macroeconomic shockwaves discourage investors from buying frothier growth stocks.

Palo Alto is also exposed to those macro headwinds, but its cooler valuations and steadier growth rates should make it a more stable investment. Therefore, I'm willing to buy more shares of Palo Alto right now, but I wouldn't touch CrowdStrike stock until it cools off a bit more.