Which semiconductor heavyweight is the better long-term investment?

ASML (ASML -1.29%) and Intel (INTC -1.95%) are two of the most important semiconductor companies in the world. ASML is the top supplier of photolithography systems, which are used to etch circuit patterns into silicon wafers. Intel is the top producer of CPUs for PCs and data centers.

ASML is also the world's only provider of high-end EUV (extreme ultraviolet) systems, which are used to manufacture the world's smallest chips. That's why it's a key partner for Intel, which owns a small stake in ASML, as well as its top foundry competitors TSMC and Samsung. 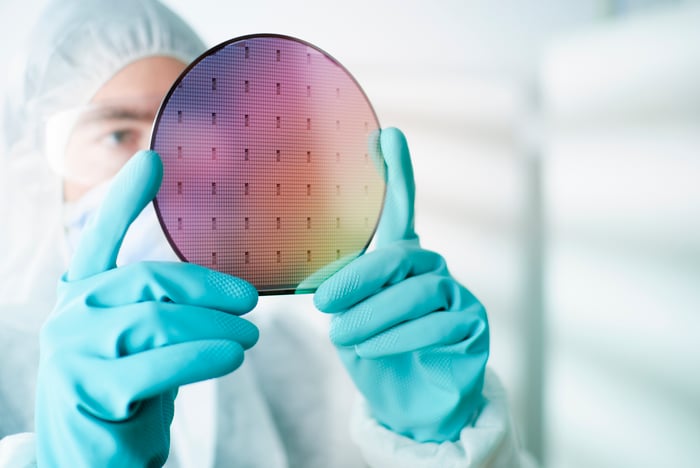 ASML and Intel both attracted a lot of attention throughout the global chip shortage, which started in late 2019 and worsened throughout the pandemic. But over the past three years, ASML's stock surged about 300% as Intel's stock rose less than 15%.

ASML benefited from the market's insatiable appetite for new photolithography systems, while Intel struggled with ongoing shortages, delays, and manufacturing issues. Let's take a fresh look at both companies and see if ASML remains a stronger investment than Intel.

ASML continues to fire on all cylinders

ASML's revenue rose just 8% in 2019 as the global glut in memory chips curbed the market's appetite for new systems. However, its revenue increased 18% in 2020 as the memory market stabilized and the top foundries boosted their capacity to cope with the surging demand for new chips.

In the first half of 2021, ASML's revenue rose 45% year over year as its EPS soared 110%. Analysts expect its full-year revenue and earnings to grow 35% and 58%, respectively, as TSMC, Samsung, and Intel install more EUV systems. All three foundries are spending billions of dollars on building new plants, and a lot of that money will flow to ASML.

Next year, analysts expect ASML's revenue and earnings to increase 15% and 22%, respectively. Its growth will likely decelerate as the chip shortage ends, but its business should keep expanding over the long term as it rolls out its next generation of high-NA EUV systems -- which will be used to manufacture chips that are even smaller than today's tiniest chips.

Intel prepares for a painful turnaround

Intel's revenue grew just 2% in 2019, but rose 8% in 2020 as it shipped more PC and data center chips throughout the pandemic. The shift to remote work boosted demand for new PCs, while the heavier usage of online services forced data centers to upgrade their hardware.

Intel's adjusted EPS rose 6% in 2019 and grew 9% in 2020. However, it boosted its EPS with billions of dollars in buybacks throughout both years instead of allocating that cash toward improving its R&D and manufacturing capabilities. That trend worried investors, since Intel had already fallen behind TSMC and Samsung in the "process race" to create smaller and more advanced chips.

In the first half of 2021, Intel's revenue dipped 1% year over year as its EPS fell 18%. Those declines can be attributed to its market-share losses to AMD (AMD -4.55%) in the PC and data center markets, as well as tough comparisons to the pandemic's initial impact a year ago.

Analysts expect Intel's revenue and earnings to decline 6% and 10%, respectively, this year. Intel's new CEO Pat Gelsinger, who took the helm in February, plans to aggressively expand Intel's manufacturing plants to reclaim the process lead from TSMC by 2025. That's an ambitious goal, but there's no guarantee that it will succeed and reverse its market losses to AMD -- which currently outsources the production of its chips to TSMC's superior foundries.

ASML trades at 47 times forward earnings, while Intel has a much lower forward P/E ratio of 11. However, ASML's near-monopoly in photolithography systems, its role as a linchpin of the global semiconductor market, and its robust growth rates all justify that higher valuation. Meanwhile, Intel's stock deserves a lower valuation because it faces a grueling uphill battle against TSMC and AMD.

Intel's downside potential could be limited at these levels, but ASML has a lot more upside potential -- especially as the global chip shortage drags on and highlights the importance of its EUV systems.