Please ensure Javascript is enabled for purposes of website accessibility
Log In Help Join The Motley Fool
Free Article Join Over 1 Million Premium Members And Get More In-Depth Stock Guidance and Research
By Nicholas Rossolillo, Anders Bylund, and Billy Duberstein – Oct 3, 2021 at 7:00AM

Some high-growth stocks have been beaten up in 2021, but have plenty of good things happening in their favor.

After an epic 2020 in which the world was forced further down the digital path, some high-flying growth stocks have struggled in 2021. It's not necessarily the businesses themselves that are hurting. On the contrary, business is fine. But shares of some stocks are lapping a boom in sales in 2020, and slower growth rates have temporarily sent some investors for the exit.

A rally could be ready to emerge for some of these tech names in the final quarter of the year. Three Fool.com contributors think Teladoc Health (TDOC -3.40%), Amazon (AMZN -0.77%), and Splunk (SPLK -0.06%) are thus worth some attention.

Nicholas Rossolillo (Teladoc Health): Teladoc stock continues its precipitous fall and is currently nearly 60% down from all-time highs notched early in 2021. Understandably, investors that just made a purchase within the last year are none too happy right now.

A myriad of potential issues have cropped up -- besides the fact that optimism on Teladoc's leading virtual healthcare services might have been too high nine months ago. New competitors have gotten into the space, Amazon being perhaps the most concerning of the bunch given the long track record of disruption in other industries the e-commerce and cloud giant has. The economy is also reopening, which means in-person doctor visits have been happening again, and Teladoc's total visits this year aren't growing much (an expected 13.5 million to 14.0 million, compared to 10.6 million patient visits last year) compared to the booming visit growth in years past.

However, let's not forget that Teladoc wasn't simply a one-time pandemic winner. It was a fast-growing business (and stock) for years before COVID-19 was even a passing thought. Over the last trailing-five-year stretch, shares are up nearly 600%, and that's including the 60% drop from all-time highs.

As for the case that virtual care is becoming commoditized, that doesn't change the fact that Teladoc is way ahead of the curve with 52 million paying members in the U.S. alone, and has a new and fast-growing chronic care division (via the acquisition of Livongo Health this time a year ago). The digitization of healthcare is only just getting started, and I wouldn't balk at the lead Teladoc built up long before telehealth was a common service for the masses.

Now trading for only about 10 times expected full-year 2021 sales, a year-end rally is far from out of the question for this long-term, winning healthcare tech stock. Anders Bylund (Amazon): Mighty Amazon.com hasn't made a lot of noise this year. The stock has gained a measly 0.9% year-to-date and 4.3% over the last 52 weeks, falling far behind the broader market in both of these perspectives. At the same time, Amazon's business is booming. 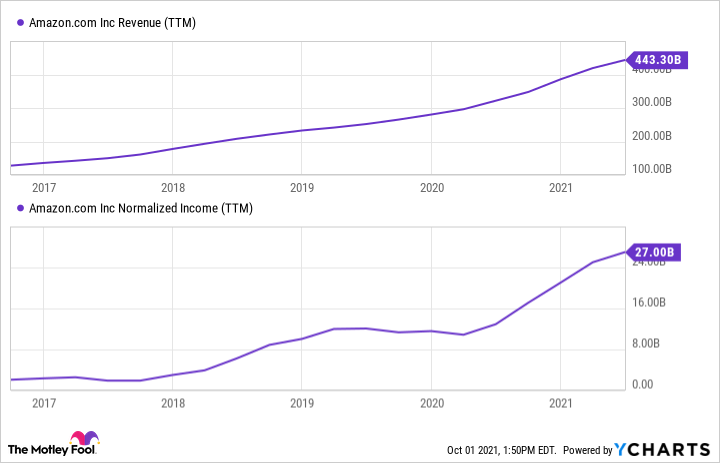 These disappointing returns do make sense from a certain point of view. The e-commerce and cloud-computing giant trades at 57 times trailing earnings and 235 times free cash flow, which is enough to give a value investor hiccups. That's the correct lens through which investors are supposed to view the largest stocks on the market, right? No sensible $1.7 trillion market cap could be treated like a high-flying growth stock.

Except, Amazon isn't acting like a sleepy trillion-dollar behemoth. That attitude just isn't in Amazon's nature. Founder and executive chairman Jeff Bezos famously wants the company to be managed as if every day is day one of a brand new start-up. And that's what we Amazon shareholders are getting. Over the last five years, the company boosted its top-line sales at a compound annual growth rate (CAGR) of 29% while earnings doubled every year.

This company has a long history of crushing the market while skeptics were calling it "overvalued." The situation we see today is nothing new. So when Amazon's skyrocketing stock takes a breather, like the one we've seen over the last 12 months, it just makes me want to buy more of this oversized growth stock.

This beaten down cloud stock is turning itself around

Billy Duberstein (Splunk): Observability and IT management software company Splunk has been bid down about 15% by investors this year, and is down a much uglier 40% from all-time highs set in mid-2020. 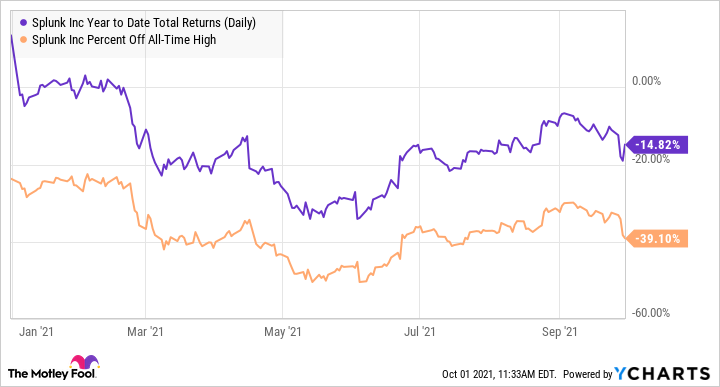 That's likely for two reasons; one, the market has tended to favor reopening and cyclical stocks this year, while cloud software companies with no current earnings -- and possibly no positive earnings for a while -- have been sold off on valuation concerns. Second, Splunk is an entrenched legacy software company making its transition from on-premise perpetual licenses to cloud-based subscriptions.

When a company goes from selling perpetual licenses on-premises to cloud subscriptions, the new accounting can often distort top-line revenue, even though its underlying growth rate is intact. For instance, in its last fiscal year, Splunk's revenue fell 5%, after three years of 30%-plus growth. However, that was because customers were transitioning from perpetual licenses, recognized all upfront, to cloud-based subscriptions, recognized over time. When looking at the company's measure of annualized recurring revenue (ARR), every quarter showed positive growth last year, and that continued with a strong 37% ARR growth last quarter. Cloud-based ARR, though only making up 37% of total ARR, grew an even faster 72%.

So the revenue shortfall doesn't appear to be a result of increased competition or an out-of-date product that would warrant concern; Splunk's net retention rate for its cloud services was 129% last quarter, meaning current customers are expanding usage of Splunk's IT monitoring tools.

The company also got a big vote of confidence earlier this year from esteemed technology private equity firm Silver Lake, who invested $1 billion in Splunk in the form of convertible preferred stock. Splunk has been using the proceeds not only to invest in growth but also repurchase common shares while they are down. Management repurchased about $250 million in common stock last quarter around $138. It's a fair assumption that as long as Splunk's share price sits below the preferred stock's conversion price of $160, it will continue to repurchase shares.

In any case, it's a favorable setup for Splunk. As enterprises become more digitized and distributed, its monitoring and security services will continue to be in demand. Cloud services also reached 50% of bookings last year and should continue to grow. As cloud ARR makes up a large portion of total ARR, Splunk's growth rate should remain strong, and possibly accelerate.

Meanwhile, Splunk's stock sells at just 8.8 times last quarter's ARR, which is quite cheap for a software-as-a-service company growing its top line in the high 30% range. So today's buybacks should also be accretive to shareholders when looking past the transition.

It's been a long slog for Splunk shareholders over the past year, but this favorable setup just made me purchase Splunk shares for the first time in recent weeks. I expect a much better end of 2021 and beyond.