Investors need to balance risk and growth when choosing between Apple stock and the Nasdaq index.

Apple (AAPL -1.38%) and the Nasdaq have both delivered excellent returns for shareholders since the market rebounded from the COVID-19 crash a year and a half ago. Investors poured cash into large-cap tech stocks as businesses and consumers adjusted to the pandemic economy.

Which one is better for you moving forward? The answer depends on a few personal factors, but the most important pieces of information should help guide your decision if you're considering buying one or the other. 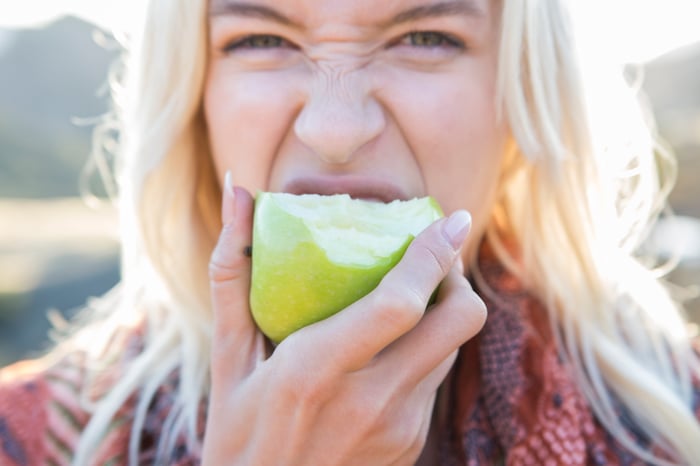 In many ways, the better buy here boils down to the classic choice between indexing and stock picking. You certainly could purchase every Nasdaq stock individually, but it would be much simpler for most investors to use an index fund such as the Invesco QQQ Trust (QQQ -0.41%), which tracks the Nasdaq 100.

Index funds are designed to be purchased and held for the long term, and they are an efficient way to diversify your portfolio. If you hold a large number of stocks, you decrease the likelihood of any single stock dragging your performance down, while simultaneously increasing the likelihood of owning the best-performing stocks. That balanced approach of risk and reward is popular for a reason.

However, the indexing approach isn't ideal for everyone. Index funds might dilute risk, but they also cap your upside. It's not all that unheard of for high-flying stocks to climb 200% in a single year, but a 50% return in a single year would be incredible for a major stock index.

Your appetite for risk and your need for growth ultimately dictate the best buy for your portfolio. A retiree with low diversification and low risk tolerance probably shouldn't be sinking too much of their assets into a single stock. It's a different story for a younger growth investor who is looking to add a new stock to an existing portfolio with a few dozen positions.

Looking at historical results, it's clear that Apple has provided more growth upside. Since 2005, the Invesco QQQ Trust has returned an impressive 928%. However, even that stellar performance has been dwarfed by Apple's 14,000% return over the same period. 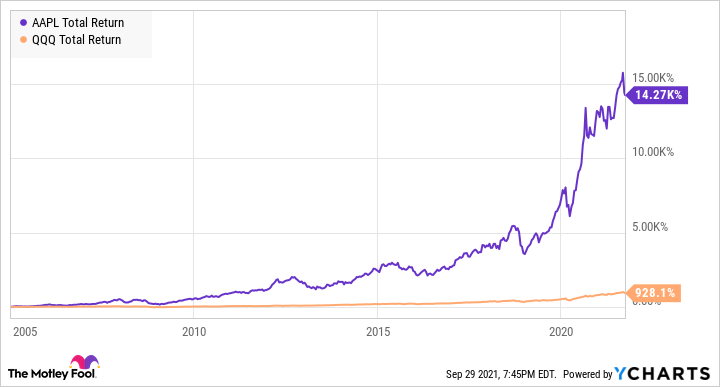 That's compelling historical performance, but keep that oft-cited disclaimer in mind -- "Past performance is no guarantee of future results." You'll notice that Apple's outperformance relative to the Nasdaq gets less impressive over shorter time periods. In fact, the market index has surpassed Apple over the past 12 months and year to date. 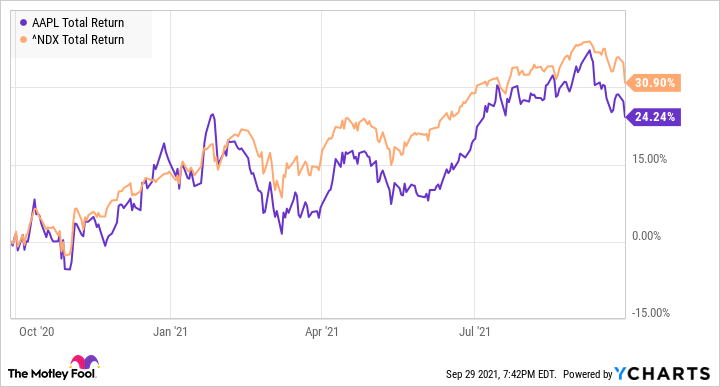 Apple has matured from a promising consumer electronics company to one of the global tech leaders. In many ways, it fulfilled its potential. Its target markets are already heavily saturated by Apple or one of its direct competitors, and there's no guarantee that the company will ever develop something as revolutionary as the iPod or iPhone again. At the moment, the company doesn't have the same avenues to rapid growth that were available in prior years.

Apple absolutely has a favorable growth outlook, but there's a good chance that its explosive days are behind it now that it's achieved such massive scale.

Having your cake and eating it too

The Nasdaq itself captures a lot of Apple's upside. Apple is actually the largest constituent of the Nasdaq, and the broader index is heavily skewed toward other huge tech stocks. You'll notice from the second chart above just how closely correlated the two securities are. If Apple's biggest days are truly behind it, you can still use the Invesco QQQ Trust to jump on board stocks like Tesla, Nvidia, PayPal, and Facebook.

If you have high conviction that Apple is about to enjoy several years of accelerating growth through new product launches, then it might make sense to buy some shares. If you're not so sure that Apple can accelerate, then you need to consider the merits of an alternative. There's a good chance that the Nasdaq can give you all the upside of Apple while significantly diluting the risk. Most investors should probably opt for the index fund in this case.