Figure out if your state is going to tax your Social Security benefits in retirement.

Income is the most important aspect of retirement planning, and Social Security is the biggest income source for most retirees. If you're approaching your golden years, it's wise to take inventory of your cash needs and sources of income. That planning will help you determine the best age to take Social Security benefits, how to spend down your 401(k) or IRA, and how to structure your pension payouts. You need to understand the tax implications of any retirement income decisions you make, so it's important to figure out how your state taxes Social Security.

States with no income tax

There are seven states that have no income tax at all. If you live in any of these, you'll receive your Social Security benefits tax-free at the state level. These states are:

This is obviously attractive for anyone earning wages or receiving passive income, but it can be especially meaningful for retirees on a fixed budget. The average household spends about $48,000 per year in retirement, so that 5% to 10% saved on state income tax could easily keep an extra $400 in your pocket each month.

There are an additional two states that don't levy taxes on earned income or Social Security benefits:

While it's great that Tennessee and New Hampshire don't take any taxes out of your Social Security benefits, both of them still tax dividends and interest. That's relevant for the roughly half of retirees who have investment accounts that generate income. 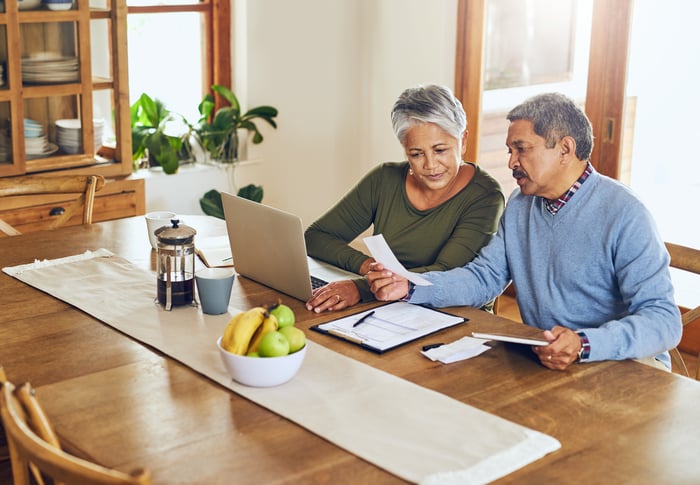 This leaves 41 states that do collect income tax revenue, but most of them allow residents to deduct Social Security benefits from their taxable income. If you live in one of these states, then your Social Security isn't taxed.

Additionally, the residents of the District of Columbia are able to deduct Social Security from their taxable income.

There's really no reason to disparage tax-free income, but residents of the above states should also consider other forms of taxation. Most states collect property tax, with New Jersey, Illinois, New Hampshire, Connecticut, Vermont, and Texas being among the highest.

Sales tax is another popular revenue source for many states, which is relevant if all of your retirement income is spent on consumption. California residents pay a 7.25% tax on non-essential purchases. It's 7% in Indiana and Mississippi. Several more states charge between 6% and 7%. Sales tax generally isn't applied to groceries, clothing, medical services, and basic needs, so keep that in mind when you're building a retirement plan.

It's important to consider the impact of various taxes when building a budget and assessing the purchasing power of your retirement income.

That leaves us with the 13 states that don't deduct Social Security from taxable income.

Before residents of these states get too angry about their retirement lifestyle going out the window, know that most of them do offer some breaks. Many of them allow retirees to fully deduct Social Security income as long as their income doesn't exceed a certain level. Those thresholds can get as high as $100,000 for married couples in a few of those states. Most people actually won't pay state income tax on their Social Security benefits, even in the places that don't offer blanket exemptions.