The best answer, for now, is maybe.

There's a new front in the fight against COVID-19. And Merck (MRK -1.87%), along with its partner Ridgeback Biotherapeutics, appears to be the leader.

The drugmaker is evaluating its oral antiviral therapy PF-07321332 in a couple of phase 2/3 studies, one in treating COVID-19 patients and another as post-exposure prophylaxis. Could Pfizer's COVID pill be even better than Merck's? 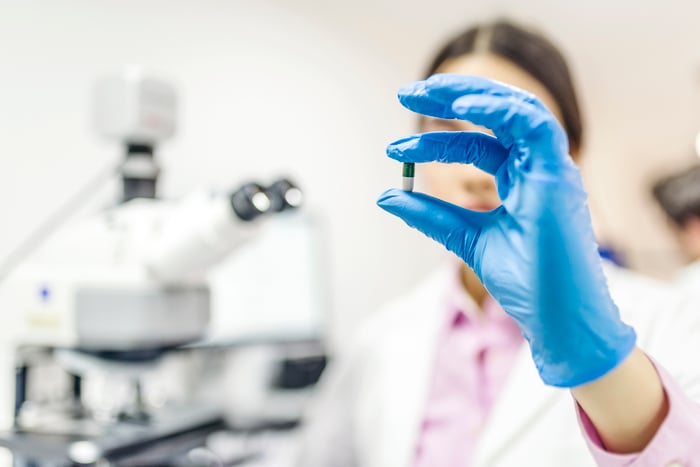 How Pfizer's pill is different

Merck's molnupiravir and Pfizer's PF-07321332 share a couple of key things in common. They're both antiviral therapies that attempt to prevent the coronavirus that causes COVID-19 from replicating. They're also both administered orally as pills, a major advantage over the only approved antiviral therapy for treating COVID-19 on the market right now, Gilead Sciences' (GILD -1.68%) Veklury, which is given intravenously.

However, there are also some significant differences between Merck's and Pfizer's pills. For one thing, molnupiravir is a repurposed drug that was initially targeted to treat flu patients. Pfizer developed PF-07321332 from the ground up to target the coronavirus.

The two drugs also have different mechanisms of action. Molnupiravir inhibits the replication of the virus by interfering with how it copies RNA. PF-07321332 inhibits the activity of the primary protease enzyme that the coronavirus needs for replication.

Also, Pfizer's pill will be given along with a low dose of ritonavir, another antiviral therapy that's currently used to treat HIV. The addition of ritonavir is intended to slow the breakdown of PF-07321332 and help it remain active for a longer period of time.

However, there's one potential concern for molnupiravir that wasn't referenced with the phase 3 data: It's possible that the drug could cause genetic mutations. Actually, the way the therapy works is by introducing errors into the viral genetic code.

Merck has stated that its data indicates molnupiravir isn't able to induce genetic mutations in human cells, but Nicholas Kartsonis -- the company's senior vice president of clinical research-vaccines and infectious diseases -- said that Merck won't know if the drug might impact sperm cells until reproductive toxicology data is available.

Because of potential safety concerns, male and female patients in Merck's clinical trials evaluating molnupiravir were told to abstain from sexual intercourse or use contraception while taking the therapy and for at least four days afterward. Also, the study protocol required women of childbearing age to have negative pregnancy test results before taking molnupiravir.

To be sure, Pfizer's addition of ritonavir with PF-07321332 could present some concerns as well. The older antiviral drug can cause gastrointestinal side effects. It can also interfere with other drugs that patients are taking. On the other hand, those issues aren't as serious as the possibility of birth defects with molnupiravir.

It's quite possible that Pfizer's COVID pill will be better than Merck's molnupiravir from a safety and/or efficacy standpoint. However, we don't know how PF-07321332 will fare in its late-stage studies while we do know how strong molnupiravir's interim results were. The old adage that "a bird in the hand is worth two in the bush" seems relevant here.

Merck's share price experienced a nice boost after the company announced the results for molnupiravir last week. Pfizer could have its turn fairly soon. The company's phase 3 study in low-risk outpatients wraps up this month, while its late-stage study in high-risk outpatients concludes in November.

Both of these pharma stocks could deliver nice gains for investors thanks to their oral COVID-19 therapies. The market should be big enough to support multiple winners.