Retail investors have more ability than ever to share and spread their ideas about stocks thanks to the growing popularity of internet message boards like Reddit, where the popular subreddit WallStreetBets has attracted nearly 11 million members.

A crowd that large can collectively unearth a ton of investment ideas, and while those traders may sometimes focus on potential short-term opportunities of questionable long-term value, I see two popular "Reddit stocks" as having the makings of great holdings for the long haul.

The automotive industry has been grappling with the rising popularity of electric vehicles ever since Tesla revolutionized the niche over a decade ago and succeeded in building a mainstream brand. Now, a crowd of start-ups and legacy automakers are racing to bring large numbers of new electric models to market, and the overall automotive industry looks as though it's on course to (someday) phase out the internal combustion engine. The electric vehicle market is forecast to grow at an annualized rate of 33.6% through 2027, steadily building market share. 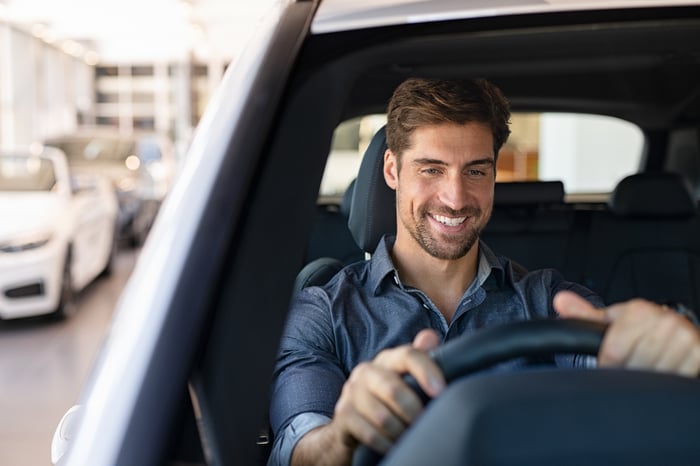 Lucid Group (LCID 0.81%) is among a handful of electric vehicle start-ups that have gone public to secure the funds they require to design, build, and launch a new automotive brand. Its CEO, Peter Rawlinson, came from Tesla, where he had been a vehicle engineer for the Model S, that company's first mainstream production car.

Most of these start-ups (Lucid included) haven't delivered vehicles yet, so they have virtually no revenue. That's a risk that investors need to consider. At the same time, Lucid has a market cap of $39 billion -- huge, considering that it's pre-revenue.

So what suggests that Lucid would make a good long-term holding for investors to buy now? Those who already own shares likely bought in because they believe that Lucid's technology and execution will help it become a prominent competitor in the automotive industry. The two key factors that will determine whether this happens will be the company's technology and its funding.

Rawlinson brought deep technical experience in the EV industry to the company from his days with Tesla. While we haven't yet seen production models of its flagship Lucid Air delivered, the test models of the vehicle have received rave reviews. The EPA assessed it as having an estimated range of 520 miles on a single full charge. That exceeds the ranges of all of Tesla's models, and is the longest official range to date for an electric vehicle of any kind.

As of July, Lucid still had roughly $4.4 billion in cash left on its balance sheet from the SPAC merger that took it public, which management expects to be enough to fund the business at least through 2022. Given that production of the Lucid Air began this month, the company should have the financial wherewithal to begin ramping up deliveries.

There is a lot of anticipated growth already priced into Lucid's shares, but the stock would have further attractive upside if the company can grow into a serious Tesla rival. The electric vehicle market could have decades of growth ahead of it, and so far, Lucid's technology looks like it could make a mark on the industry.

The internet has created massive amounts of data over the past decade -- data that governments and companies are now trying to better analyze and control. Today, the average person generates 1.7 megabytes of data every second via their ordinary activities -- everything from sending emails to shopping, from posting on social media to clicking on a website.

This data can give businesses more insight into customer behavior, help governments detect crime or manage important missions, and aid banks in spotting fraudulent activity, among many, many use cases. According to the analysts at Statista, big data is on track to be a $107 billion industry by 2027.

Palantir Technologies (PLTR 0.71%) is a data analytics company that uses software to integrate data from various sources and identify patterns and insights to help its users make decisions.

Think of someone dumping a giant jigsaw puzzle out on a table in front of you with thousands of pieces. Palantir's software organizes the pieces (data) and tells you which parts might fit together. The U.S. government is Palantir's largest customer, using its technology to fight terrorism, respond to natural disasters, and guard the country's borders, among other things.

Palantir's pipeline of booked contracts grew by 175% year over year in the second quarter to $925 million; that should translate into revenue growth as the contracts are carried out.

The company is striving to grow its business with private companies. It's also investing in various SPACs (special purpose acquisition companies) in the hopes that they will grow into larger customers down the road. Palantir's commercial customer base grew by 32% quarter over quarter in Q2, so momentum could be picking up here, which is something investors will want to keep an eye on. Over the next five years, Palantir expects to grow revenue at an annualized rate of about 30%.

Big data could be one of the most important investing themes of the next decade and beyond as the world moves further into the digital age. Palantir's ability to make data actionable for its customers could fuel years of growth for the company, making it an attractive long-term investment.

Is Lucid Stock a Buy Now?