While no one can predict what the stock market will do, it does have a history of dropping in the fall. According to Yardeni Research, September has offered the worst average returns for the S&P 500 since 1928, at -1%. October has been positive, on average; but some of the steepest sell-offs in history have occurred during the month. With the recent volatility, it's natural to review your holdings for companies that may be about to deliver more tricks than treats. 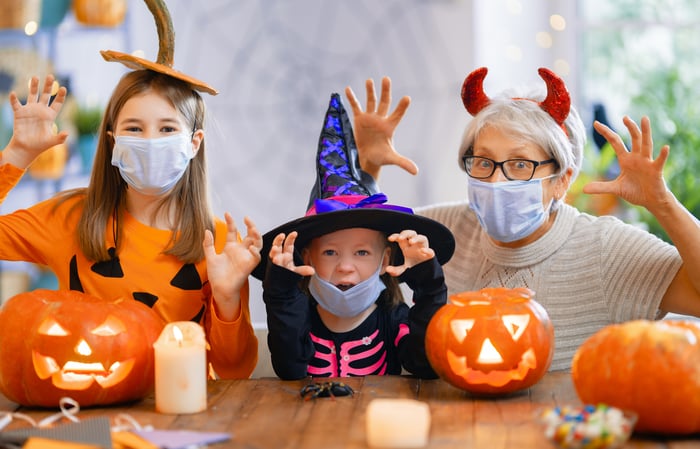 An aging population isn't enough for this senior living provider

Jason Hawthorne (Brookdale Senior Living): The number of Americans at least 65 years old is set to more than double over the next four decades. In just the next 20 years, it's estimated that one out of every five people in this country will be of retirement age. That bodes well for providers of senior living facilities. And Brookdale considers itself the premier provider in the space, serving mostly middle- and upper-income residents. The company has a 5% share of a highly fragmented market, and 65% of seniors live within 20 minutes of one of its facilities.

But demand is only one variable in the equation for a good investment. Brookdale has been simplifying its business by selling assets over the last few years, but it still has several attributes that concern me.

First, the company has $4.5 billion in debt. And despite rates being historically low, the amount of cash flow Brookdale generates hovers dangerously close to the interest they must pay to service that debt. Over the past 12 months, earnings before interest, taxes, depreciation, and amortization (EBITDA) are about the same as the interest paid. 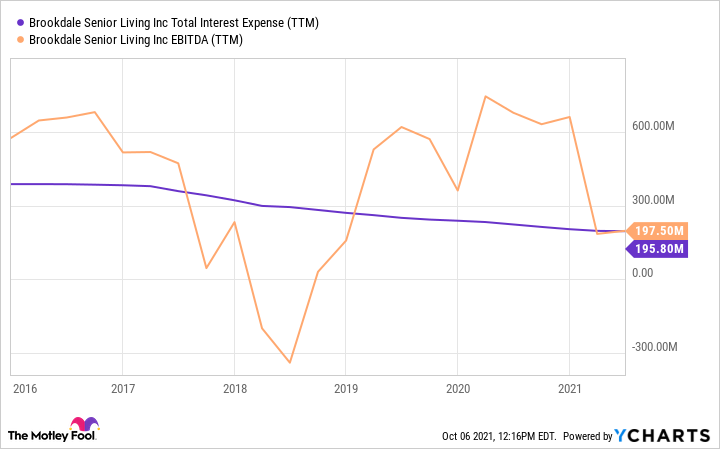 That's not always a problem. If a company is growing and cash flow is expanding, it can pay that debt off. That limits the cash available for investment, but it is a way to dig out of the hole.

In Brookdale's case, things are headed in the wrong direction; and the pandemic didn't help. Revenue has been consistently trending lower since 2016. Sales are down 39% in the nearly five years since peaking close to $5 billion. Of course, the pandemic is a big driver. But even 2019 revenue was only four-fifths of what it was in 2016.

Having barely enough EBITDA to cover the interest expense is typically a warning sign. Declining revenue is another. Add those red flags to the fact that shares are up 131% in the past year, and it makes the stock downright spooky. Despite offering a much needed service, I'm skeptical about Brookdale's return potential in the coming years. That's why I am avoiding the shares.

Rachel Warren (Novavax): Let me start by saying that I understand my stance on Novavax may be considered somewhat contrarian, to say the least, given the widely positive hype that's been surrounding Novavax over the past 18 months. The stock is trading up by about 55% year-to-date, and from March 2020 to the time of this writing, the stock has skyrocketed by an astounding 983%.

Of course, these astounding gains have been hinged upon high hopes about Novavax's much-anticipated coronavirus vaccine candidate NVX-CoV2373. However, as the success of the coronavirus vaccines already being distributed widely in the U.S. and around the world has gone from strength to strength, some of this excitement seems to be on shaky ground.

Novavax has repeatedly delayed filing for an Emergency Use Authorization for NVX-CoV2373 in the U.S. for a number of different reasons, most of which boil down to manufacturing issues; although management has said they expect to do so later this year. The company has faced some key setbacks to pursuing regulatory approval, not the least of which was when the federal government told the company earlier this year that it would cease funding the vaccine's development until the company dealt with some major quality control issues raised by regulators. Consequently, the stock has fallen by about 36% over the past month alone.

Personally, I'm an investor with a risk tolerance that falls somewhere in the mid-range. I typically prefer to invest in companies with a tried-and-true stable of successful products, a strong history of financial growth, and a clear path toward future successes that can yield long-term portfolio returns. Of course, that's not why most investors choose to buy shares of biotech companies like Novavax.

The potential promise of future profits from the two most advanced candidates in its pipeline (its coronavirus vaccine and its experimental seasonal flu vaccine NanoFlu), both of which have yielded extremely positive data in late-stage clinical trials, has continued to drive wide swathes of investors to buy more shares, hoping for high future returns when these candidates are eventually brought to market.

The sticky point for me with Novavax is the fact that this is a company that has been in business for well over three decades, but as of yet has not brought a single product to market. Although the company's revenue grew by a triple-digit percentage in the most recent quarter due to lucrative government funding and other existing contracts, its research and development costs are (unsurprisingly) also soaring, which is leading to eye-popping net losses. In the second quarter of this year, it reported a net loss of $352 million compared to the net loss of $18 million it reported in the year-ago quarter.

If and when Novavax does gain regulatory approval for NVX-CoV2373, which is widely expected to occur in the coming months, the edge that companies like Moderna, Pfizer, and even Johnson & Johnson already have in the coronavirus vaccine market could be tough to outshine. And with companies like Pfizer already working on oral COVID-19 drugs, the big names already operating in this space could seize up even more market share in the months ahead.

If you're an investor with a healthy level of risk tolerance and you firmly believe in the long-term staying power of Novavax as a quality investment, I'm not here to tell you that you need to stay away from the stock altogether; I just think there are far better buys in the coronavirus vaccine space and the healthcare industry in general to invest in. And if you tend to be a more risk-averse investor, companies like Pfizer or Johnson & Johnson -- both of which have been in business for well over a century and pay healthy dividends to boot -- might be more your cup of tea.

Seems safe but does it work?

Steve Ditto (Editas Medicine): Gene editing has tremendous potential to change the way we treat genetic diseases. Editas was founded by world-renowned genetic researchers and has a good shot at being a long-term market winner.

However, that doesn't mean it's going to be smooth sailing for Editas. In fact, the volatility could be downright scary for investors unaccustomed to the price swings of biotech companies. In the last two weeks, Editas' stock price has fallen almost 40%, versus 3% for the S&P 500, since announcing its latest clinical trial results.

Editas has been working on a CRISPR (clustered regularly interspaced short palindromic repeats) gene-editing treatment for Leber Congenital Amaurosis 10 (LCA10), which causes severe visual impairment. The good news is the trial appears to have been safe with no toxic side effects for six adult patients. Editas management reports the treatment was considered so safe they received approval to begin testing in children.

The bad news is the treatment didn't appear to be very effective at low-dose levels and only two of the three patients receiving a mid-dose treatment saw improvement. Although Editas is still going to test a higher dose in other patients, the underwhelming initial results raise the stakes, and experts are now questioning whether the treatment will be effective.

This less-than-hoped-for outcome also stands in contrast to the earlier backdrop of very positive CRISPR clinical trial results from competitor Intellia Therapeutics, who in June announced very strong efficacy, safety, and durability of its CRISPR treatment for a rare blood disease.

Editas seems to be walking a fine line here, balancing smaller doses to minimize adverse events while perhaps initially limiting the efficacy of the treatment. Had there been severe side effects, it would have negatively impacted not only Editas but all other CRISPR companies. Now, patience will be required while waiting to see if the treatment has the intended effect in kids with a mid dose and adults with a high dose.

For long-term buy-and-hold investors, the latest drop in price may make an attractive entry point. For others uncomfortable with the uncertainty and price volatility, it may make sense to sit October out and wait for more guidance from management on the next quarterly earnings call in early November.

Either way, the CRISPR gene-editing market is projected to reach $15 billion by 2028, and investors should keep an eye on developments to learn how they can participate in the coming Genomic Revolution.