Universal Orlando is closing Shrek 4D after nearly two decades of operation. Timing is everything in the theme park space.

It's not always shiny new additions at the country's leading theme parks. Comcast's (CMCSA -1.16%) Universal Orlando will be closing one of its oldest attractions in a few months. Shrek 4D -- a 3-D show packed with in-theater effects -- will close in January, just after the seasonal spike in holiday crowds head back home.

Themed to one of the highest-grossing franchises in animation history, Shrek 4D made its debut in 2002 -- the year after the first of four Shrek movies hit the silver screen. It's not one of the park's most popular attractions, but it's an interesting deletion, with Disney (DIS 0.85%) in the process of rolling out new rides and experiences in commemorating Disney World's 50th anniversary earlier this month. 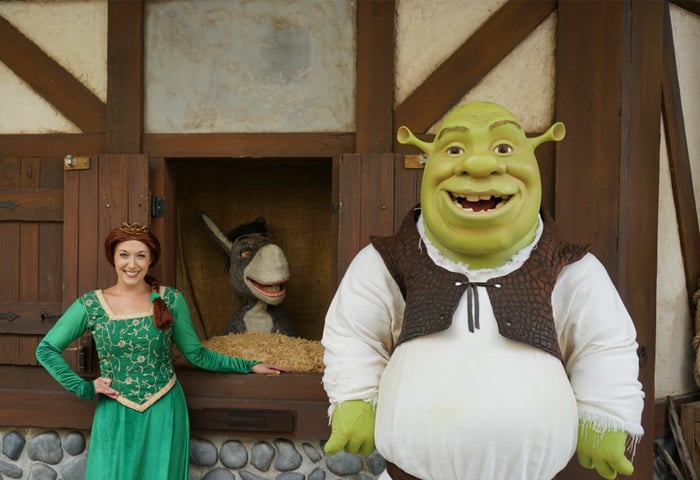 The photo op with the characters will stay, but the 3-D show and adjacent gift shop will go away in January. Image source: Universal Orlando.

It's a layered move by Comcast's Central Florida theme park that will actually be reducing its capacity by two high-volume attractions come January. Revenge of the Mummy -- a popular indoor roller coaster -- will also be shutting down in January for a months-long refurbishment. It expects to reopen next summer.

It's not fair to say that Comcast is retreating. Just a few months ago, VelociCoaster opened at Universal Orlando's Islands of Adventure theme park. It's a major white-knuckled roller coaster that has garnered rave reviews since its late springtime debut. It's also working an entirely new theme park. The potentially bar-raising Epic Universe is expected to open by early 2025 after a COVID-19-related construction delay.

Attractions aren't supposed to last forever, but Shrek 4D has been a park staple for almost two decades. It seems dated relative to some of Universal's newer attractions with fancier bells and whistles, but it's still surprising to see the family-friendly show go away. Shrek 4D opened as a licensed DreamWorks Animation attraction at the park, but five years ago Comcast acquired the computer animation studio. The move has opened the door for more rides and attractions themed to popular DreamWorks Animation releases.

Closing down Revenge of the Mummy for roughly half a year is another interesting move. It's a richly themed indoor coaster with some heavy theatrical elements. Disney World's biggest 2022 opening will be a Guardians of the Galaxy-themed indoor coaster that will also go through richly detailed show scenes. Unless Universal Orlando will be dramatically upgrading its own indoor thrill ride to compete, it may seem odd to have it closed when its rival's new ride opens.

At the end of the day, you can't blame Comcast for the timing of next year's disruptions. It had its moment earlier this year, with its Jurassic Park-themed scream machine, but now the spotlight has shifted a few miles southwest to Disney World. It will be hard to pry tourists from checking out Disney World and all of the new rides, attractions, and experiences it will unveil during the golden anniversary celebration. It will be by the time party fades in early 2023 that Comcast will be ready to win back the spotlight. If Comcast is smart, it will make sure it has a new ride or two to introduce in the spring and summer of 2023, whetting appetites ahead of Epic Universe's debut less than two years later.

Disney and Comcast aren't pure theme-park operators. They make up a third of the Big 6 media companies. However, their gated attractions are brilliant outlets to promote their theatrical franchises to the tens of millions of visitors who check out their theme parks every year in Florida and California. They know when to attract attention. They also know when to yield to the competition.