October has gotten off to a good start, but there could still be volatility in the market. Here are three stocks to buy this month.

After a volatile September, the market has gotten off to a solid start in October, with the S&P 500 index notching five of the first six days in the green. Historically, October has proven to be a good month for the market, but a lot of uncertainty remains with the delta variant still lingering, bond yields on the rise, the Federal Reserve talking about tapering its bond purchases, and with the debt ceiling debate in Washington bound to arise again before the end of the year. With all of the uncertainty, a panel of Motley Fool contributors has put together a trio of three top stocks to buy this month: Silvergate Capital (SI 5.04%), StoneCo (STNE 1.36%), and Universal Display (OLED -0.18%). Here is why each of these three picks has the potential to win big long-term.

Bram Berkowitz (Silvergate Capital): Silvergate Capital has absolutely taken off recently, with shares up roughly 30% over the past week. Over the last year, the stock is up 863%. While Silvergate looks expensive, I believe the reward could be more than worth it with the amount of earnings potential at this bank, which operates in the cryptocurrency space.

Silvergate Capital has built a proprietary payments system called the Silvergate Exchange Network, which allows two parties on the network to clear transactions in real time 24 hours a day, 365 days per year. This has made the platform attractive for institutional traders and crypto exchanges that trade Bitcoin and other cryptocurrencies because cryptocurrencies trade around the clock. SEN has enabled Silvergate to add a lot of clients who bring in zero-cost deposits and that it can also cross-sell other more traditional banking products to, which brings in fee income.

In just the first half of the year, SEN has onboarded a ton of new clients, enabling the bank to grow from roughly $5.3 billion in deposits to more than $11 billion. Deposits have grown so fast that Silvergate has invested more than half of its total assets into securities yielding just 1.35% on average. This makes Silvergate incredibly asset-sensitive, meaning that when rates rise more of its assets will reprice higher with interest rates, while many of its zero-cost deposits will not move higher, increasing the bank's margins. According to Silvergate's most recent regulatory filing, a 1% move in the Federal Reserve's federal funds rate would send net interest income at the bank, essentially the money the bank makes on its loan and securities portfolios, up nearly 52% over the next year. To add some perspective, Bank of America, one of the most asset-sensitive banks, would only see net interest income rise about 20% in a similar situation.

Silvergate also has an absolutely enormous opportunity in the stablecoin space. Stablecoins are are digital assets pegged to a commodity or another currency like the U.S. dollar. SEN currently serves all of the major U.S. stablecoin issuers, enabling them to use the platform to mint and burn digital coins. Recently, Silvergate struck a big partnership with Facebook to become the exclusive issuer of the social media giant's U.S. dollar stablecoin, called Diem. If successful, Silvergate will be able to make money on fees through the minting and burning of Diem, make more net interest income by managing the U.S. dollar reserves Diem is tied to, and have more banking customers to cross-sell to. And think about how large Facebook's audience is. If Diem catches on, it could be an enormous driver of revenue for Silvergate.

While Silvergate does move in correlation with the price of cryptocurrencies and is impacted by them, it also does not hold any on its balance sheet or mine them, which in my opinion gives it less exposure than a pure-play cryptocurrency stock. 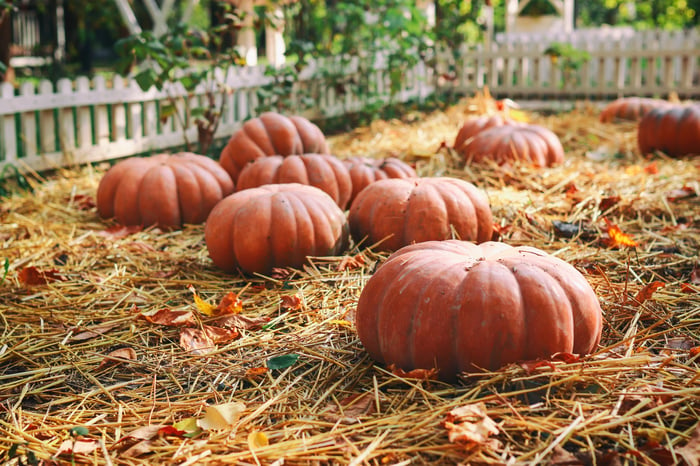 Get a piece of Latin America's fintech revolution

Keith Noonan (StoneCo): E-commerce is poised for huge long-term growth in Brazil and other Latin American markets, and consumers in these territories will almost certainly continue moving toward card and mobile-based payments and making increased use of banking services. StoneCo is a financial technology services company that's helping to facilitate these shifts, and investors with a long-term time horizon should consider taking advantage of recent sell-offs for the stock.

StoneCo's share price tanked after the company posted disappointing quarterly results at the end of August, and the stock is now up just 9% from market close on the day of its initial public offering in 2018. 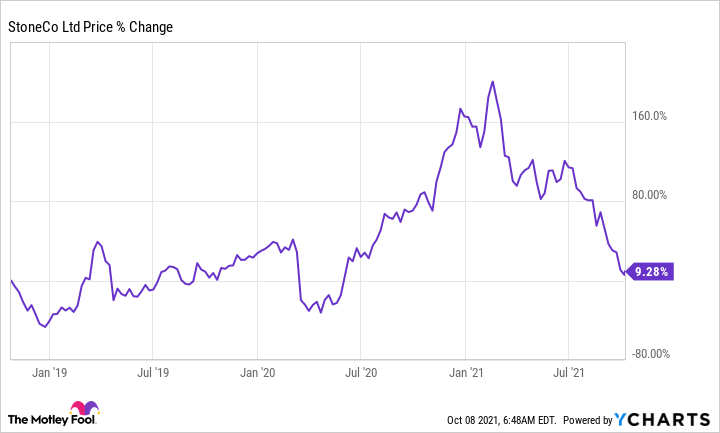 StoneCo's revenue slumped 8% year over year in the second quarter due to problems with the company's credit business and broader issues with Brazil's credit registry system. Relatively high inflation and political tensions in Brazil haven't helped matters either.

On the other hand, the company continued to add new small and medium-size business clients at an impressive clip, bringing more than 140,000 new merchants on board its platform in the quarter. Total payment volume for merchants in the category jumped 104% compared to the prior-year period, and the core business still looks quite strong.

StoneCo currently trades down roughly 64% from its 52-week high. The company has a market capitalization of about $10.5 billion and is valued at approximately 74 times this year's expected sales. That earnings multiple might look daunting in the context of recent setbacks facing the business, but the company's growth outlook remains promising, and shares look cheap at current prices.

Between increasing adoption for credit cards and e-commerce in Brazil, StoneCo has some favorable tailwinds at its back, and the company has already established itself as a leader in Latin American fintech. The stock could deliver big wins for investors who are willing to look past some turbulence in the near term.

OLED screens are getting cheaper, and so is OLED stock

Suffice to say Universal Display is still a long-term growth stock given the massive potential it has yet to unlock as devices gradually undergo an upgrade from legacy LED screens. Revenue is up over 160% over the trailing-five-year stretch, but Universal's partner manufacturing companies have been quickly ramping up OLED capacity. More expansion is on the way.

However, since Rosenblatt's comments a few weeks ago, Universal's stock has been bludgeoned. Shares are down some 28% from early August. Higher interest rates (which lower the value of a company's future profitability), political uncertainty (the debt ceiling in the U.S. and China's real estate developer troubles), and worry through the summer and early autumn because of delta variant cases have weighed on the stock.

Universal Display thus looks like a great long-term value right now. Sure, the stock trades for 56 times trailing-12-month free cash flow, but this is a company that is growing at a double-digit percentage (expected 30% full-year sales growth), and the bottom line has consistently grown at an even faster rate over time. Plus, Universal had $733 million in cash and equivalents on balance at the end of June (nearly 10% of the entire company's market cap) and no debt. A steadily rising dividend currently yielding 0.5% sweetens the deal, too. Put simply, this is a fantastic tech company for the long haul that just went on sale.

This Crypto Bank Keeps Getting Cheaper: Is It Worth the Risk?

My Top Bank Stock To Buy and Hold Forever

1 Beaten Down Growth Stock That Could Soar, According to Wall Street
376%