A big trend in the stock market this year has involved so-called meme stocks. Select companies that Wall Street funds bet against as loser stocks saw their shares quickly skyrocket in price thanks to individual investors buying in after teaming up through social media sites like Reddit to hurt the short-sellers.

One stock that got a lot of attention for getting sucked up into this craze was AMC Entertainment Holdings (AMC). The struggling movie-theater chain was severely hurt by lockdowns during the pandemic, but somehow its stock price has surged more than 1,600% in 2021.

If you are tempted to jump onto this meme stock bandwagon, I would urge you not to. Late participants are more than likely to wind up losing out in the end. Instead, you might want to consider these two outstanding businesses that famed investor Cathie Wood and her ARK Invest firm have large holdings in. While there are always risks, it's likely a safer and potentially more rewarding approach than buying meme stocks.

1. Roku: The TV operating system of the future?

What makes the streaming-TV platform a fantastic company is that it connects dozens of popular streaming services, including Netflix, Walt Disney's Disney+, and Amazon Prime,  with viewers who want easy access to all their streaming entertainment options in one place. It also provides a place for organizations looking to target advertisements to a wide audience. Roku has created a three-sided ecosystem that will continue to benefit as the world shifts from cable TV to one dominated by streaming entertainment.

Roku's second-quarter revenue of $645 million was up 81% year over year, and its 55.1 million active accounts streamed 17.4 billion hours of content in the quarter. Most people are familiar with Roku as a maker of media sticks and players. But the company actually makes most of its money from the platform segment, which derives high-margin revenue from subscription and advertising fees. Roughly 83% of Roku's sales in the latest quarter came from this segment, which has a 65% gross profit margin.

The stock currently trades at a steep forward price-to-sales ratio and price-to-earnings ratio of 15 and 245, respectively. But consider that the company has far exceeded Wall Street's earnings expectations in each of the past four quarters and has a 12-month price target from analysts that projects 43% upside. Consider too that Roku currently only operates in the U.S., Canada, and the U.K. There are still hundreds of international markets to expand into. And with 1.2 billion broadband-enabled households and 1 billion cable-TV subscriptions worldwide today, Roku has a massive untapped opportunity to grow as streaming becomes more popular. 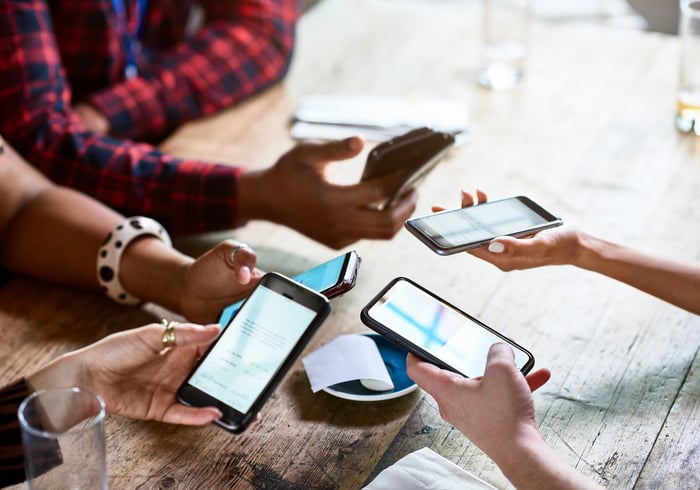 As a leading fintech, Square (SQ -1.43%) is out to disrupt the outdated financial services industry. Its Cash App currently has 40 million monthly active users and generated $546 million in gross profit in the second quarter, which was up 94% from the second quarter of 2020. Cash App lets individuals send and spend money, set up direct deposit, and trade in stocks and cryptocurrencies like Bitcoin -- all from an easy-to-use, consumer-friendly interface.

Square's Seller ecosystem provides a suite of 30 different software, hardware, and financial services tools to help small businesses accept payments, manage payroll, handle customer relations, and do a host of other tasks. Of the total $38.8 billion in gross payment volume (GPV) this segment processed in the second quarter, the merchants' segment that processes at least $500,000 in GPV annually represents the biggest customer group. This is a positive sign that Square is attracting larger sellers onto its platform.

The company's ability to integrate and strengthen the connection between the Cash App and Seller ecosystems is a serious competitive advantage. Square recently announced that it was purchasing buy now, pay later leader Afterpay with immediate plans to bring the Australian fintech's 16.2 million consumers and 98,000 merchants onto Square's platform. Square also introduced a feature called Cash App Pay that allows users to check out at Square merchants online and in-store with their existing Cash App balances. These initiatives will drive higher engagement and customer stickiness over time.

Wall Street analysts are calling for earnings to jump 618% from 2020 through 2023, which easily justifies the hefty forward P/E ratio of 129. Two ETFs in Wood's ARK Invest cohort own roughly 4.1 million shares ($951 million), and maybe you should, too.

Ignore the meme stock craze and focus on winners

An investing superpower is ignoring the latest hype, including the meme stock craze. Smart investors like Cathie Woods' ARK Invest are better off buying shares of high-quality and fast-growing businesses. Roku and Square represent those opportunities today.