Since going public, this streaming leader's stock has skyrocketed almost 1,300%. But is it a good buy today?

Investing in the stock market with a long-term time horizon offers a great path to building massive amounts of wealth. To illustrate, consider that a $10,000 investment in the S&P 500 50 years ago would be worth more than $1.1 million today. The magic of compound interest rewards those with patience. 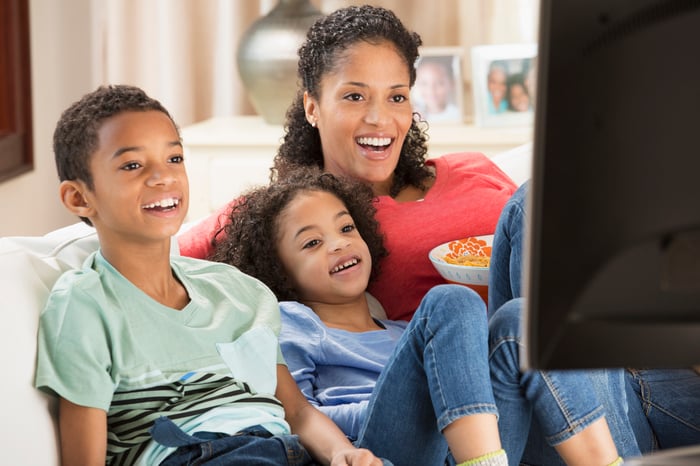 Roku makes money by selling those popular media sticks and players as well as from subscription and advertising fees on its platform. The device sales accounted for just 17.5% of revenue in the most recent quarter, a figure that has fallen over time and demonstrates the dwindling importance of this segment. The platform business, on the other hand, grew sales 117% year over year and now represents 82.5% of total revenue. Roku's platform also carries an outstanding gross margin of 64.8%.

In the U.S., it is estimated that 27% of households will get rid of their traditional cable-TV subscriptions in 2021, which is the tailwind supporting the rise of streaming entertainment. Roku stands to gain immensely from this shift in consumer behavior.

It doesn't matter which of the content services, like Netflix, Disney+, or HBO Max, ends up with the most customers. Roku simply provides an easy-to-use interface that allows viewers access to all of their entertainment options in one place, so it benefits no matter what. What's more, large organizations such as Walmart are increasingly recognizing the advantage of targeting ads to a streaming audience, something that wasn't possible before.

This three-sided ecosystem, consisting of viewers, content companies, and advertisers, is Roku's competitive advantage. It's a virtuous cycle driven by a network effect, where the sheer amount of content watched (17.4 billion hours in the second quarter) immediately attracts streaming services that want to gain more customers and corporations looking to spend advertising dollars.

These characteristics put Roku in a very favorable competitive position.

Roku is the No. 1 streaming TV operating system in the U.S., as approximately one-third of new smart TVs sold domestically come equipped with the company's operating system installed. Since there are many households that still don't even have one smart TV, this is definitely a great position for Roku to be in.

With most of its revenue coming from the U.S. today, there is a huge untapped opportunity in other countries. "There's still room to grow in the U.S., and there's even more room to grow internationally in terms of active accounts," Founder and CEO Anthony Wood mentioned on the Q2 earnings call. Roku will use the same strategic playbook that has worked so well domestically in other markets. The focus will remain on growing active accounts, driving higher engagement and streaming hours, and then monetizing via ads. Roku is also the No. 1 TV operating system in Canada and has strong momentum in the U.K., Germany, Brazil, and Mexico.

Just 12.8% of the $70.1 billion that was spent on TV advertising in the U.S. in 2020 was allocated to the connected-TV channel, in which Roku is included. Over the next several years, expect this share to grow significantly as the value proposition for marketers becomes strikingly clear.

And Roku's recent partnership with Shopify opens up the opportunity for millions of small businesses to start advertising on the streaming company's platform, further boosting Roku's prospects.

Since the end of July, Roku's stock price has fallen 33%. I think the market is generally worried about weakness for the overall streaming industry following a surge during the pandemic with people spending more time than ever inside. Consumers will certainly have more entertainment options at their disposal with loosened restrictions going forward.

With that being said, this is a great opportunity for investors who have been on the sidelines to begin buying shares in this winner. As I've laid out above, Roku possesses attributes that are working in its favor, including a powerful network effect and a still significant growth opportunity as streaming continues becoming more popular.

The stock market's recent pessimism on Roku's stock should be taken advantage of by smart investors. It could prove to be a lucrative decision for your portfolio over the next decade.