Please ensure Javascript is enabled for purposes of website accessibility
Free Article Join Over 1 Million Premium Members And Get More In-Depth Stock Guidance and Research
By Billy Duberstein - Oct 18, 2021 at 6:50AM

Alibaba has become the most fashionable way to play a China rebound. But its rival looks like a better buy.

The Chinese internet giants have been incredible wealth-creators over the past 20 years. Yet this summer, China's tech darlings fell hard -- as in more than 50% hard -- as the Communist Party's regulatory regime cracked down on the sector in a big way.

Now that these stocks are deeply discounted, some may view the sell-off as a golden buying opportunity. Count Warren Buffett's longtime business partner, Charlie Munger, as one of them, as Munger increased his massive bet on e-commerce leader Alibaba ( BABA 10.40% ) over the summer.

Alibaba has been a popular way for American investors to gain exposure to Chinese tech, but I'd argue Alibaba rival Tencent ( TCEHY 2.98% ) is actually the better way to play a Chinese rebound, for the following reasons. 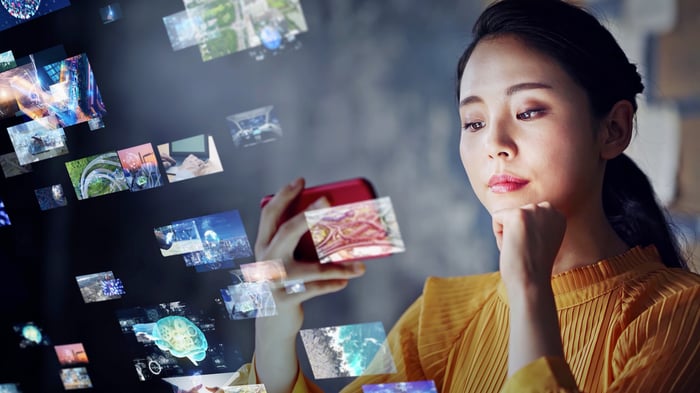 No. 1: Diversity of revenue and profit streams

In such an uncertain regulatory environment, a company's diversity and resilience is paramount. This is one of the fundamental reasons to like Tencent over Alibaba. The former has a fairly even distribution of revenue; last quarter, Tencent received 31% of revenue from video games, 30% of revenue from its fintech and cloud services segment, 21% from social networks services and subscriptions, and 17% from online advertising.

That's nice diversity, and while Tencent doesn't break down the profitability of each segment, global peers in video games, social media, and digital payments tend to be highly profitable. So while recent regulatory actions against video game addiction among youths rattled investors this summer, any one regulation is less likely to hurt Tencent's overall business when compared with Alibaba.

That's because Alibaba gets a much greater proportion of its overall revenue from e-commerce. Last quarter, 87% of Alibaba's revenue came from its e-commerce empire. Although there is a lot of diversity within that general e-commerce basket, the vast majority of Alibaba's business still comes from selling items to people over the internet.

The remaining 48% of Alibaba's e-commerce revenue is loss-making, generating an EBITA loss of 14 billion yuan for Alibaba last quarter. While it's true that these segments across direct sales, wholesale, grocery, international e-commerce, and logistics grew at a faster rate than core customer management, it's still unclear what kind of profit margins those segments will have at maturity. They'll probably be less profitable than the core online advertising business.

With a huge concentration in e-commerce, Alibaba's business is more vulnerable to any one particular regulation than Tencent might be amid this crackdown. In fact, recent new rules may already affect Alibaba's future results. In April, China's regulator fined Alibaba $2.8 billion for forcing vendors into exclusivity arrangements, and Alibaba will now stop the practice. That could leave it more vulnerable to competition, now that ascendant e-commerce players such as JD.com ( JD -3.54% ), Pinduoduo ( PDD 2.88% ), and Meituan ( MPNGF 4.75% ) will have access to the same vendors.

No. 2: Tencent has better non-China assets and investments

Aside from each company's core business, both companies also invest their profits into outside businesses, and both now have impressive investment portfolios. However, Tencent's is much larger, with stakes in significant non-Chinese companies such as Tesla, Snap, Activision Blizzard, and Universal Music Group. Tencent's most successful non-China investment is perhaps its roughly 25% stake in Sea Limited, which appears to be taking market share from Alibaba-owned Lazada in Southeast Asia -- though both Southeast Asian e-commerce companies are growing nicely.

In all, Tencent's investment portfolio totaled more than $224 billion as of June 30. While some of those investments in China, including JD.com, Pinduoduo, and Meituan (all backed by Tencent) and others are probably down since then, Tencent's international holdings have done much better.

By contrast, Alibaba's total investments were about $83 billion as of June 30, according to the company's balance sheet. That may be a bit low in reality, considering Alibaba owns 33% of Ant Financial, which many financial firms value in the $140 billion to $200 billion range after its scrapped IPO last year. So Alibaba's share in Ant alone could be between $45 billion and $65 billion.

Still, Alibaba's investment portfolio is much smaller than Tencent's and also offers less diversification outside China. In addition, Tencent has an unfair advantage over Alibaba in nurturing its investee companies. That's because Tencent is the owner of Chinese super-app WeChat, which logged just over 1.25 billion users as of last quarter. By being able to invest in companies and then promote them on WeChat, Tencent can give its investees instant exposure and an advantage that Alibaba might not be able to match.

No. 3: Better standing with regulators

Finally, another Tencent advantage goes back to the start of the regulatory campaign, which began when Alibaba founder Jack Ma criticized the country's primarily state-owned banking system for its lack of innovation.

We all know what happened next. Regulators scrapped Alibaba-owned Ant Financial's IPO, and it looks as though Chinese authorities will break Ant up into three parts, with state-backed companies also taking a stake in each.

In contrast, Tencent seems to have an excellent relationship with regulators, and CEO Pony Ma has a considerably lower public profile than Jack Ma does. While regulators also fined Tencent for some anticompetitive practices -- though mostly within investees such as Tencent Music ( TME 2.15% ), not its core business -- those fines were lower than Alibaba's, even though Tencent had a larger market cap.

Tencent has also traditionally taken a conservative route to monetizing its platforms, including WeChat and emerging products such as its new enterprise cloud software products. That's likely to keep regulators relatively at bay. Tencent also took the initiative to announce its own $15.5 billion social equity fund over the summer, only to have Alibaba announce its own $15.5 billion fund after the fact, a likely effort to do as well as Tencent in the eyes of regulators.

Since much of China's crackdown appears to be aimed at companies exploiting their monopoly power to earn higher-than-normal profits, Tencent's deliberate monetization approach and the relative modesty of its management team may keep it out of harm's way -- or at least more out of harm's way than Alibaba.

Amid high uncertainty, I'd rather pay up for business quality

Alibaba does have several things going for it that Tencent doesn't. For one, it's more accessible to foreign investors since it trades on the New York Stock Exchange. Tencent trades only in Hong Kong, although U.S. investors can also purchase American depositary receipts that trade over the counter in the United States.

Still, because Tencent's investment portfolio is so much larger than Alibaba's, the multiple on its core business is really cheaper than that. And since Tencent seems to have a more diversified business and a better investment track record, and since it appears to be a better corporate actor, it would be my preference for those looking to play a Chinese tech rebound.

You may notice in the disclosures that I own Alibaba shares but not Tencent. That's because I've chosen to own Tencent via its largest shareholder, which is also publicly traded and currently trades a significant discount to the value of its Tencent stake, and that holding is significantly bigger than my Alibaba allocation. However, those looking for more direct and "clean" exposure to Tencent would also be fine owning Tencent shares or ADRs outright.