This gene-therapy specialist may need some help turning things around.

What do AbbVie, Bristol Myers Squibb, and AstraZeneca all have in common? All three are among the largest pharma companies in the world. But all of these drugmakers have also closed high-profile acquisitions within the past two years. These deals helped them bolster their lineups and deepen their pipelines, among other benefits.

The acquiree can also benefit from the transaction, especially if it had fallen on hard times before being bought out. With that in mind, let's look at a biotech company that could become a buyout target within the next couple of years, Bluebird Bio (BLUE 3.92%). Below are two reasons why a larger drugmaker could be interested in buying this gene-editing specialist. 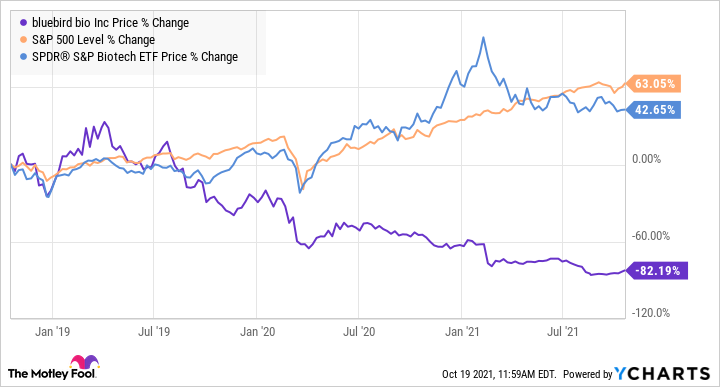 Over the past three years, Bluebird's shares have dropped by over 80%. That's an awful performance by any metric. Both the broader market and the biotech industry -- as measured by the SPDR S&P Biotech Index -- have performed substantially better. Bluebird's business has encountered a series of headwinds that have caused its stock to collapse. Here are some of those issues.

First, the company's Biologics License Application (BLA) in the U.S. for LentiGlobin as a potential treatment for transfusion-dependent beta-thalassemia (TDT, a rare blood-related disorder) was delayed. The company had initially planned to complete the BLA in the second half of 2020, but Bluebird was unable to provide some of the information requested by the U.S. Food and Drug Administration (FDA) as part of the application, which led to the delay. The company then said it expected the application to be complete in the second or third quarter of this year (between April 1 and Sept. 30), but that application still has not been submitted.

Second, back in January, the biotech temporarily halted a pair of clinical trials for LentiGlobin as a potential treatment for sickle cell disease (SCD). The company said a patient treated with the therapy more than five years ago was diagnosed with leukemia. Bluebird went on to investigate whether LentiGlobin caused this severe adverse reaction. Fortunately, it seems as though LentiGlobin wasn't to blame after all, and the FDA lifted its holds on LentiGlobin's clinical studies in June.

Third, Bluebird announced its exit from the European market in its latest quarterly update (in early August). The company's decision came after it was unable to negotiate lucrative deals with third-party payers in the old continent for a pair of approved gene therapies.

As a result of all these troubles, Bluebird's market cap of $1.39 billion is lower than those of most other gene-editing specialists on the market. That could attract a larger drugmaker looking to dip its toes in the space.

Bluebird has earned several regulatory approvals for its gene-editing therapies. In 2019, the company's Zynteglo got the green light in Europe as a treatment for TDT. Patients with this illness typically have no choice but to receive regular blood transfusions. Zynteglo was approved as a one-time curative treatment, which was clearly a significant breakthrough.

In March, the FDA approved Abecma, a treatment for multiple myeloma that Bluebird developed with Bristol Myers Squibb. Lastly, the biotech's Skysona earned approval in Europe back in July. Skysona is a treatment for a pediatric neurodegenerative disorder called cerebral adrenoleukodystrophy (CALD).

CALD only affects boys, and before Skysona, the only known treatment was a stem-cell transplant. While three regulatory approvals isn't a big deal for larger biotechs, for a company the size of Bluebird -- particularly one that focuses on gene editing -- this is a rare feat.

Since the company exited the European market, so it won't generate revenue from those approved products there. But these approvals show that Bluebird's platform carries serious potential, and that's one powerful reason why a larger company could pounce on the opportunity to acquire it. It's worth noting that Bluebird is currently planning to spin off its oncology business into a separate company called 2seventy bio. The separation should be completed by early November.

Bluebird will focus exclusively on its severe genetic-diseases business moving forward, but even within this smaller arena, the company still shows plenty of promise.

The market is not valuing Bluebird's programs very highly right now. Given its current market cap, the company could be an excellent target for bargain-hunting biotech investors who are willing to be patient. Of course, nobody knows what the future holds. I can't say for sure that Bluebird will become an acquisition target, but the move would certainly make sense for a company looking to get in on the gene-editing bandwagon.

It would also be good for Bluebird since it currently generates little by way of revenue. It won't record any sales from two of its three approved products (since they were approved in Europe and it decided to leave this market). Zynteglo earned the green light more than two years ago, and the company expected to already be recording sales from it. Developing gene-editing therapies isn't cheap either. If a larger company with the resources to bring Bluebird's products to the market swoops in, that will help Bluebird, too.

News of a pending acquisition at a premium would cause the company's stock to soar. Why would the biotech be acquired at a premium? Because that's typically the case for smaller biotechs that larger companies buy out. The company could also argue that some of its current programs could reach blockbuster status if approved in the U.S., justifying a premium-priced acquisition. In my view, there's an argument to be made for that, given that Bluebird is going after rare diseases with few treatment options, and considering it has already earned some regulatory nods.

I think this biotech stock is worth serious consideration -- regardless of whether it will be bought out soon -- especially at current levels.

Should You Buy the Dip With Bluebird Bio?
410%