After receiving yet another treatment approval from regulators, Bluebird Bio looks like a bargain.

Despite recently getting its third drug approved, Bluebird Bio (BLUE 11.56%) only has a $1.7 billion market cap. Will the company overcome its past pricing issues and fly to new highs? And could its lead in sickle cell disease clinical trials translate into massive gains for investors?

Bluebird Bio already had a multiple myeloma CAR T-cell therapy, Abecma, approved earlier this year, and now it has not one, but two gene therapy approvals for rare genetic diseases in the EU. On July 21, the rapidly maturing biotech received EU approval for its latest gene therapy, Skysona, for cerebral adrenoleukodystrophy (CALD). This rare pediatric neurodegenerative disease affects boys, with just over 1,000 patients having been diagnosed in the U.S., and just over 6,000 in Europe. Devastating and irreversible, it worsens over time, causing deterioration of nerve cells in the brain. Most patients die within two years of diagnosis.

Before Skysona was approved, the only option available to CALD patients was a stem cell transplant -- a treatment that is less likely to cause complications if the donor is a sibling. However, it is estimated that fewer than 20% of CALD patients have a matched sibling donor. 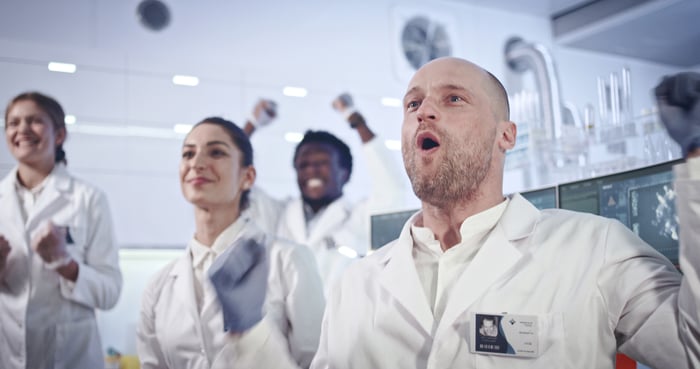 Skysona, a one-time gene therapy, has proven very effective against CALD -- 90% of patients who underwent the treatment were free from major functional disabilities at least 24 months afterward. But cost is liable to be an issue. Bluebird Bio priced its first gene therapy, Zynteglo (marketed for a different rare genetic disease, transfusion-dependent beta-thalassemia), at $1.8 million, so I expect it to price Skysona similarly. With approximately 6,000 CALD patients in Europe, that's an addressable market worth just over $10 billion.

Despite Zynteglo's great benefits for patients, Bluebird has had trouble reaching reimbursement agreements with payers for the treatment. The biotech even withdrew Zynteglo from the German market in April after it could not agree on a price with that nation's public health insurance system. There is also the question of who is diagnosing such a rare disease. In most EU countries, newborns are not screened for CALD, and in the U.S., only 20 states and the District of Columbia screen for it. Unfortunately, the lack of testing may be leaving a significant percentage of CALD patients undiagnosed.

All of this may at least be partially factoring into Wall Street's weak revenue forecasts for Skysona. One analyst at Jefferies projects peak annual sales of only $74 million for the CALD gene therapy.

While Skysona can be a life-extending therapy for CALD patients, as Zynteglo is for transfusion-dependent beta-thalassemia patients, these are incredibly rare diseases. Bluebird Bio's next target, sickle cell disease, is more common, affecting approximately 100,000 Americans and 1 out of every 365 African-American births, according to the Centers for Disease Control and Prevention. Given that its sickle cell disease treatment utilizes a lentivirus-based delivery system similar to the ones used by Zynteglo and Skysona, the company will have quite a bit of safety data to lean on when it goes to the FDA for approval of its sickle cell treatment. That's tentatively scheduled to happen in 2023.

While CRISPR-based treatments have generated a lot of hype, the sickle cell treatment utilizing CRISPR that is the most advanced in clinical trials is CTX001, which is being developed jointly by CRISPR Therapeutics (CRSP 0.29%) and Vertex (VRTX 0.19%). Thus far, they have only delivered data on seven CTX001 recipients in a phase 1/2 trial. By contrast, Bluebird Bio's sickle cell therapy has already moved into phase 3 trials after showing significant promise in its earlier-stage studies. So Bluebird Bio seems to have at least a two- to three-year lead on its CRISPR-based rivals in its efforts to get a therapy approved for this large potential market.

In a sense, Zynteglo and Skysona are warmups for Bluebird Bio as it prepares for all of the pricing issues and negotiations that will come with the massive addressable market that is sickle cell disease gene therapy. With approximately 100,000 people suffering from the disease in the U.S. alone, even at just 5% penetration, this could be a $10 billion a year opportunity. If it can approach that level of market penetration, Bluebird Bio could surge past its current market-cap peak to reach over $15 billion -- which would make it just under a 10-bagger from here. And that does not factor in the estimates for more than $1 billion in annual sales for Abecma by 2026.

Considering that Bluebird Bio currently has a market cap of $1.7 billion with just over $1 billion in cash on the books, there is a lot of potential upside here. Given its significant head start in the race to FDA approval for a sickle cell gene therapy, plus significant experience in the gene therapy field from its other endeavors, I'm rooting for this cutting-edge biotech to overcome its prior missteps and reward both patients and investors.