Don't dismiss the possibility that you can grow a million-dollar portfolio on an average income.

If you're lucky enough to be the beneficiary of a major inheritance or happen to earn a six-figure income, well done you! You're likely well on the road to retiring as a millionaire (if you're not one already).

If you're like the average American, though, you can't necessarily rely on an inheritance or a six-figure income to fund your retirement, and amassing a seven-figure retirement nest egg will rest squarely on your own shoulders. The latest public statistics put the average annual U.S. salary a bit above the rounded figure of $50,000 (it was $51,916 in 2019) and that may seem like it won't be enough to get you to that goal. Housing costs, taxes, and other monthly living expenses likely consume most of your wages. The expense of living would make it easy to not even bother trying. 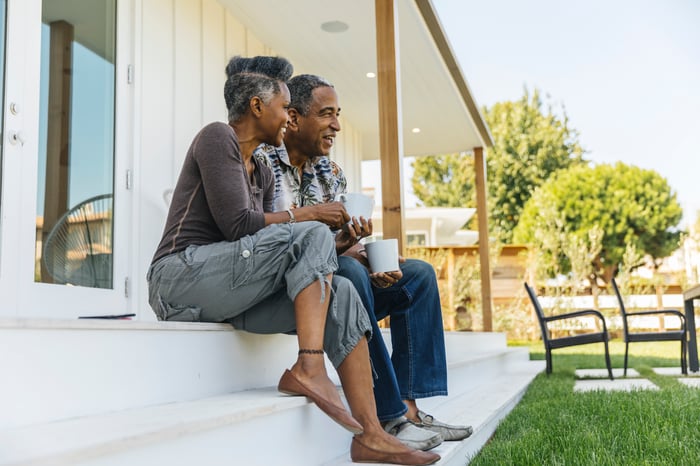 But don't dismiss the possibility of becoming a self-made millionaire. Enough time can turn even a little money into a lot of money if the process is handled smartly. And yes, that's how successful investors view their wealth-building. It's not a one-time event. It's a simple process repeated over and over again. The big challenge just lies in consistently contributing enough money for a long enough time to allow compounding interest to get the job done.

With that as the backdrop, here's a closer look at the three key components of the retirement saving process.

1. Invest in an index fund

Of all of these options though, the stock market is arguably the best balanced. It has a history of outpacing inflation, but it also just has a history. It remains to be seen if relatively new ideas like cryptocurrencies or non-fungible tokens have the sort of staying power and future liquidity eventual retirees need.

Better still, you don't even have to be a stock-picker to make the most out of the market's potential. You can simply buy into a fund based on the S&P 500 (^GSPC 0.25%) index, which is just a giant basket of stocks meant to mirror the broad market's overall value. It's easier and simpler than forever trying to figure out which individual stocks to own, or not own. The S&P 500 sports an average annual return of about 9% if you need a number -- which we do -- to base some calculations on. (It's actually done a little better than 9%, but it doesn't hurt to think conservatively.)

For most U.S. workers, there's not always a lot left at the end of the month once all the bills are paid. It doesn't take a whole lot, however, to get started making money in the stock market. Many brokerage firms have done away with account minimums, but most of the ones that haven't will let you get going for a nominal amount.

But how much is needed to start your journey down the path to $1 million? Surprisingly, $5,000 per year can get the job done when put to work investing in stocks.

That's $416 per month, or one-tenth of your income if you make $50,000 a year. Some car payments are higher than that, and depending on your lifestyle, there's a chance you're spending more than that just going out or splurging while shopping.

3. Invest at this rate for at least 35 years

Scraping together $5,000 per year is a stretch, but it's possible. How long will you have to earn a wage at a job to fund your nest egg's growth before you can start making withdrawals from that stash? The answer is 35 years. Earning an average of 9% per year on 35 consecutive years of $5,000 in new investment money will leave you with nearly $1.08 million at the end of that timeframe. 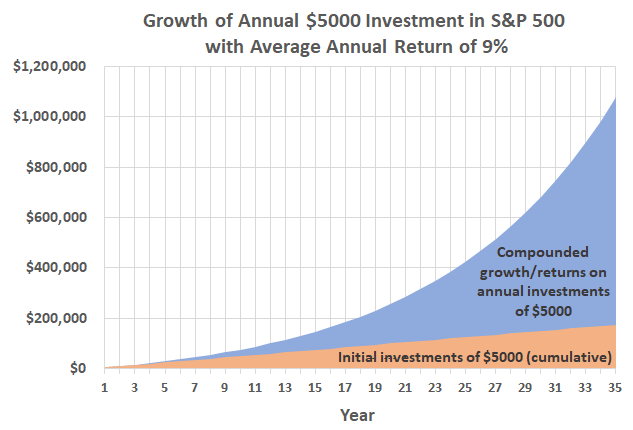 That seems like a lot of time, and at one point, it would have been. Not too long ago working for 30 years was considered a long time. Census Bureau data suggests that back in the '60s and '70s the average U.S. worker retired while they were in their mid-50s, although some men would work into their mid-60s. Now, pension and Social Security payments aren't even viable options until someone's in their mid-60s.

Just bear in mind that the average life expectancy in the United States has improved from around 70 years of age in 1960 to around 78 years now. We've got longer to do what's (usually) less physically taxing work.

There's more than one way to retire a millionaire on $50K

That's OK. If you can only spare $4,000 per year, it's going to take you 37 years to get to the $1 million market. That's still a palatable plan. At the other end of the spectrum, if you can pony up $6,000 per year you can reach the million-dollar threshold in around 32 years. People just starting out their adult lives may only be able to put away $3,000 per year now, but as loans get paid off and earnings improve, that figure can be ratcheted up to $6,000 per year (or more) later to make up for lower initial deposits. That's the path most investors take, and that option works too.

The bigger point of this exercise is just to illustrate that it doesn't take a lot of money to start building some serious wealth. It just takes some time and a commitment to making your annual contribution even when it's not easy to do so.