Shares of Ford Motor Company (NYSE:F) were moving higher on Wednesday morning, after a Wall Street analyst boosted his bank's rating on the stock in a bullish note.

As of 11 a.m. EDT today, Ford's shares were up about 4% from Tuesday's closing price.

In a new note on Wednesday morning, Credit Suisse Group analyst Dan Levy raised his bank's rating on Ford's stock to outperform, from neutral, and increased its price target to $20 from $15.

Levy wrote that in the last year he has seen a "significant turnaround" take place at Ford, and he thinks that auto investors are starting to take note. The company has moved on from what he characterized as a period of quarterly earnings disappointments, and has "sharply accelerated" its transition to electric vehicles.

Levy thinks "there is more opportunity ahead" for Ford and its shareholders. The automaker will not only benefit from its improving fundamentals, he wrote, but it's changing investors' perceptions around its long-term positioning in EVs and adjacent digital businesses. 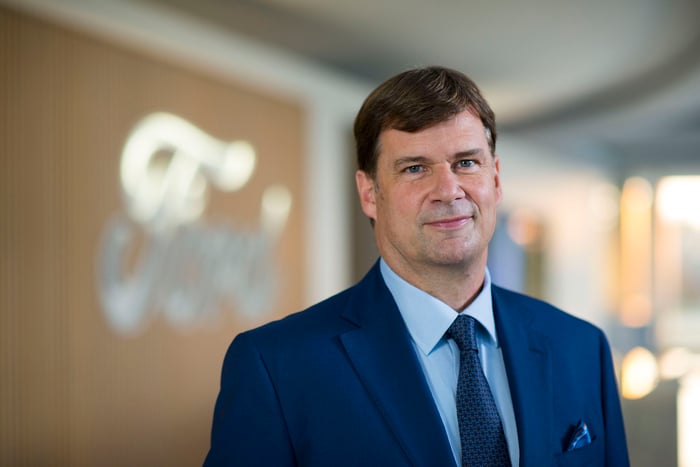 CEO Jim Farley, who took the helm at Ford on Oct. 1, 2020, moved quickly to put the company back on a positive growth path. Image source: Ford Motor Company.

Speaking as a longtime Ford shareholder, I think Levy is spot-on. CEO Jim Farley, who took the top job just over a year ago, has made a series of impressive moves that have collectively put Ford back on track to profitable growth.

Not only is the company moving more aggressively into EVs and related technologies, it's also doing a much better job of communicating its growth story to investors and the public. A big factor: Farley has elevated some of Ford's best communicators (including Kumar Galhotra, John Lawler, Lisa Drake, and Ted Cannis) to prominent executive roles.

There's no doubt that Ford still has work to do. But I agree with Levy: A significant turnaround is already visible, and there is indeed much more opportunity ahead for the company and its shareholders.