These stocks have characteristics that make it easier to ignore short-term volatility.

Becoming richer by investing in stocks can involve risk. After all, the market historically has a higher return than other assets. Volatility is the price you pay for that return. Although the daily ups and downs can cause some sleepless nights, over long periods of time they become meaningless.

That means a great way to mitigate the volatility is to invest in companies with advantages that make them likely to succeed over the long term. By thinking in decades, not weeks, market gyrations are easier to ignore. To that end, we asked three contributors to Fool.com for a stock with attributes that make it especially durable. They chose Vail Resorts (MTN 1.55%), Smith & Wesson Brands (SWBI 2.18%), and Airbnb (ABNB 4.77%). Here's why. 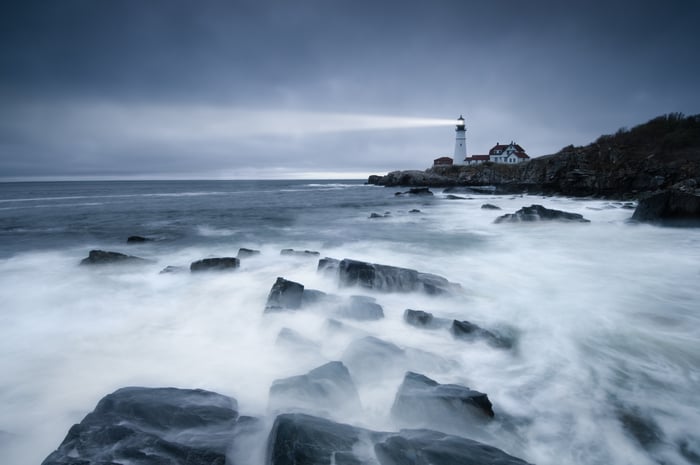 Jason Hawthorne (Vail Resorts): Warren Buffett is credited with popularizing the term "moat" as it relates to business. It refers to the advantages a business has -- specifically, advantages that are difficult for competitors to overcome. A wide moat can allow a company to maintain profits indefinitely as others struggle to catch up.

Vail Resorts has one of the strongest moats around. The company operates 37 world-class ski resorts. Most are in the U.S. and Canada; however, it also owns three of the five largest ski areas in Australia. The industry is surprisingly fragmented with 745 ski areas in North America. But Vail's leadership can be seen in the traffic its sites generate.

The difference comes from Vail's destination strategy. Beyond just skiing, its locations are dense with luxury accommodations, fine dining, and outdoor activities. And the industry is almost impervious to disruption. There have not been any new destination ski areas built in North America in the last 40 years according to management. Although the company doesn't own the mountains it develops, its agreements -- including with the U.S. Forest Service -- are renewable and have expiration dates from 2029 through near the end of the century.

The competitive position and excellent management has produced strong returns for shareholders. The total return -- price appreciation plus dividends -- is almost 920% over the last decade. You would think a global pandemic would have crushed the stock. Miraculously, shares are up 46% from where they sat at the beginning of 2020.

Now, longtime CEO Rob Katz is stepping out of the top job and moving to the board of directors. The company's chief marketing officer, Kirsten Lynch, will take his place. Lynch has overseen a transformation in how the company uses data to personalize marketing, develop products that generate higher loyalty, and invest in areas that will drive growth. Vail has combined that data with its network of resorts to create a subscription program -- its Epic passes and rewards -- that drive additional usage and spending much like Amazon's Prime service.

Data has been the key to Vail Resort's performance over the last decade and its competitive advantage is one of the most enduring on earth. A new CEO can often give investors pause, but Lynch is a choice that should allow Vail to continue distancing itself from the competition. If you have a multi-year investment horizon, the company appears positioned to navigate any moguls in its path.

A great equalizer for your portfolio, too

Rich Duprey (Smith & Wesson Brands): Sin stocks tend to make for good investments because of their durable nature in all kinds of markets. They can weather the storms -- in fact do quite well in them -- as well as thrive when the skies clear.

Smith & Wesson Brands'  firearms industry might be somewhat more volatile than, say, cigarettes or alcohol, but there remains a largely inexorable movement toward ever greater sales in most any condition. Today, it has significant tailwinds behind it, even if it doesn't necessarily look that way. Its depressed stock provides a perfect opportunity for investors to realize substantial rewards for taking on that risk.

FBI criminal background checks on potential gun buyers are running behind last year's mammoth gains, suggesting the industry's momentum is ebbing. However, 2020 was the all-time record for gun sales by far so surmounting that level would be difficult. This year's background checks are actually well ahead of 2019's number and are even above those conducted in 2016, the previous record year. So people are still buying quite a lot of guns and that's borne out by Smith & Wesson's results.

A contentious presidential election last year, along with riots, civil unrest, and calls to defund law enforcement led some 8.3 million individuals to purchase their first firearm last year. Although many of those issues have faded from the headlines, and many cities that cut police budgets have since restored them as crime shot higher, the National Shooting Sports Foundation says another 3.2 million people bought their first gun over the first six months of 2021.

Like many businesses, the pandemic forced Smith & Wesson to adapt its business to new conditions and CEO Mark Smith says the gunmaker is positioned to handle whatever the economy throws at it, and do so profitably.

Smith & Wesson has no long-term debt, over $171 million in cash, and began paying its first dividend last year, which currently yields a modest 1.5% annually.

At just four times trailing earnings and seven times next year's estimates, Smith & Wesson also trades at a fraction of its sales and earnings growth estimates, and goes for a deeply discounted three times the free cash flow it produces. While the gunslinger rarely trades at a premium to any of these ratios, it's a stock that is cheap by virtually every measure with a long runway for further growth in front of it.

This travel leader could take you to the next level

Keith Noonan (Airbnb): While valuations for many growth-dependent stocks have recently been under pressure, Airbnb has proven impressively sturdy. The company's share price has climbed roughly 27% over the last three months, and the travel and rental specialist now has a market capitalization of roughly $108 billion.

With that kind of valuation and shares trading at approximately 18.5 times this year's expected sales,  more risk-averse investors may raise some reasonable concerns about whether the stock really has what it takes to deliver big wins for shareholders. While the potential for near-term market volatility is something that should be taken into account, I think this is one of those cases where good things will ultimately come to those who buy and wait for big payoffs down the line.

True enough, Airbnb is already a big name with a valuation to match. However, it's also a category-leading business that has the potential to make patient shareholders rich. Consider that just $1,000 invested in tech leader Microsoft a decade ago would now be worth roughly $14,000 based on the company's dividend-adjusted total return across the stretch.  I'm certainly a fan of looking for small-cap companies that have the potential to deliver explosive returns down the stretch, but backing established businesses with sustainable competitive advantages is less risky and can also be a path to incredible wealth.

Airbnb's position in the short-term vacation-rental space is so strong that the company's name is virtually synonymous with the category. Over 4 million hosts have opened their doors to guests using the platform, more than 1 billion guest visits have already been completed, and the company is likely just starting to benefit as work-from-anywhere trends reshape how people live. The company is also making a big push into the local experience booking services space -- allowing users to book living accommodations and local event tickets through the same platform and save money in the process.

For long-term investors seeking explosive growth plays that can generate life-changing wealth, I think Airbnb stock currently offers one of the best risk-reward dynamics on the market.

Where Will Airbnb Stock Be in 3 Years?

2 Stocks Down More Than 45% to Buy Right Now

Down 53%, This Nasdaq Stock Has Never Been a Better Buy