The two organizations are not happy with each other at the moment.

Some big rumblings have been circulating in the sports video game world, with publisher Electronic Arts (EA -0.24%) and the international governing body of soccer, FIFA, butting heads publicly over the upcoming renewal of their licensing deal.

EA publishes the FIFA Soccer video game every year, one of the most popular games in the world and EA's biggest franchise. However, in order to call the franchise by its current name, EA has to license the name from FIFA, which it pays a hefty price for every year. With the license coming up for renewal after the Qatar World Cup next year, reports have come out that the two organizations are at an impasse, and that the exclusive naming license is likely not going to be renewed.

Here's what currently is going on in the dispute between EA and FIFA, and what it could mean for EA stock if it loses this license. 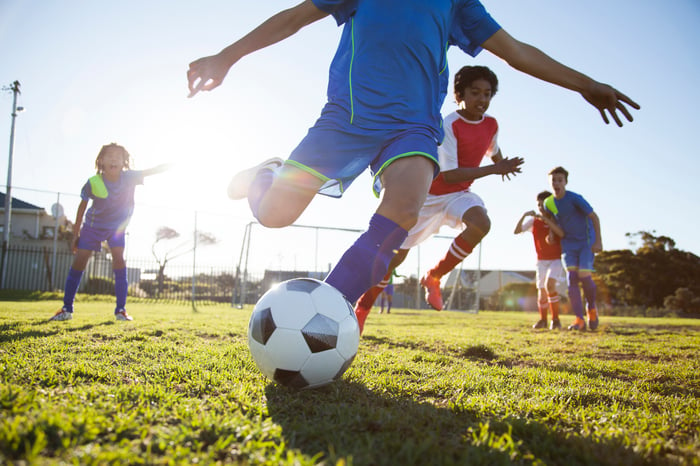 FIFA is not happy with EA at the moment

This news story started with a press release on Oct. 7 from EA that updated its investors about the launch of FIFA 22, which was released on Oct. 1. The game has been record-breaking so far, with 9.1 million players joining the game and 460 million matches played. At the end of the press release, the company included a peculiar section on name rights. Here is the exact statement:

As we look ahead, we're also exploring the idea of renaming our global EA SPORTS football games. This means we're reviewing our naming rights agreement with FIFA, which is separate from all our other official partnerships and licenses across the football world.

This was a bit ambiguous but was cleared up by other news reports on the negotiations. FIFA put out a press release with more specific language, stating that "The future of gaming and eSports for football stakeholders must involve more than one party controlling and exploiting all rights." The only company this could be referring to is EA and gives a hint that FIFA is not happy with the company right now.

It was unclear exactly what the two organizations were upset about, but then a New York Times article was released outlining why the talks have stalled. According to the report, FIFA is asking for a huge increase in licensing fees to $1 billion in every four-year World Cup cycle. It is also limiting what EA can do with the exclusive license. EA wants to put highlights of real soccer games into the video game and explore digital products like NFTs, which it apparently is unable to do right now.

How it could impact Electronic Arts

With the FIFA license only covering the naming rights for the video game franchise, EA likely thought $250 million a year was a bit egregious for FIFA to ask for, and that is why it is walking away from this relationship. It still owns the majority of soccer licenses around the world, with over 300 licenses giving access to 700 teams, 100 stadiums, and 30 leagues for its games, so it is not like the game will be losing the rights to top stars like Lionel Messi and Cristiano Ronaldo.

What's more, EA already filed a trademark for a new franchise name called EA Sports FC, indicating the company has decided to move on from FIFA.

How could this impact Electronic Arts? Honestly, it could be a positive for the business. It will lose one of its largest annual expenses and will now be able to explore different monetization strategies with more freedom. Yes, the FIFA Soccer brand is well known around the world, so there's some risk of losing brand quality with consumers if the FIFA name gets attached to other franchises. However, with most of the leagues/players still in a relationship with EA, and its only sizable competitor eFootball 22 getting horrendous reviews, it is tough to imagine players switching over just because the franchise is now called EA Sports FC.

EA's soccer franchise is its most important asset. The company doesn't specifically close how much the franchise brings in each year, but its Ultimate Team feature, which is a part of most of its sports games, was 29% of the company's overall revenue in fiscal year 2021, the majority of which is attributed to FIFA Ultimate Team. If EA ends its relationship with FIFA, it will be important for investors to track if this affects sales of its soccer games, which could have an impact on the stock over the long term.