Stocks were mixed on Wall Street on Friday morning, as different parts of the market had disparate performances. Weakness in the Nasdaq Composite (^IXIC -1.59%) showed the less-upbeat sentiment toward growth-oriented stocks that's prevailing right now, as the index was down half a percent as of 11 a.m. EDT, even as other benchmarks were gaining ground.

Nevertheless, there were a couple of noteworthy Nasdaq stocks that had much better performance than the overall index. Earnings helped push shares of Seagate Technology (STX -2.04%) and SVB Financial (SIVB -3.08%) higher, and their influence could be a long-term positive for the market, as a whole. Read on for the details.

Seagate heads into the cloud

Shares of Seagate Technology were up more than 5% on Friday morning. The maker of storage devices has benefited from favorable trends driving more big companies to beef up their data centers to take advantage of cloud-computing's efficiency gains. 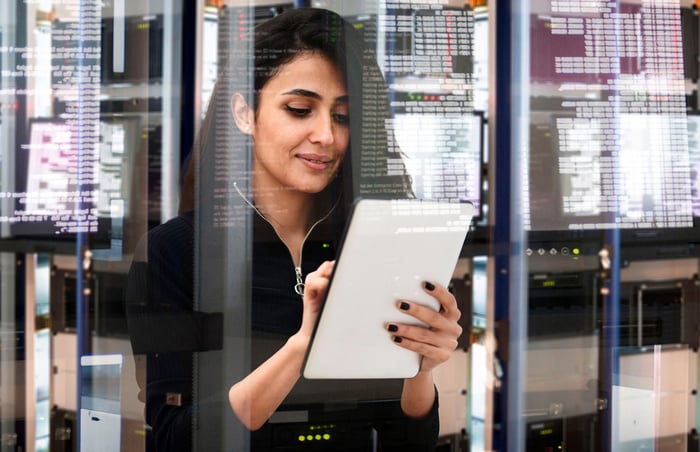 The numbers from Seagate's fiscal first-quarter financials were impressive. Revenue of $3.12 billion was up 35% from year-ago levels. Adjusted net income more than doubled year over year to $544 million, and the resulting adjusted earnings of $2.35 per share came in higher than many of those following the stock had expected.

Seagate attributed the gains to ongoing demand from its cloud data center customers, as well as strength in the video and image applications markets. With demand for mass-capacity storage seeing long-term trends higher, the company expects these gains to continue. Seagate predicted revenue of around $3.1 billion for the fiscal second quarter, as well, with adjusted earnings consistent with the $2.35 per share from the most recent quarter.

Seagate's stock has flattened out after extraordinary gains early in 2021. Shareholders are now optimistic, however, that Seagate might finally be ready to push higher in a favorable industry environment.

Shares of SVB Financial were higher by 6% on Friday morning, pushing the stock to a new all-time high. The parent company of Silicon Valley Bank reported strong results that point to its continued success in tapping into a key niche market.

Nearly all of SVB's key metrics were favorable. Earnings of $6.24 per share were down from year-ago levels, but they also included some key extraordinary items from the company's merger with Boston Private. Loans at the end of the quarter rose 21% year over year by $61.5 billion, while total client funds were up 13% to $371.4 billion.

Net interest income rose 17% from year-ago levels, while provisions for credit losses were down 20% to just $21 million for the period. Core fee income was higher by 19%, as well, helping to supplement other sources of revenue.

SVB continued to take advantage of strong conditions in the private-equity and venture-capital markets. That plays a key role in Silicon Valley and, in turn, helps boost the number of clients using SVB and the amount of funds they keep on deposit there.

Bank investors will look at SVB and see a valuation that's quite a bit higher than the typical bank. Yet with so many growth opportunities and expectations for further expansion, SVB isn't a typical bank -- and it looks like a legitimate growth stock for the long term.