Creators and their art are the DNA of Unity Software -- making its range of potential outcomes hard to comprehend.

Optionality is defined as "the quality of being available to be chosen but not obligatory." When applied to stocks, optionality represents the possible avenues in a company's long-term growth story. One great skill for a company to have is the ability to adapt to new potential growth options.

These adaptations often start as simple, novel ideas, kindled by deep creativity and imagination. Finding companies that foster an environment of this creativity is not necessarily uncommon, but finding a company that thrives almost entirely off of it is unique.

This is what sets Unity Software (U 6.20%) apart, along with its vision to enable creator success. 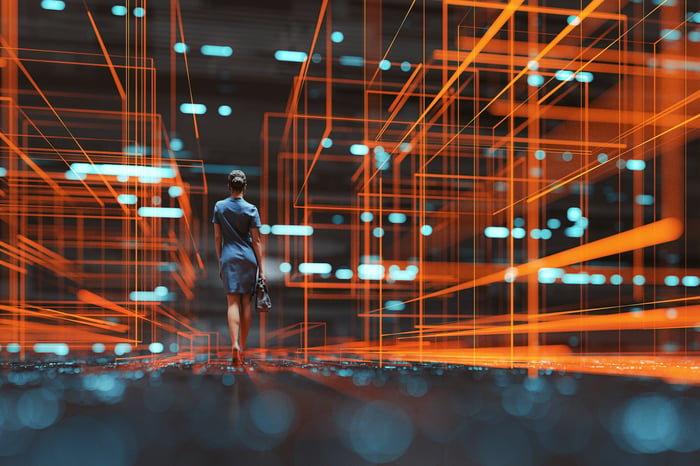 Intent on becoming the leader in interactive, real-time 3D content, Unity offers two sets of solutions to its customers: Create and Operate. Create Solutions is a platform-agnostic playground for creators to develop, edit, and run 2D and 3D environments in real time. This solution brings creators of all types onto Unity's platform via a monthly subscription acting as a toolkit for developers, artists, engineers, and more.

Meanwhile, Operate Solutions looks for creative ways for customers to monetize their content, often by growing and engaging with their user bases. Sales in this solution come from revenue sharing and usage-based fees, which allow Unity to grow alongside its customer base.

Unity's nearly universal reach can be seen in the gaming industry, with 71% of the top 1,000 mobile games created using the company's platform and solutions. Despite this large market share, CEO John Riccitiello believes the company can still increase its gaming penetration by a magnitude of five times.

Speaking to the ongoing opportunity for Unity and its creators, Riccitiello had this to say during the Q2 earnings call:

As gaming devices become more powerful, more powerful GPUs, more memory, 5G networks, developers compete by making bigger, richer, more art-filled games. The war among developers and publisher to win with consumers is over the best content. And in this war, the ammunition is art.

All in all, Unity's software incubates best-in-class content from its 1.4 million monthly active creators, placing it, and its solutions, at the bleeding edge of creativity.

Furthermore, Riccitiello announced during the recent earnings call that Unity has added three new customers in the aerospace and defense manufacturing industries. Touching on Unity's opportunity to expand to new sectors, CFO Luis Visoso stated: "Unity's customer base is becoming more diverse as we expand from games into other verticals at a fast pace. We expect to continue to see good progress in bringing real-time 3D to new industries."

Perhaps the most significant growth opportunity for Unity can be seen in its recent acquisition of Parsec, a remote desktop company that allows employees to work together, regardless of their location. Parsec's net dollar expansion rate of 200% highlights just how valuable its services are to its customers by providing simplicity and access to a wildly complicated and immersive process in working collaboratively.

This acquisition's abilities could theoretically be applied to almost any industry, making Unity's creative mindset a genuinely unique weapon for investors looking out over the next few decades.

Optionality limited only by imagination

Ultimately, a company's potential for growth optionality lies within its creative ability and foresight to identify future paths for its business. Due to Unity's direct focus on creativity, both in the services it provides and the products developed by its creators, it seems like a wise bet to back this imaginative stock.

Looking ahead to the company's upcoming third-quarter earnings on Nov. 9, I will be watching to see what different industries Unity expands into, whether new or adjacent. Overall, Unity's optionality is hard to comprehend fully, and that is precisely why the stock looks poised to trounce the market over the next decade and beyond.