Investing in today's innovative businesses is a good way to make money down the road.

As an investor, knowledge of the past can help you understand the future. That may sound counterintuitive, but history tends to repeat itself in subtle ways. For instance, innovative technologies have changed the world on dozens of different occasions, acting as catalysts for productivity and economic growth.

In the last century alone, personal computers, the internet, and mobile devices have been inflection points that completely changed the way we live. Looking forward, I think several burgeoning technologies have the same potential, but none more so than artificial intelligence (AI). In fact, research from McKinsey & Co. suggests that AI could boost economic output by $13 trillion by 2030.

Building on that idea, let's look at two companies that are shaping the future of autonomous technology. 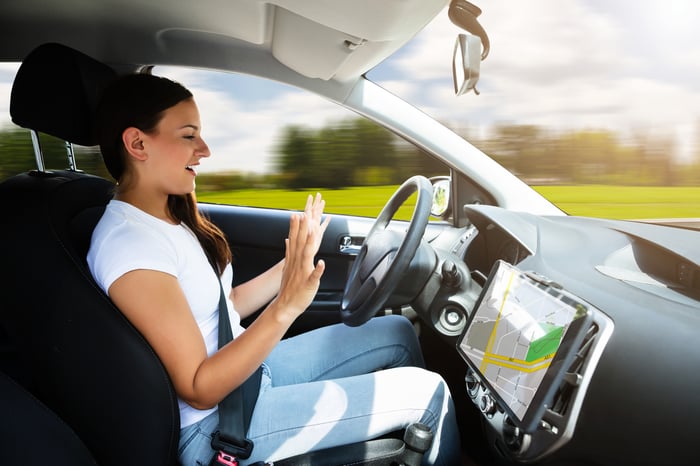 Nvidia (NVDA 1.96%) is a chipmaker that specializes in accelerated computing. Its core product is the graphics processing unit (GPU), a chip that can perform thousands of calculations simultaneously. When Nvidia invented the GPU in 1999, it revolutionized the gaming industry with ultra-realistic computer graphics. But GPUs have since become a gold standard in the data center, where they are used to accelerate intensive workloads like scientific computing, data analytics, and artificial intelligence.

In fact, Nvidia holds over 90% market share in the supercomputer accelerator industry, and it has consistently set records at the MLPerf benchmarks, a standardized testing event that compares the performance of AI technologies. Most recently, Nvidia set records in the inference trials in September, the part of AI where computers are used to make decisions and predictions.

Beyond industry-leading performance, Nvidia also benefits from a broad portfolio of products. It acquired Mellanox in 2020, adding high-performance networking to its repertoire. The company has diversified into software over time, and it now provides a range of frameworks that help developers build AI applications, such as Merlin for recommender systems, Metropolis for smart cities, and Isaac for autonomous machines.

Not surprisingly, Nvidia has seen strong demand in both its gaming and data center businesses, and that has translated into a strong financial performance over the past three years.

Looking ahead, Nvidia is well positioned to grow its business. Management puts its data center market opportunity at $100 billion by 2024. Moreover, technologies like self-driving cars, smart cities, and autonomous robots will only become more common in the future, and Nvidia's platform brings those technologies to life.

Tesla (TSLA 3.94%) is undoubtedly one of the most controversial stocks on the market, but it's also one of the most innovative companies on the planet. In 2008, Tesla produced its first electric vehicle (EV), while the prestigious automakers of Germany laughed at the idea. As it turns out, Tesla saw the writing on the wall before the rest of the industry.

Since then, Tesla has parlayed its first-mover status into a more substantial competitive advantage. In 2017, it launched the 2170 battery cell, the cheapest and most energy-dense cell on the planet, according to CEO Elon Musk.

Why does that matter? Tesla pays far less to build battery packs (the most expensive part of an EV) than other automakers. And the energy density of 2170 cells means that Tesla's four different vehicles -- the Models S, X, Y, and 3 -- are the top four EVs in terms of range.

Not surprisingly, strong demand has helped Tesla maintain its leadership position. Through the first half of 2021, the company captured 15.2% market share, selling 386,100 vehicles. In turn, Tesla has posted impressive financial results over the last two years.

However, I think Tesla's best days lie ahead. With over 1 million autopilot-enabled vehicles on the road, the company had collected over 3 billion miles of real-world driving data by February 2020, far more than any other automaker. Some estimates even put that figure well over 5 billion miles today.

Then, a few months ago, management debuted the D1 chip, the custom-build semiconductor that will power Tesla's Dojo supercomputer. The D1 chip is custom built for AI, and it will make Dojo the most powerful AI training machine in the world. In summary, Tesla has more data and better technology than its peers.

To that end, Musk said: "About three years from now, we're confident we can make a very compelling $25,000 electric vehicle that's also fully autonomous." He made that statement roughly a year ago, and if taken at face value, Tesla is much closer to producing an autonomous car than any other automaker.

Finally, Tesla recently launched a car insurance product in Texas, where it will rely on its AI-powered "safety score" to determine premium prices. Here again, the company's fleet of connected cars and its prowess in the field of AI have opened a new market opportunity. That's why this company is shaping the future of technology.