These stocks may be down, but they still have very bright futures.

Many of the biggest renewable energy stocks on the market have pulled back sharply since hitting highs earlier this year. That's partly because investors had become too exuberant in trading and partly because higher interest rates have hurt growth stocks.

Despite the pullback, renewable energy is a booming industry and there's a lot of opportunity for investors. Three of our renewable energy contributors think SunPower (SPWR -4.97%), Atlantica Sustainable Infrastructure (AY -0.63%), and TPI Composites (TPIC -1.52%) are great deals, with the stocks down over 25% from their 52-week highs. 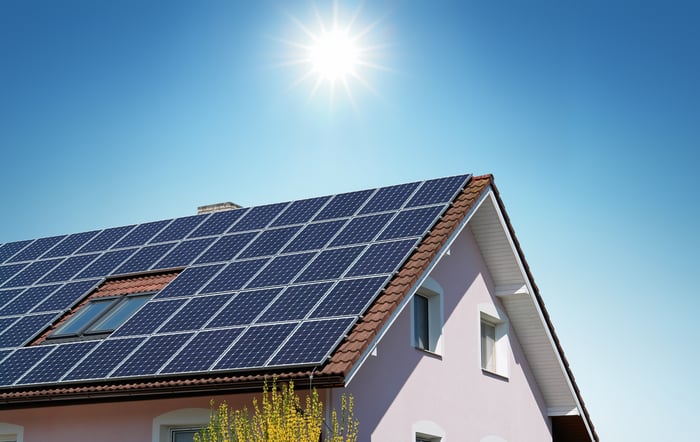 Travis Hoium (SunPower): SunPower has gone through tremendous changes this year. The company recently announced plans to exit the commercial solar business, after exiting the utility-scale solar market and the solar manufacturing business over the last few years. SunPower also recently announced the acquisition of a residential solar installer Blue Raven Solar, meaning the company now installs solar systems itself rather than working with third-party partners to do the work. But this may be the right move long-term.

SunPower has built the digital infrastructure and brand to be a top residential solar company. On the company's website you can build and price a solar installation in just a few minutes and the company has put together the infrastructure to control and monitor solar and energy storage installations.

Strategically, SunPower is well positioned to succeed in residential solar and currently has the No. 2 market position behind Sunrun (RUN -4.54%). And the stock is trading at a discount to Sunrun. In the first half of 2021, SunPower installed 204 megawatts of residential and light commercial solar, before the acquisition of Blue Raven Solar, and Sunrun installed 353 MW of solar. But SunPower's market cap of $5.1 billion is less than half of Sunrun's at $10.6 billion, so even from a valuation perspective SunPower's shares look like a value.

Long-term, I think residential solar will continue to grow in the U.S. and SunPower clearly has a market-leading position. The stock may be down from highs earlier this year, but that's created a discount for investors who believe in this industry long-term.

High-quality assets at a discounted price 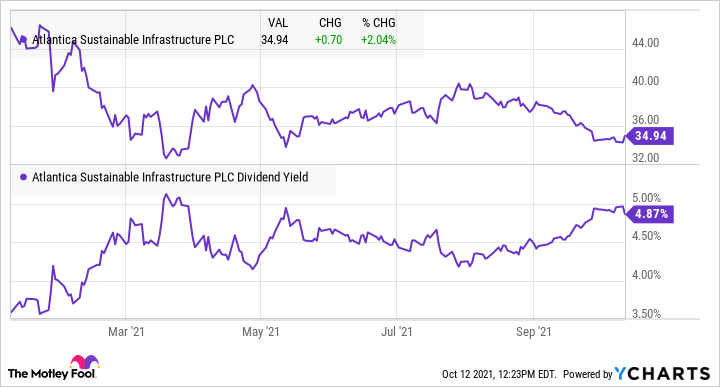 With shares also yielding nearly 5%, now is a good time for investors to get this income-generating investment with room for capital appreciation.

Most of Atlantica's power generation comes from its renewable assets -- more than 70% of which are solar. The company also holds assets in efficient natural gas, electric transmission lines, and water capacity. The company's model is to grow by adding new assets with contracted or regulated revenue, helping to ensure a steady flow of income for investors.

Shareholders can count on that income because Atlantica's portfolio of 34 power generating assets are 100% contracted, or in two cases, regulated. And there's good reason to believe invested capital can also grow, as the company continues to grow its generating assets.

In the first half of 2021, Atlantica grew its megawatts in operation from its renewables segment by 30% compared to that period in 2020. For its efficient natural gas holdings, that growth rate was 16%. That, along with variations in working capital levels, helped operating cash flow soar 66%.

A mid-cap wind stock that's down but not out

Daniel Foelber (TPI Composites): TPI Composites has spent the last few years shifting from a small and profitable wind blade manufacturer to a global producer with a much higher manufacturing capacity. Investors cheered the strategy, hoping that TPI's investments would pay off as renewable capacity expansions reach the next inflection point. But after reaching an all-time high in February, shares of TPI have plummeted around 60% from that high, are down over 35% year to date, and are now within striking distance of a 52-week low.

Without getting into too much detail, TPI's problems stem from its need to book long-term supply agreements on its new production lines, renew contracts that will expire in the next few years or find fresh buyers, and pay down debt that it's taken on to fund its growth. In its Q2 2021 conference call, TPI mentioned that it has contracts set to expire on Dec. 31, positioning the company to have fewer than 54 dedicated manufacturing lines under contract.

TPI has struggled to grow its top line at a rate that justifies its valuation. After initially forecasting a profitable 2021, updated guidance suggests TPI will likely record yet another loss this year. To make matters worse, TPI now expects the wind market will be "relatively flat" in 2022, pointing to a longer than expected period of slow growth and uncertain profitability.

Companies aren't perfect. And in today's age of supply chain constraints and multi-year renewable energy development projects, it can be easy to make inaccurate predictions. TPI's forecasts have been wrong, and the company's lackluster growth has resulted in disappointing medium-term performance. The silver lining is that TPI has effectively lowered expectations by so much that virtually any news will look good.

Favorable contracts, higher than expected utilization rates from its production lines, and any improvement to growth will indicate TPI is making progress on its turnaround. Given its presence in Europe, North America, Asia, Central America, and the Middle East, along with reliable business from some of the most reputable original equipment manufacturers in the industry (like Vestas, GE, and Siemens Gamesa to name a few), TPI is a wind energy stock worth considering at these lower prices.

Pullbacks can be healthy for the stock market and in the case of SunPower, Atlantica Sustainable Infrastructure, and TPI Composites this provides a great buying opportunity for investors. These companies still have a lot of growth ahead as renewable energy grows, and investors are getting a better price for these businesses than they were a few months ago.