The results from phase 3 clinical trials suggest that Rinvoq could be an effective treatment for patients.

Earlier this month, AbbVie (ABBV -1.20%) announced promising top-line results from a phase 3 study examining the efficacy and safety of Rinvoq in treating patients diagnosed with active ankylosing spondylitis. But what impact could these clinical results have on pharma stock AbbVie in the years ahead?

Let's dive into the data studying Rinvoq's effect on patients with ankylosing spondylitis, as well as Rinvoq's U.S. sales potential to address this question. 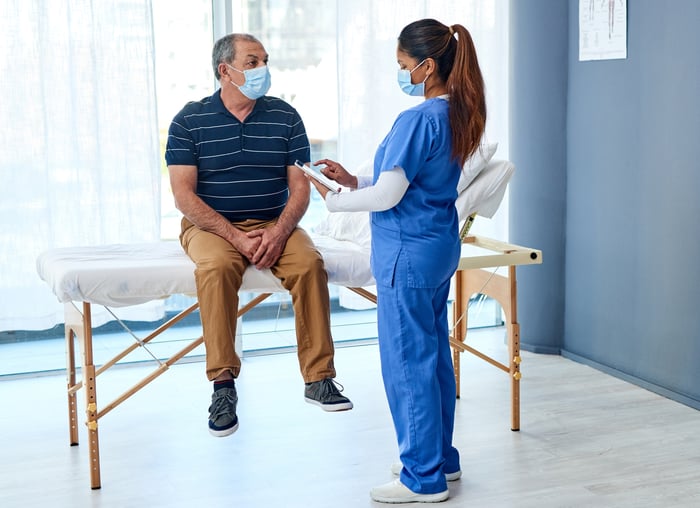 Ankylosing spondylitis is a "rare type of arthritis that causes pain and stiffness in your spine," according to WebMD. Ankylosis refers to the fusion of bones or hard tissue, whereas spondylitis means inflammation in your vertebrae. While it often starts in the lower back, it can spread to the neck and damage other joints in the body as well.

Since ankylosing spondylitis can result in significant pain and mobility limitations, it is important for patients with the disease to develop and modify their treatment plan with the consultation of a medical professional. One biologic drug that could soon be a tool for doctors to treat refractory and severe cases of ankylosing spondylitis is Rinvoq, which was demonstrated to be beneficial in controlling it.

AbbVie enrolled 420 adult patients with ankylosing spondylitis who previously failed at least one biologic disease-modifying antirheumatic drug (bDMARD) into its phase 3 clinical trial to test the efficacy and safety of Rinvoq. The drug significantly reduced the symptoms of ankylosing spondylitis, which was demonstrated by the proportion of patients achieving an Assessment in SpondyloArthritis International Society (ASAS) 40 response.

An ASAS40 response means that a patient has experienced at least a 40% improvement in their ankylosing spondylitis. This includes patient measures, such as the severity of back pain and the duration of morning stiffness, as well as laboratory measures of inflammation levels. The higher the ASAS number, the more impactful a therapy was for a patient.

A large market with a need for more options

Based on this data, there are approximately 49,000 ankylosing spondylitis patients who have failed their first treatment and who could need another treatment. Since I believe that Rinvoq's efficacy makes up for the potential safety concerns associated with the JAK inhibitor drug class, the drug can reasonably capture 15%, or around 7,300, of these patients.

Rinvoq's annual list price for its rheumatoid arthritis indication in the U.S. is around $60,000. But since the Institute for Clinical and Economic Review (ICER) believes that a value-based price for the drug would be $45,000 annually, that likely is a more appropriate figure for list price. Conservatively accounting for insurance adjustments, the company probably would receive $40,000.

Factoring in 7,300 patients taking Rinvoq for ankylosing spondylitis in the U.S. at a net annual price of $40,000, the indication in the U.S. could realistically haul in nearly $300 million in annual revenue for AbbVie. This would be a nice revenue addition for AbbVie, which analysts already expect will generate $56.3 billion in revenue this year.

AbbVie is a soon-to-be Dividend King

By way of its roots dating back to when it was part of Abbott Laboratories, AbbVie is set to become a Dividend King. Its next dividend increase should be announced in the near future. This is despite the fact that AbbVie was spun off from Abbott Labs in 2013. But to its credit, AbbVie has raised its dividend each year since the spin-off.

AbbVie's dividend payout ratio is set to be in the low-40% range for this year, which is the reason for my confidence that AbbVie will soon raise its dividend and become a member of the highly respected Dividend Kings. And trading at less than nine times this year's non-GAAP earnings per share (EPS) forecast, AbbVie offers a market-crushing 4.8% dividend yield at an attractive price to income investors. With an already strong yield, the addition of this Rinvoq indication in the U.S. would provide more cushion for the company.