Tesla (NASDAQ:TSLA) stock undoubtedly commands a premium valuation. Its market cap currently sits at $911 billion, which puts the company's valuation higher than the combined valuation of the next eight largest automakers. Whether that valuation is fairly earned or not, it's hard to deny that investors feel Tesla's business is firing on all cylinders.

Last week, the electric vehicle maker reported impressive third-quarter results: Revenue soared 58% year over year to $12.1 billion, operating cash flow jumped 31% to $3.1 billion, and net income came in at $1.6 billion, marking Tesla's ninth consecutive quarter of GAAP profitability. This performance is made all the more impressive because Tesla is dealing with broader market supply chain chaos and semiconductor shortages. The report also showcases the competitive strengths that differentiate Tesla from its rivals. Let's delve into this further. 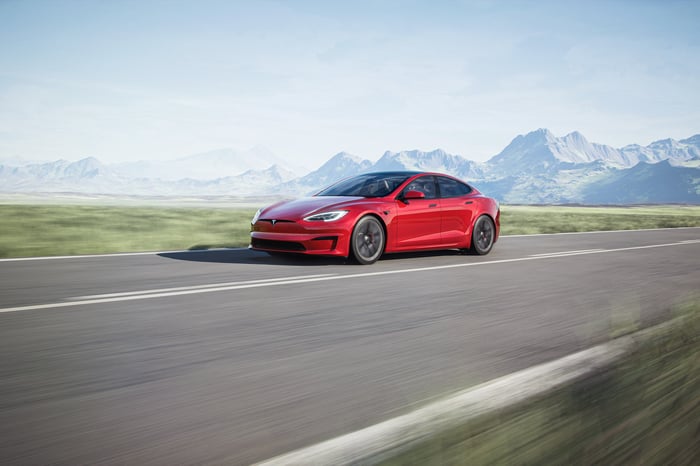 During the third quarter, Tesla factories produced a record 237,823 cars (up 64% year over year) and delivered 241,300 cars (up 73%) to customers, all despite significant supply chain headwinds. By comparison, General Motors said its third-quarter sales fell 33% year over year, and management placed the blame squarely on the chip shortage. Similarly, Stellantis and Ford reported declines in sales of 19% and 27%, respectively, with both companies pointing a finger at supply chain headwinds.

ARK Invest fund manager and longtime Tesla bull Cathie Wood was quick to highlight the irony in this situation. In a recent tweet, Wood noted that electric vehicles require three to five times more chips per car, meaning Tesla should have been hit much harder by the current semiconductor shortage. So why was Tesla able to produce and deliver a record number of vehicles?

In the previous quarter, CEO Elon Musk mentioned that chips were the slowest part of the company's supply chain. So it's not like Tesla was somehow immune to the semiconductor situation. Instead, the company substituted alternative chips, rewrote the firmware, and integrated them into vehicles to maintain production levels. This highlights one of Tesla's greatest advantages: It's just as much a software company as it is an electric vehicle (EV) manufacturer, and Tesla's software engineers are very good at what they do. That allowed the company to pivot quickly and deliver impressive results, despite difficult macroeconomic conditions.

Musk has often said manufacturing efficiency would be one of Tesla's greatest long-term advantages, and the company has already given investors plenty of reasons to believe that statement. For instance, Tesla pays 10% less per kilowatt-hour for its battery packs than the next closest competitor, which happens to be General Motors. At the same time, all of Tesla's cars offer greater range than any other EV on the market. Put another way, Tesla's technology is better, and it's also cheaper.

Not surprisingly, as its manufacturing capacity has scaled in the U.S. and China, Tesla's low battery costs, engineering excellence, and highly automated production lines have collectively boosted its efficiency. In fiscal 2020, Tesla posted an industry-leading operating margin of 6.3%, according to management. And that figure ticked up to 14.6% in the third quarter of fiscal 2021.

More importantly, shareholders have reason to believe that momentum can continue. By the end of the year, Tesla is hoping to assemble its first vehicles at the Gigafactory Berlin and Gigafactory Texas, the company's newest vehicle production facilities. And as production ramps at these factories, the additional output should further boost efficiency, allowing Tesla to benefit from the marginal profitability of each car. Gigafactory Berlin, in particular, could be a gamechanger, as it will localize its business in Europe, cutting Tesla's shipping and logistics expenses.