Since AbbVie (ABBV 0.25%) began trading in December 2012, it has left the S&P 500 in the dust. AbbVie has outperformed the S&P 500 by nearly 60% in the past nine years. Most of the returns that AbbVie has generated for its shareholders have come from its top-selling drug in the world, Humira, which has grown sales from $9.3 billion in 2012 to just shy of $20 billion last year. But with the U.S. patents on Humira set to expire in 2023, AbbVie has been working diligently for many years to build a promising post-Humira future.

One of AbbVie's successors to Humira is the immunology drug known as Skyrizi. It recently received a recommendation from the European Union (E.U.) Committee for Medicinal Products for Human Use (CHMP) that it should be approved to treat adults with active psoriatic arthritis who have failed at least one other drug.

Let's take a look at why this is a huge step for AbbVie in helping to move beyond Humira. 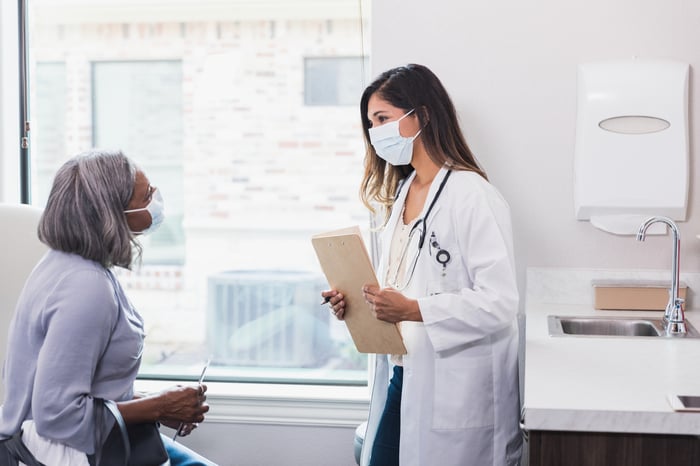 Another treatment option for healthcare providers

Psoriatic arthritis (PsA) is a form of arthritis that leads to a condition known as psoriasis, which results in patches of itchy and scaly skin. PsA often causes symptoms of joint pain, swelling, and redness. Psoriasis is estimated to impact 2% to 3% of the global population. And approximately 30% of psoriasis patients eventually go on to develop psoriatic arthritis. Because 40% of patients with psoriatic arthritis report that their condition causes major problems in their daily life, it is crucial for them to seek treatment from their healthcare providers.

Conventional synthetic disease-modifying anti-rheumatic drugs such as methotrexate are often the first-line treatment for patients with PsA. And although they work well for some patients, a recent study found that 71% of PsA patients fail their first-line therapy. This is where Skyrizi could potentially help countless patients.

Based on results announced by AbbVie earlier this year, Skyrizi was demonstrated to be far superior to placebo in treating PsA. In fact, Skyrizi was far more likely to help PsA patients achieve at least a 90% skin clearance improvement as measured by the Psoriasis Area Severity Index (PASI90) at week 24 compared to placebo. And at least 52% of PsA patients receiving injections of Skyrizi across the two Phase 3 clinical trials achieved PASI90 at week 24 against just 10% of PsA patients who were injected with placebo. PsA patients receiving Skyrizi also reported notable improvements in their joint pain more frequently than those receiving placebo injections.

Based on this data and the news that the CHMP recommended that Skyrizi be approved, Skyrizi could be only months away from hitting the market in the E.U. The PsA indication for Skyrizi would be the second indication for the drug, joining its adult plaque psoriasis indication in the E.U.

Psoriatic Arthritis would be a major indication for Skyrizi

So, Skyrizi appears to be a great treatment option for PsA patients who haven't responded to first-line treatments. But what could a PsA indication in the European Union mean for AbbVie? Factoring in the E.U.'s population of 446 million, the 2% to 3% prevalence of psoriasis, and that 30% of psoriasis patients develop PsA, there are more than 2.7 million PsA patients living in the E.U.

And assuming that approximately 70% of PsA patients fail first-line therapy, this would indicate that there are at least 2 million PsA patients in the E.U. who have failed or will fail first-line therapy. Conservatively, one could assume that Skyrizi's potential PsA patient pool is 1 million. Since there are a variety of treatments available for PsA in the E.U. like Humira (and its biosimilars), I believe that Skyrizi will be able to capture 5% of the total market. This works out to around 50,000 patients.

While Skyrizi's annual list price is $68,000 in the United States,  drugs in large E.U. countries like Germany and France are anywhere from one-third to one-half of the U.S. list price. And this is before also considering insurance adjustments that lower the annual net price. Noting insurance adjustments, AbbVie will likely receive $20,000 in annual revenue per patient for Skyrizi, which equates to $1 billion in annual sales potential for a PsA indication.

Even for a pharma stock such as AbbVie that analysts expect will generate $56.3 billion in revenue this year, a blockbuster indication like PsA for Skyrizi is a meaningful boost. Another indication for Skyrizi would add more fuel to the fast-growing drug, which has already recorded $1.2 billion in sales in the first half of this year.

A high yielder that isn't too good to be true

While AbbVie's 4.8% dividend yield may come off as a yield trap at first glance, AbbVie is proof that you can't always judge a book by its cover. This is because the payout ratio is expected to be in the low 40% range this year.

Since AbbVie was spun off from Abbott Laboratories (ABT -0.41%), AbbVie has raised its dividend each year. Because AbbVie inherited Abbott Laboratories' dividend increase streak and has raised its dividend each year since 2013, the stock is set to become a Dividend King with its next dividend increase, which is likely just days away. This will place it in the exclusive company of less than three dozen other stocks, which have raised their dividends at least 50 years straight. Analysts also expect that AbbVie will grow its adjusted earnings per share at 5% annually over the next five years, which should not only support the current dividend but allow future dividend growth.