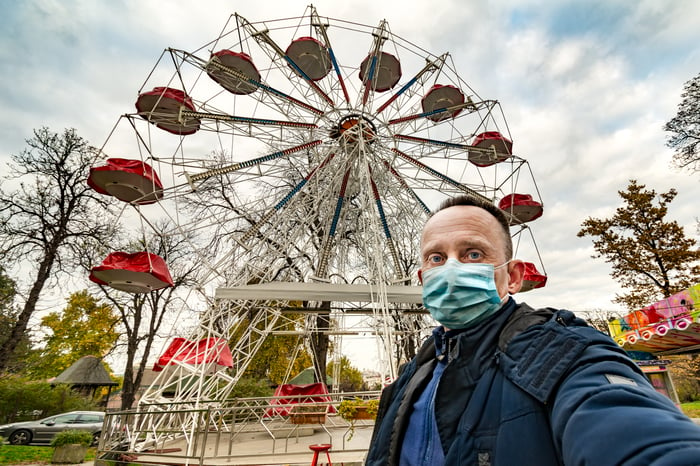 Well, comparing the third-quarter 2021 results to the numbers Six Flags produced two years ago (management said its results "are not directly comparable to [last year's Q3] due to the company's COVID-19 related suspension of operations and operating restrictions that began in mid-March 2020), Six Flags observed that attendance at the company's parks declined by about 8%. The company suffered particular declines in attendance by "pre-booked groups, inclusive of school groups who typically book in advance."

This was despite the fact that "of the company's 27 properties, only the company's theme park in Montreal continues to have capacity constraints" imposed by the government. In light of the ongoing pandemic, though, Six Flags considers only an 8% drop in attendance to be indicative of "strong demand."

It's also worth highlighting that while attendance was down, higher ticket prices meant that revenue was up -- 3% in comparison to Q3 2019. Nevertheless, profits declined versus two years ago -- down 15% on higher costs of operating in this "difficult environment."

And this, I fear, is the upshot of today's report. Six Flags may have beaten expectations in Q3, but the company is still struggling. Granted, management has announced "a transformation plan in March 2020 to reinvigorate long-term profit growth, which includes both revenue and cost initiatives." Analysts are hopeful that this plan will return the company to profitability this year (projecting $1.21 per share in full-year profit) and that profits will grow next year to $2.15 per share.

In the meantime, however, earnings are trending below 2019 levels, and the stock costs nearly 35 times current-year projected profits. Until the pandemic is fully behind us, making the case that Six Flags stock is a buy is going to be a hard sell.