And why Green Thumb Industries and Charlotte's Web followed it lower.

Marijuana stocks are in trouble Friday, as shares of Canadian cannabis company Hexo (HEXO -2.45%) tumbled 7% by 11 a.m. EDT after it reported yet another money-losing quarter. 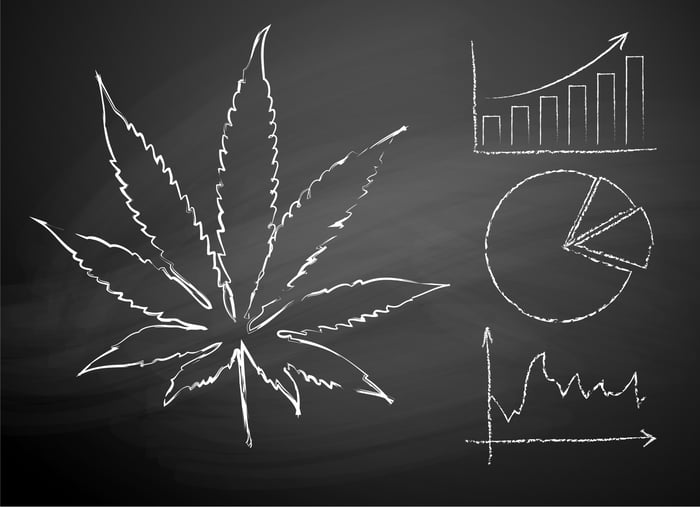 Reporting on its fiscal fourth-quarter and full-year 2021 results, Hexo noted that sales grew 43% year over year for the quarter ($38.7 million Canadian dollars) and 53% for the year (C$123.5 million). Hexo boasted that this made fiscal Q4 2021 its "best quarter of sales to date."

Hexo didn't go into much detail on the loss, preferring to keep the focus on its growing sales, but investors seem to have noticed.

The fact that Hexo also said it "acknowledges the ongoing concern with its senior secured convertible notes issued on May 27, 2021" may well be a factor that spooked investors this morning. According to the press release, the company

has sufficient funding for ongoing working capital requirements, however, current funds on hand, combined with operational cash flows, are not sufficient to also support funding potential cash requirements under the Senior Secured Convertible Note, investments required to continue to develop cultivation and distribution infrastructure, and the future growth plans of the Company.

Neither Green Thumb nor Charlotte's Web has put out any bad news of its own. On the other hand, earnings reports are due out shortly for both of these Hexo peers. Green Thumb has announced an earnings call for Nov. 10. Charlotte's Web hasn't set a date for its report, but it will probably come out sometime in mid-November since that was the month it reported quarterly results last year.

Of the two, Green Thumb looks like the cannabis stock with the brighter prospects as Green Thumb has reported positive profits in each of the last four quarters, and analysts predict the company will remain profitable in the current quarter, earning perhaps $0.10 per share, which will put it in a position of strength as nationwide legalization of marijuana approaches.

The same cannot be said for Charlotte's Web, which has been unprofitable over the past year. Analysts are forecasting a $0.04 per share loss for this quarter, losses for the full year, and even more losses next year. For a company focused primarily on selling an alternative to still-illegal marijuana (i.e., cannabidiol), the closer legalization approaches, the worse the prospects are for Charlotte Web's business.

Why Marijuana Stocks Like Sundial Growers Were Wilting Today
405%