Bionano Genomics and Ocugen could both be gearing up for a healthy rally this month.

Biotech stocks appear to be poised for a strong showing in November for a host of reasons. First and foremost, the industry's biggest headwind this year -- drug pricing reform -- was conspicuously left out of the social spending bill recently released by the White House. Second, the latest earnings reports from top big pharma companies like Merck have been better than expected so far. Lastly, scores of drugmakers are slated to release key clinical and regulatory updates this month.

Which biotech stocks could be the belles of the ball in November? Bionano Genomics (BNGO -4.07%) and Ocugen (OCGN -6.45%) are two names that growth-oriented investors should definitely have on the radars this month. Here's why. 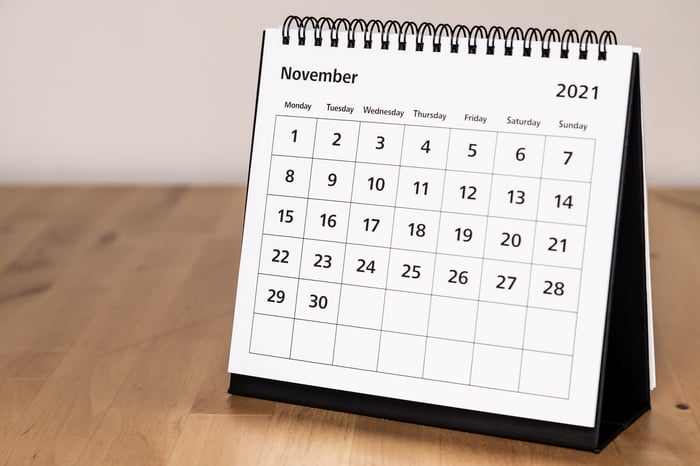 Personalized medicine is the holy grail of biotech research. Despite numerous breakthroughs in the treatment of cancer with the advent of immunotherapy, a clinical success in this field is generally characterized by response rates as low as 30%. Researchers believe that these exceedingly low response rates stem from differences in the mutation type at both the nucleic acid and whole chromosomal level within a particular patient population. Cancer, in effect, is not a monolithic disease, making it impossible to develop a one-size-fits-all type of therapy.

To boost the efficacy of these novel anti-cancer treatments, researchers thus require an accurate picture of the malignancy's genetic architecture at the individual level. That's where a company like Bionano Genomics comes into play. Bionano Genomics sports a non-sequencing-based optical mapping technology known as the Saphyr System. The Saphyr System is designed to rapidly characterize extremely long strands of genomic DNA.

What's more, the biotech recently acquired the leading genomics data analysis software company BioDiscovery. This landmark acquisition could turn out to be a game-changing business development move for the company and its shareholders. In brief, BioDiscovery's NXClinical software solution for variant analysis, combined with the Saphyr System, has the potential to accelerate the adoption of optical genome mapping at large. Moreover, this potentially best-in-class platform might ultimately grab an outsize portion of this multi-billion dollar market within the next few years.

Why should investors buy this stock in November? Bionano is slated to report third-quarter earnings on Nov. 4. While the biotech's Q3 revenue figure is unlikely to turn heads, investors should learn more about the long-term implications of this key acquisition. As a result, Bionano's beaten-down stock might finally start to show some signs of life after an eight-month downturn. Underscoring this point, the biotech's shares are currently down by a whopping 67% relative to their 52-week highs. Aggressive investors, in turn, may want to pick up some shares ahead of this upcoming earnings report.

Thanks to its popularity on social media, Ocugen's shares have jumped by an astounding 547% so far this year. The biotech's appeal to the social media crowd isn't without reason, however. Ocugen's North American co-commercialization agreement with India's Bharat Biotech for the COVID-19 vaccine Covaxin is expected to lead to a monstrous rise in its top line in 2022 and beyond. Wall Street, in fact, thinks the vaccine's North American sales may top $400 million within the next two years.

While this experimental vaccine still has to undergo clinical testing in the U.S., as well as a regulatory review in Canada, before Ocugen can start earning revenue from it, the vaccine does appear to work fairly well based on its clinical trial data in India. As such, there is a solid basis to believe that this vaccine will eventually be approved in the U.S. and Canada.

Why is Ocugen's stock a strong buy this month? Ocugen and its partner Bharat Biotech are expecting to receive word on the vaccine's emergency use listing (EUL) application from the World Health Organization (WHO) soon. The WHO has repeatedly asked Bharat Biotech for additional data prior to approving an EUL for Covaxin, leading to a lengthy delay for this key regulatory nod. But a green light could come as soon as Nov. 3, when the WHO's technical advisory group overseeing vaccine EULs meets again.

Although Ocugen will not financially benefit from a WHO EUL due to the nature of its co-commercialization agreement with Bharat Biotech, it would be huge step in the right direction for the experimental vaccine. The biotech's stock, in turn, will likely continue to march higher in response to a positive EUL decision this month.

This Innovative Growth Stock Could Double or More in 2023

Wall Street Is Still Bullish on This Punished Growth Stock -- Is It a Buy?