$5,000 might not seem like much in the tech sector, where stocks often cost hundreds or thousands of dollars per share. However, the best tech stocks can still transform a modest investment into a small fortune. 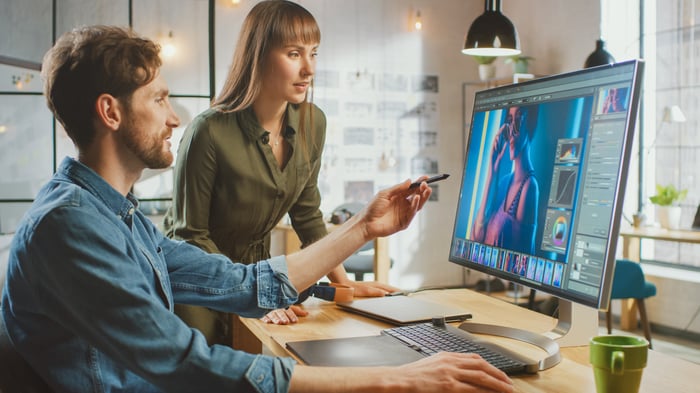 This bold transformation locked in Adobe's customers, generated predictable recurring revenue, and widened its moat. As a result, Adobe's annual revenue surged from $4.1 billion in 2013 to $12.9 billion in 2020, while its adjusted earnings per share (EPS) soared from $1.34 to $10.10 per share.

Those long-term returns are impressive, but Adobe hasn't run out of room to grow yet. Analysts expect Adobe's revenue to rise 22.5% this year and grow another 15% next year as its Digital Media (creative software) and Digital Experience (enterprise software) clouds continue to expand.

Adobe doesn't face many meaningful competitors in the creative software market, its ecosystem is very sticky, and its enterprise-facing businesses should continue to benefit from the ongoing digitization and automation of older businesses. All those qualities make it a solid long-term investment.

Microsoft also underwent a dramatic cloud-based transformation under a visionary CEO over the past seven years. Satya Nadella, who took over as Microsoft's third CEO in 2014, aggressively expanded the aging tech giant's cloud services with a "mobile first, cloud first" mantra.

That growth was led by Azure, which competes against Amazon's (AMZN -8.43%) Amazon Web Services (AWS) in the cloud platform market, as well as Office 365, Dynamics in the customer relationship management (CRM) market, and enterprise-oriented social network LinkedIn. Microsoft also continued to broaden its hardware portfolio with new Xbox consoles and Surface devices.

Seven years ago, AMD was in serious trouble. Its newest central processing units (CPUs) performed poorly against Intel's (INTC 0.43%) CPUs, and it was fighting a losing battle against Nvidia (NVDA -2.81%) in the high-end GPU market.

But after Lisa Su took over as AMD's CEO in 2014, the struggling chipmaker experienced a historic turnaround. Under Su, AMD launched a new generation of Ryzen CPUs for PCs and Epyc CPUs for servers. The chips were well received, and original equipment manufacturers (OEMs) scooped them up as Intel repeatedly struggled with chip delays, shortages, and abrupt leadership changes.

Between 2014 and 2021, AMD's share of the entire x86 CPU market rose from 23.4% to 39.4%, according to PassMark, as it gained ground against Intel across the desktop, laptop, and server markets. Its new Radeon GPUs kept pace with Nvidia's latest GPUs, and AMD continued to sell custom APUs for Sony and Microsoft's latest gaming consoles.

AMD will likely stay ahead of Intel as it continues to outsource its manufacturing to Taiwan Semiconductor Manufacturing's (TSMC) (TSM -2.06%) foundries. Intel plans to strike back at AMD and TSMC by doubling down on its own foundries, but that costly plan could backfire and result in even more market share losses to AMD. As a result, AMD remains one of the best long-term plays in the semiconductor segment.