It's no secret that Bristol Myers Squibb (NYSE:BMY) will need to innovate to grow as its three top drugs -- Revlimid, Eliquis, and Opdivo -- face patent expirations during the next decade. Fortunately, Bristol Myers Squibb got great news from a major European regulatory agency earlier this month.

The Committee for Medicinal Products for Human Use (CHMP) recommended that Bristol Myers Squibb's Zeposia be approved to treat adults with moderately to severely active ulcerative colitis who didn't respond to at least one other conventional therapy or biologic agent.

Let's dig into Zeposia's efficacy in treating patients with ulcerative colitis and why I believe this indication, which would be effective throughout the European Union if formally approved, could be a boon for Bristol Myers Squibb. 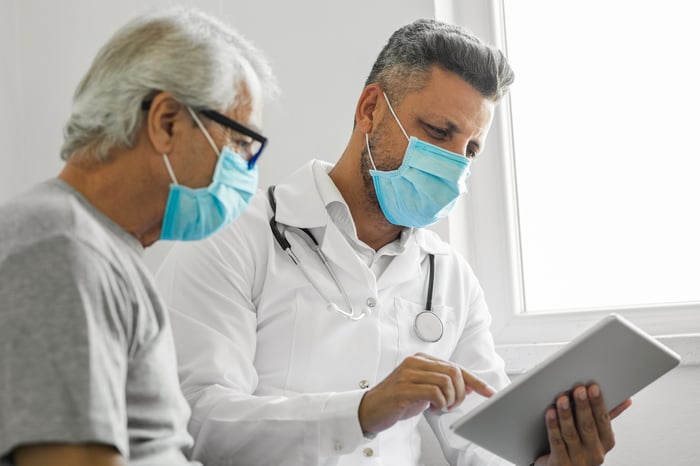 The disease often progresses, and preventing that requires monitoring and medication administered with the oversight of a gastroenterologist.

Bristol Myers Squibb's Zeposia, a once-daily pill, could soon become part of the treatment regimen in the EU. The medication already has been approved as a multiple sclerosis (MS) therapy in the U.S. and the EU. Patients with moderate to severe ulcerative colitis taking 1 milligram of Zeposia each day achieved clinical remission of their disease at a much higher rate than those receiving a placebo.

In fact, Phase 3 clinical trials revealed that 37% of patients on Zeposia achieved and maintained remission at the 52-week mark of treatment compared to just 18.5% of patients on a placebo. No new safety concerns were observed in Phase 3 trials of the drug, which means that it remains relatively safe compared to its benefit profile.

Zeposia could soon gain access to a massive market

So, with Zeposia likely months away from being approved for its second indication in the EU, what could that mean for pharma stock Bristol Myers Squibb?

There are a number of drugs already on the market for moderate to severe ulcerative colitis, such as AbbVie's (NYSE:ABBV) Humira and Johnson & Johnson's (NYSE:JNJ) Stelara. Zeposia won't displace them, but I believe it is reasonable to expect it to seize 8% of the market, or about 26,000 patients.

Zeposia's list price for a year's supply is $89,000 in the U.S. Since drugs in the EU are a third to half the cost of drugs in the U.S., I will assume that the list price is $30,000 in the EU. Further reducing this figure to $15,000 annually for insurance adjustments would result in $400 million in annual revenue for the drug. This would represent a slight boost in Bristol Myers Squibb's revenue base given that analysts are forecasting $46.4 billion in revenue for this year.

For context, Zeposia generated $46 million in sales during the first half of this year. That's because the drug only recently received approval from the U.S. Food and Drug Administration (FDA) for an ulcerative colitis indication in May. And its approvals in the U.S. and EU for MS came in the early months of COVID last year, when many patients without life-threatening conditions weren't going to hospitals. That slowed the rollout of the drug.

Now that more patients returning to the health-care system, and with the European ulcerative colitis indication likely coming in a few months, Zeposia has plenty of potential to boost sales for Bristol Myers Squibb.

Bristol Myers Squibb has worked very hard to both develop and acquire its next generation of drugs over the past few years. One piece of this was Bristol Myers Squibb's $13.1 billion acquisition of MyoKardia last year. MyoKardia is a late-stage biopharma company that is focused on treating serious heart diseases. Its most prominent drug is mavacamten, which analysts anticipate will reach peak sales of $2 billion annually if approved by the FDA. With a decision expected from the FDA by the end of next January, mavacamten could be on the market by early next year. Bristol Myers Squibb also has more than 50 compounds in development, which include two earlier stage compounds that were acquired in the deal for MyoKardia.

This is among the reasons analysts are forecasting that Bristol Myers Squibb's earnings per share will rise at an annual clip of 7% during the next five years. And since Bristol Myers Squibb's dividend payout ratio will be in the mid-20% range this year, there is plenty of room for the company to raise its dividend, just as it has done for the past 12 years straight.