Earnings season is upon us. While posting good quarters over time is a recipe for success, it's important not to focus too much attention on a three-month window. However, Wall Street's insatiable appetite for valuing a company's quarterly performance against expectations means that even large and stable stocks can make big moves to the upside or downside based on earnings information.

Defense dynamo Lockheed Martin (NYSE:LMT), premier pipeline player Kinder Morgan (NYSE:KMI), and coffee kingpin Starbucks (NASDAQ:SBUX) all slipped on earnings. Each stock has been down 5% or more over the last week. All companies can face challenging periods, but the great ones are able to persevere. Here's why each of these three dividend stocks is a good buy now, and why buying all three as a basket provides even more advantages. 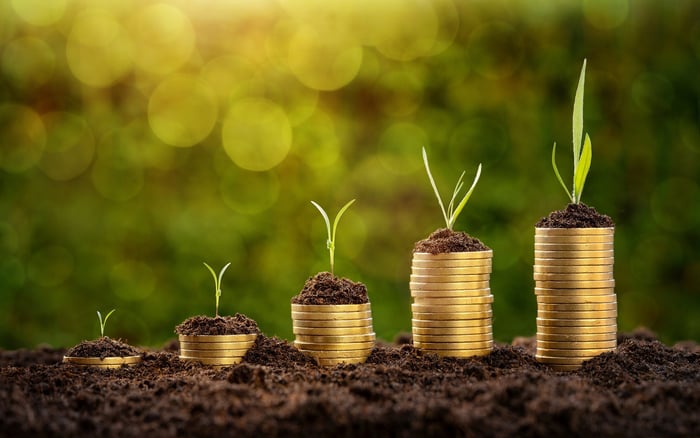 Lockheed Martin stock suffered its largest single-day decline in a decade last week as Wall Street scrutinized the company's 2021 guidance and lackluster medium-term forecast. Lockheed's growth has slowed to a trickle in recent years as defense spending from its largest customer, the U.S. government, is growing in the low- to mid-single digits every year.

What Lockheed lacks in growth it makes up for with an inexpensive valuation, strong balance sheet, reliable revenue stream, and a stable and growing dividend. With just a 15.3 ratio of price to earnings (P/E) and an 18.1 ratio of price to free cash flow, Lockheed stock is currently trading at a discount to its historic range.

The U.S. government remains a reliable buyer no matter the economic cycle. This consistency was put on display in 2020 when Lockheed posted record numbers while other industrial stocks were positing their worst annual performances in years. Lockheed's industry-leading position and diverse business segments back up future dividend raises. Add it all up, and Lockheed Martin is one of the best dividend stocks in the S&P 500 because it generates ample cash to cover its dividend obligation and stock buybacks.

Lockheed Martin's 3.4% yield is impressive, but Kinder Morgan's 6.5% yield is so large that investors could double their money by 2033 on dividends alone. Ranking as the fourth-highest dividend yield out of S&P 500 components, Kinder Morgan has made paying and raising the dividend its core means of driving shareholder value.

Like Lockheed Martin, Kinder Morgan had an excellent 2020 (considering the circumstances). Its revenue and earnings before interest, taxes, depreciation, and amortization (EBITDA) each fell just 11% in 2020 compared to 2019. For context, 2020 was the worst year since the crash of 2014 for oil and gas companies.

In its recent earnings call, Kinder Morgan gave relatively muted guidance for spending, choosing instead to take a frugal approach to its investments. The company also hinted it would take on fewer megaprojects, focusing instead on less capital-intensive endeavors with a greater chance of making a profit. For income investors, this is a dream come true because Kinder Morgan is essentially taking a defensive position by prioritizing its balance sheet and dividend instead of growth. 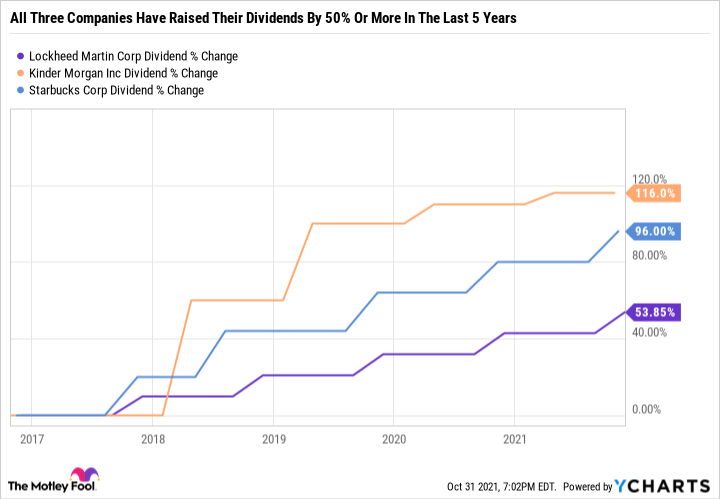 Over the last decade or so, Starbucks has undergone a transition from a fast-growing company to a moderate growth company that also pays a dividend. Since initiating a quarterly payout of $0.05 per share in 2010, Starbucks has increased its payout every year. In September, it raised its quarterly dividend from $0.45 per share to $0.49.

An annual yield of 1.9% might not seem like much compared to Kinder Morgan and Lockheed. In Starbucks's defense, it is growing faster than both of those companies.

A resurgence of COVID-19 cases is hurting its sales in China (which is its second-largest market). But even with that challenge, the company just posted its highest quarterly revenue in its history. It also earned a record $4.87 billion in fiscal year 2021 operating income, booked a respectable $3.54 in net earnings per diluted share for the fiscal year, and grew its active Starbucks Rewards Members to 24.8 million. Starbucks expects to grow sales by between 8% to 10% per year over the long term, but in fiscal year 2022, the company is forecasting sales growth around 12% to 13%. Given that issues in China appear to be a short-term problem, last week's sell-off of Starbucks stock looks like a buying opportunity.

Buying equal parts of all three stocks would give an investor an average yield of 3.9% while exposing a portfolio to three completely different industries. For most retirees, that's a high enough return to supply a sizable portion of income in retirement. What's more, all three stocks play off each other's strengths and weaknesses. Kinder Morgan's and Lockheed Martin's low but consistent growth, even during recessions, helps offset Starbucks's dependence on a good economy.

Kinder Morgan is taking a growing role in the liquefied natural gas industry. It operates the pipelines that transport natural gas to the U.S. Gulf Coast, where the gas is cooled and condensed for export to buyers overseas. The company's growing exposure to foreign energy buyers along with the fact that 38% of Starbucks stores are outside the U.S. and China means that this basket of stocks isn't solely dependent on the U.S. economy.

On their own, Lockheed, Kinder Morgan, and Starbucks are all good dividend stocks. But combined as a basket, they offer even more advantages.