The company is still growing, but not as fast as some were expecting.

Shares of chicken-wing restaurant chain Wingstop (WING 0.88%) fell hard on Wednesday morning following the release of financial results for the third quarter of 2021. The company showed ongoing growth, but results fell short of expectations, causing the stock to fall. Early in the session, it was down 14%. But as of 11:15 a.m. EDT today, it was rebounding and only down 4%.

For the third quarter, Wingstop reported revenue of $65.8 million, an increase of almost 3% from last year. That might seem meager, but remember that the company was hugely successful in 2020. In fact, in the third quarter of 2020, sales were up almost 33% and profits were so strong that management was motivated to declare a special dividend of $5 per share. Continuing to grow revenue on top of last year's gains is quite impressive. 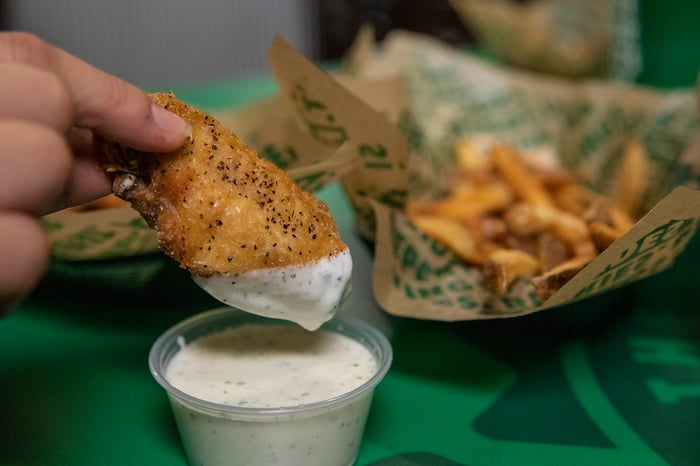 But results fell short of expectations. The company doesn't give quarterly guidance, but analysts had expected revenue to be closer to $75 million, according to The Fly. While analysts don't have any bearing on how a business performs, they do play a role in setting near-term market expectations. So when those expectations go unmet, as with Wingstop today, it's normal to see some sort of pullback.

Restaurant companies are currently struggling with labor costs and food inflation, and Wingstop is no exception. But two things are in the company's favor. First, most of its orders are to-go, meaning it can get by with a relatively small staff. Second, the company is creatively using more of the chicken to secure better pricing than it would from buying wings alone. And the launch of its Thighstop brand (an important part of this strategy) is off to a good start, according to management.

The end result is that Wingstop's franchise partners have better restaurant-level cash flow right now than the last time inflation was an issue. This means that franchise partners will likely continue to open new Wingstop locations at a rapid pace, as they have in recent years, helping the company to continue to grow.

Could Wingstop Be the Next Domino's Pizza?
409%