While I can't predict the future, it's sure fun to try.

How in the world can anybody predict the top stocks of 2035?

Many of those stocks have gone sideways or dropped precipitously over the last 15 years. Microsoft is the sole survivor in the current top 10 list. And it's now the biggest company in the world, with a $2.5 trillion market cap. Apparently, Marc Andreessen was right when he predicted that software will eat the world.

I believe this trend will continue. And the strongest stocks will be those technology leaders that provide services that humanity deems essential. So here are my picks for the top 10 stocks of 2035. 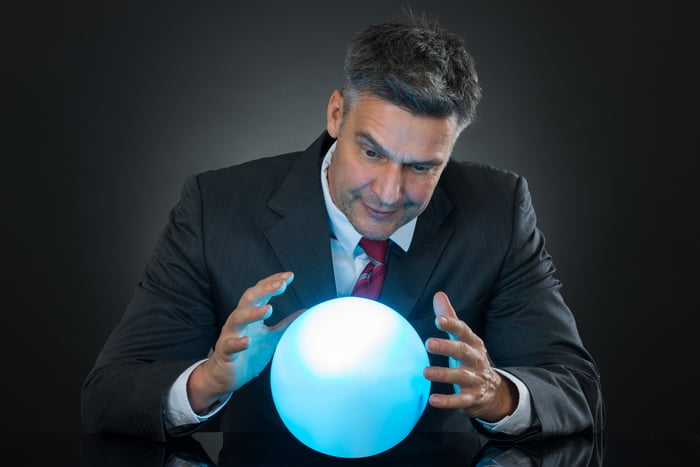 Airbnb (ABNB 5.96%) is the smallest stock on this list, and it would probably have to go up at least 30 times in value to make the top 10 of 2035. A 40-bagger or a 50-bagger may even be required to make the list. Could Airbnb pull off this magnificent feat?

I'm bullish because Airbnb is going after truly massive markets. The company estimates its total addressable market at $3.4 trillion. Most of your large software companies have much smaller market opportunities.

Airbnb is not selling technology. It's using technology to allow consumers to visit and stay anywhere around the world. Airbnb is revolutionizing how we travel. And because of the network effect, no other tech company will be able to dislodge it from its catbird seat.

Tesla (TSLA 11.00%) is already in the top 10 now. So the question is not whether it can make the top 10 over the next decade and a half, but whether it can stay there. I say it can, because of its dominant mindshare in one of the most important innovations in the 21st century: the electric car.

If you look back from now, one thing that struck me is how important oil was. In 1999, the height of the dot-com bubble, ExxonMobil and BP were two of the biggest stocks in the world. When the financial crisis hit in 2009, two more oil stocks joined their ranks: PetroChina and Petrobras.

All of those stocks have dropped off of today's top 10. I believe oil will continue to recede in importance, and Saudi Aramco will drop out as well. Meanwhile, Tesla will survive and thrive.

I am perhaps biased in thinking that American companies will continue to dominate the world economy 15 years from now. I am pessimistic on Chinese stocks because the dictatorship in China is incredibly risky for that whole sector. But there is a company that is surviving and thriving in Asia. And that is Singapore-based Sea Limited (SE 2.31%).

Sea has a ferocious appetite for growth. Since its initial public offering in 2017, the stock has gone up 20-fold. Sea has led the way with its freemium model in mobile gaming and its No. 1 game for the smartphone, Free Fire.

After establishing a gaming foothold in a new market, Sea introduces its shopping platform, Shopee, and its payments arm, SeaMoney. Sea is dominant not just in Asian markets but is also emerging as a winner in South America and India. This is a beautiful tech stock in emerging markets. And I believe Sea is perhaps the only internet company in the world that can give Amazon (AMZN 3.04%) a run for its money.

Apple (AAPL 1.37%) has a heck of a head start over the rest of the stock universe. Airbnb can go up 20 times in value, and it will still be smaller than Apple is today. It would not surprise me at all, however, if Apple were to lose its top 10 spot over the next decade. Apple makes a lot of money off its App Store and all the fees it charges software companies for access. I think it's likely that Apple will start seeing serious antitrust scrutiny over its business model, similar to what Microsoft saw two decades ago.

Nonetheless, I remain bullish on Apple and its dominance of consumer hardware. The company's brand power is unrivaled. And if CEO Tim Cook is even half-right about the importance of virtual reality and augmented reality, Apple will cement its top 10 status in the future -- and then some.

I am very bullish on Square (SQ 3.25%). The fintech revolution is in its early days. Square is definitely riding a crypto wave. But the company is also revolutionizing the banking industry. Square has huge informational advantages over traditional banks. The company has so many data points in regard to all the companies in its network. Square also has access to your company's sales numbers and can easily and quickly gauge the risk in making you a loan. This advantage in speed and accuracy over the traditional banks will make Square the biggest financial stock over the next decade and a half.

I believe at some point Alphabet (NASDAQ: GOOG) (GOOGL 1.90%) will spin out its autonomous car division, and Waymo will surge past its parent. And while it may have competitors, such as Cruise, a division of General Motors, or perhaps Tesla, I believe Google's AI capabilities will win the day.

The real competition might not come from the land, but from the air. Electric air taxi service Joby Aviation, with collaborators including Uber, Toyota, and the U.S. Air Force, may ultimately give Waymo a run for its money as ground traffic forces man into the air.

Shopify (SHOP 3.62%) is arguably the most important software company in the world. The company is synonymous with internet commerce and giving small business owners the means and ability to compete with mighty Amazon. Shopify's stock has been ridiculous since its IPO, up almost 6,000% in six years. 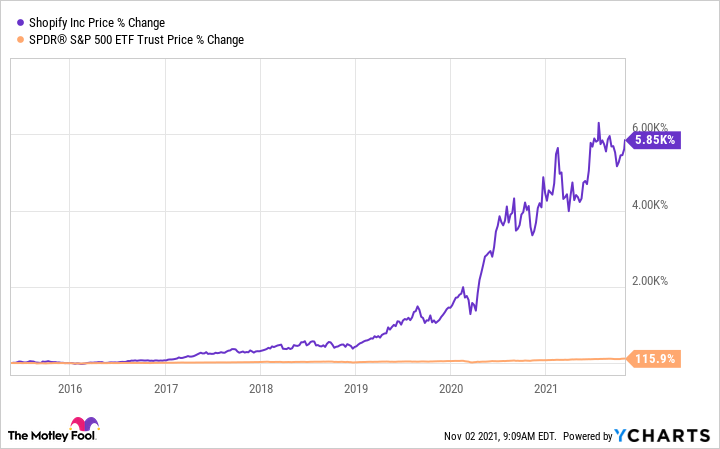 This dramatic rise will continue because Shopify's market opportunity is so gigantic. The retailing market is $25 trillion or so right now. More and more shopping will shift online, and Shopify will be the tech engine that makes this all happen. Shopify may very well pass Amazon in market size one day.

While Nvidia (NVDA 2.84%) is not yet in the trillion-dollar club, the chipmaker is already one of the 10 largest companies in the world. The company's chips are already key in gaming, mobile, and automotive markets. But it's the company's forays into computer chips for artificial intelligence that caused the stock to shoot into the stratosphere.

While Elon Musk's space travel company is still private, in its latest funding round the company was valued at $100 billion. Right now the company has two major projects: Starlink and Starship. It's entirely possible that Musk will spin out Starlink as a separate entity. He has said that will do so when its cash flows are more predictable. At a tech conference last year, Musk estimated the market opportunity for putting satellites into space at $3 billion a year, while providing broadband internet would perhaps add another $30 billion in annual revenue.

It appears to me that SpaceX is now dominating the race for space, and I believe this company will receive crazy valuations if and when it ever comes public. The upside really is unlimited.

Amazon is not a sure thing, of course -- no company is. The king of internet retail is facing competition from a sea of mom-and-pop outfits, powered by Shopify. And even Amazon Web Services is facing competitive threats. Amazon is currently dividing its cloud pie with tech giants Alphabet and Microsoft. But perhaps the real competition will come from DigitalOcean, the hugely popular provider of cheap, customer-friendly cloud services.

Nonetheless, Amazon will adapt and overcome, finding more and more sources of revenue in the future. Outside of Apple, this is the strongest consumer brand on this list. Amazon has powerful mindshare, and its markets are so large, it's unlikely to see much in the way of antitrust scrutiny. This company has perhaps more optionality than any other company in the world. And that's why Amazon is my pick for the No. 1 stock of 2035.