The Dow Jones Industrial Average (DJINDICES:^DJI) has added 330 points, up almost 1%, in mid-morning trading on Nov. 5, following the release of the October jobs report from the U.S. Department of Labor. According to the survey, employers added 531,000 jobs last month, better than expected and a boost in jobs growth over prior months.

This is helping boost several Dow stocks modestly, with Visa (NYSE:V) shares up 3%, Walt Disney (NYSE:DIS) shares up 2.7%, and Boeing (NYSE:BA) shares up 2.4% as investors remain optimistic about a continued economic recovery.

On the downside of the ledger, shares of Merck & Co (NYSE:MRK) are down almost 9% after data from a competing COVID-19 pill showed it was significantly more effective at treating the disease than Merck's recently approved treatment. 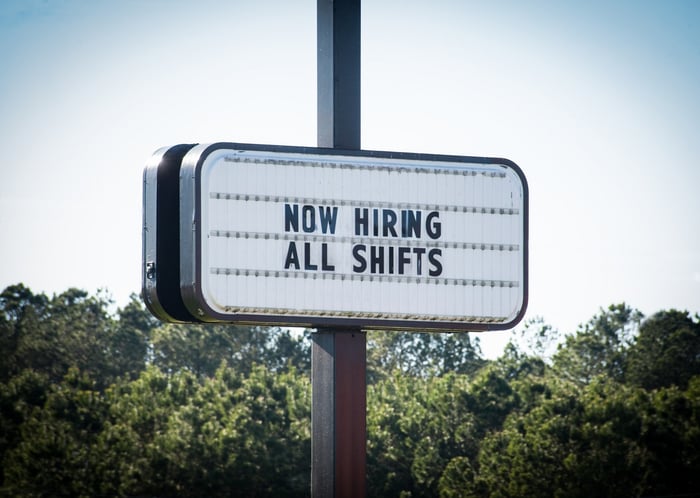 It's looking like the worker shortage situation might not be as dire as we thought. In addition to beating expectations for October, The Labor Department also updated jobs numbers for August and September, revising those months upwards to 483,00 and 312,000 new jobs. In both cases, the revised number is more than 100,000 jobs higher than initial estimates, adding almost 230,000 more jobs created those two months than the initial survey captured.

Also moving higher are Boeing and tech giants IBM (NYSE:IBM) and Intel (NASDAQ:INTC), gaining on expectations of both increased consumer and corporate spending on technology and tech services, along with evidence that turnaround efforts at all three are starting to pay off.

In early October, investors were wildly excited by the data from Merck's Lagevrio study. The company's oral COVID-19 pill, which would be the first to market, showed that it cut hospitalization for COVID-19 in half, sending shares up more than 10% over the next month: 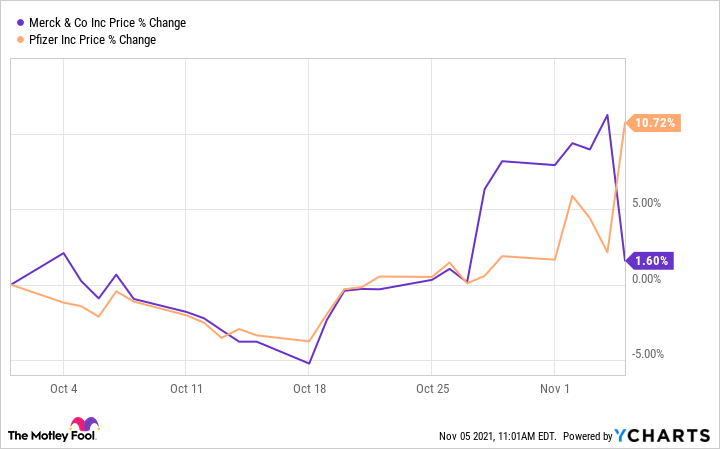 Today, fellow pharmaceutical giant Pfizer (NYSE:PFE) announced that its own pill, called Paxlovid, was far more effective, reducing the risk of hospitalization or death for adults at risk of severe disease by 89%. In other words, Pfizer's pill looks to be significantly more effective than Merck's at controlling severe disease, giving it a massive advantage as the likely treatment of choice for high-risk adults with COVID-19.

The results were so impressive, the pivotal trial for the drug was ended early, as it plans to apply for FDA authorization soon. Merck was expecting it could earn $7 billion annually from Lagevrio over the next several years; it's looking likely that Pfizer could be getting the lion's share of this business now.