However, it's going to take a serious jolt to spook short sellers and knock this stock out of its rut.

It's been a tough year for Lemonade (LMND -2.50%) investors. Share prices of the strangely named insurance technology company are down more than 60% from their January peak and are still within reach of October's multi-month lows. Every rebound attempt during that timeframe has failed. It's all been very discouraging.

Shareholders can take at least some solace in sticking with the trade this far, though, because Lemonade is primed to be catapulted higher by a short squeeze. 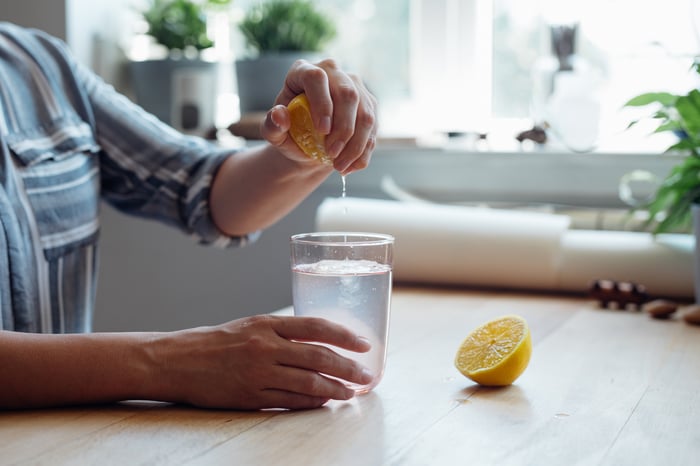 A short what? A short squeeze, or gains that are so brisk and big that short sellers of a particular stock panic, buying the stock to "cover" their short positions, which of course buoys that stock's price even more.

Most investors understand the premise of buying low and selling high, in that order. That's not the sequence one has to follow, however, to make money in the market. It's entirely possible to sell high, and then buy low. It's called short selling, meaning you're selling something you don't actually own, but plan on buying later.

The catch: The only way to close out a short position is by buying those shares back. You can only hope that you're able to do so at a palatable price.

The only way to close out a conventional long trade is to sell the shares you own, and again, you can only hope you like the exit price you're getting. Unlike the usual buy-then-sell position, though, the potential loss on a short position has no ceiling. Knowing this risk all too well, individuals and institutions can panic when short positions start creeping into the red. Once they get too deep underwater, this panic results in enough buying to replace the number of shares of stock sold short. This panic-induced buying also applies bullish pressure to a stock, which can prompt other short-sellers into their own panic-induced buying, kick-starting a vicious cycle often referred to as -- you guessed it -- a short squeeze.

The stage is set for such a short squeeze from Lemonade.

The image below speaks volumes, plotting this year's fall in Lemonade stock's price against a steep rise in the number of Lemonade shares being sold short. Traders bet against the stock in a big way beginning in the latter half of 2020, when the stock started to rally following last July's IPO. But the more it's pulled back from January's high, the more the market's sold the stock short. As of the latest tally, 13.5 million of Lemonade's 61.5 million outstanding shares are shorted. That's an incredible 22% of the total number of shares and an even-greater 31% of the stock's float (not shown) of 42.7 million shares. 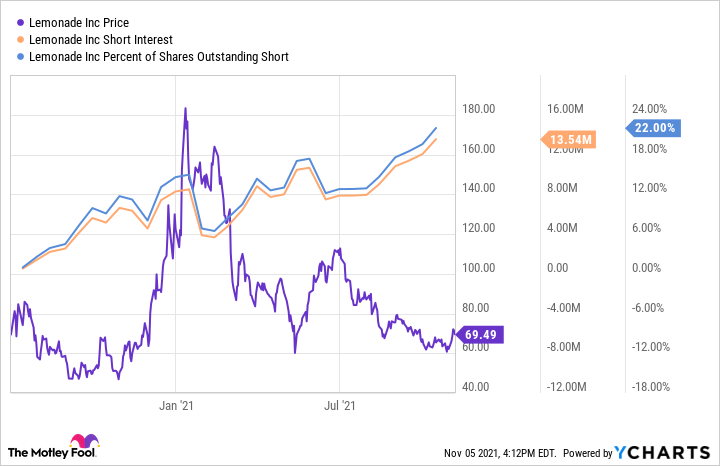 Those numbers make Lemonade one of the market's most heavily shorted names.

The right catalyst is needed

All of these bets being made against Lemonade are reasonable enough. While the company is on pace to grow its top line to the tune of 31% this year and 63% next year, the company is still bleeding money. It's also (seemingly) not poised to make progress on this front. This year's projected loss of $3.83 per share is actually a smaller loss than analysts' estimates for a loss of $3.89 per share next year. These same analysts also collectively rate the stock as a hold -- which isn't damning, but certainly not encouraging either. CFO Tim Bixby is also shedding a bunch of his LMND shares, perhaps sending a concerning message about his faith in the stock's prospects. There's no denying any rally would be well tested.

Given the sheer depth of all the short-selling, though, the prospect of a short squeeze is big enough to at least put Lemonade on your watchlist. It could take several days of firm gains to really start rattling all the traders that have bet the stock will continue to slide lower. But if they start to panic, it should be clear that it's happening. Last week's 27% intraweek rally from the previous week's close obviously wasn't enough, as the bulk of that gain was given back by the time Friday's closing bell rang.