These fundamentally strong stocks can generate huge returns in the coming years.

Investing in growth stocks has proved to be a profitable bargain since 2009. However, these stocks also expose a portfolio to high volatility. This was seen early this year in a rotation out of growth stocks into value shares, causing many growth stocks to tank dramatically.

But it is possible to enjoy the upside potential of growth investing while limiting downside risk. For that, you need to pick companies with robust competitive advantages and solid secular tailwinds. Gaming, cloud computing, big data, and artificial intelligence are some of the more persistent trends in the market today. Building on that idea, Unity Software (U -1.06%) and LendingClub (LC -2.82%) seem to be two growth stocks that investors can buy without much hesitation. Here's why. 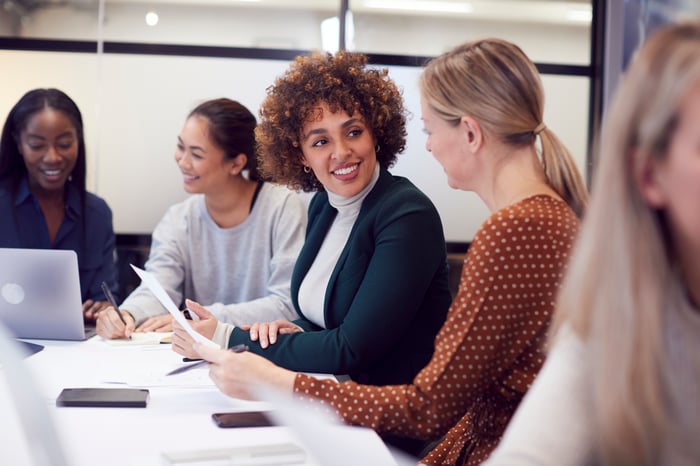 The company also earns usage-based fees for helping clients monetize their games through advertising and in-app purchases, thereby allowing it to grow with its clients. The revenue-sharing model makes Unity's business more resilient and less dependent on new-customer acquisition compared to other gaming companies.

While gaming remains the bread and butter for Unity, a bigger opportunity might unfold for the company in the coming years. It is leveraging its augmented reality (AR) and virtual reality (VR) capabilities to create immersive 3D experiences for training, simulation, robotics, and collaborative work solutions. It is also venturing into new sectors such as automotive, media, and architecture. The proposed acquisition of a remote desktop and streaming technology company, Parsec, will further strengthen Unity's capabilities.

Unity has been growing its top line at a fast clip. The company has not released the third quarter (ending Sep. 30) earnings report. But trailing-12-month revenue was up 45% year over year to $929.5 million. The company is not yet profitable but has a strong balance sheet with a cash balance of $1 billion and zero long-term debt.

The company has been very successful in cross-selling, as evidenced by its second-quarter dollar-based net expansion rate of 142%. This implies that existing customers spent 42% more compared to the same quarter of the previous year. It is also seeing rapid growth in its high-value customer cohort: Clients generating more than $100,000 in revenue increased year over year by 24% to 888 in the second quarter. Unity estimates its total addressable market opportunity to be around $29 billion. With an annual run rate still close to only $1 billion, there is a significant runway left for this company to further grow in the coming years.

Once a pure peer-to-peer lending player, LendingClub transformed itself into a digital marketplace bank after acquiring Radius Bank in 2020. The company originates unsecured personal loans for refinancing credit card bills and other major purchases, as well as secured loans for auto loan refinancing through its digital marketplace. While the company directly sells off 75% to 85% of these loans in the secondary market, the rest are retained on its balance sheet as investments. LendingClub has successfully positioned itself as a leading digital lender in the fast-growing U.S. consumer finance space, a market opportunity estimated to be around $1 trillion.

Instead of FICO scores, LendingClub assesses the borrowing capacity of its 3.8 million customers using advanced machine-learning models. These models have been trained with over 150 billion cells of data points collected for multiple loans across their entire life cycle. This technology-based approach to lending has enabled LendingClub to offer lower credit rates to its customers, while also significantly reducing the company's marketing expenses, delinquency rates, and fraud losses. The company is also focusing on selling auto loan refinancing to its existing customer base, a move that is helping reduce origination costs as well as credit risk.

The acquisition of Radius Bank has given LendingClub access to the bank's low-cost deposits, which in turn helps reduce the company's cost of capital. The bank charter now allows LendingClub to hold a portion of loans on its balance sheet, which in turn helps bring in recurring net interest income. The company is also leveraging its banking capabilities to strengthen its buy now, pay later business to refinance large purchases in areas such as medical, education, and dental costs.

The success of these strategic moves became apparent in LendingClub's results for the third quarter, which ended Sept. 30. The company has managed to widely surpass both revenue and earnings consensus estimates. It now expects fiscal 2021 revenue to be in the range of $796 million to $806 million, up from the previous estimate of $750 million to $780 million. The lender also expects a positive net income of $9 million to $14 million in fiscal 2021, which is a huge improvement from its previous loss estimate of $3 million to $13 million.

LendingClub's share price has increased by 327% so far this year. Yet the company trades at only 25 times forward earnings. On the other hand, its closest competitor, Upstart Holdings (UPST -7.51%), trades at 199 times forward earnings. Against this backdrop, there is much opportunity for significant earnings multiple expansion and subsequent share price increase for LendingClub in the coming years.

Manali Bhade has no position in any of the stocks mentioned. The Motley Fool owns shares of and recommends Unity Software Inc. and Upstart Holdings, Inc. The Motley Fool has a disclosure policy.