If you sense an opportunity in the market's anxiety about China's real estate meltdown but are not sure what to do, you've got options. One is to buy an exchange-traded fund that will give you broad exposure to the Chinese economy. But if you're worried that the Chinese economy is still too vulnerable, there is another way: Buy high-quality, wide moat Chinese businesses, including firms with large international footprints.

It's not easy to invest calmly in a foreign crisis, especially since China's business climate is comparatively opaque and prone to government intervention. But it's doable if you focus on companies that have three factors working in their favor:

Let's examine some of China's top international players through this lens. I will present two stocks to consider and one to avoid. 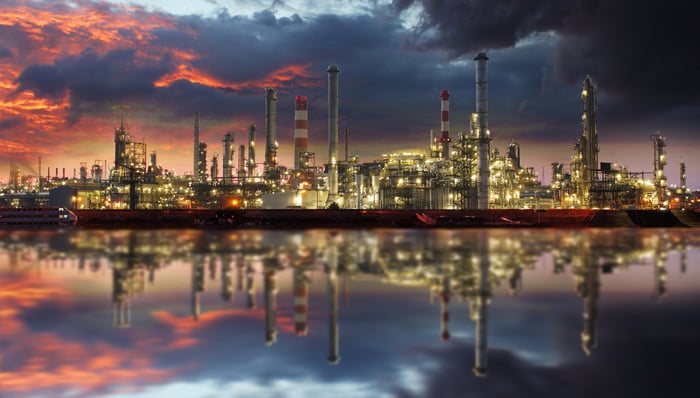 PetroChina (NYSE:PTR), Asia's largest oil and gas producer, may be a Chinese government-granted energy monopoly and a royalty on the continued long-term growth of Asia's economies. By all appearances, the stock is an absolute steal.

In the third quarter, PetroChina reported a book value by International Financial Reporting Standards of about $195 billion at current exchange rates. Meanwhile, its U.S. stock has a market cap of only $135 billion at recent prices -- an implied discount of more than 30%. And as energy prices around the world soar, it is more likely that PetroChina's book value understates the economic value of its oil reserves.

Under Chinese accounting standards (which, in PetroChina's case, have usually given results close to IFRS), for the first nine months of 2021, PetroChina is reporting about $35 billion of net cash flows from operating activities and about $26.6 billion of capital expenditures. On an annualized basis, that means PetroChina is on track to earn about $11.2 billion in free cash flow this year.

But, again, it is currently selling for a market cap of only $135 billion, implying a price to-free-cash-flow multiple of only 12 -- likely a fantastic price for a business of this quality in today's inflation-ready world.

Foxconn Technology Group, officially Hon Hai Precision Industry Co. (OTC:HNHPF), is the famed Taiwanese contract manufacturer that makes all the chipsets and hardware inside Apple's iPhones, Alphabet's Google Pixel, Amazon's Kindle, and, as of today, almost all the hardware used in the world.

The company's financial results have been formidable. From 2016 to 2020, despite President Trump's trade war and the coronavirus pandemic, revenue grew by about 23%, while free cash flow more than doubled. This growth is from a company whose sales already approach $200 billion a year.

Foxconn is now diversifying out of the price-competitive world of contract manufacturing. In 2018, Foxconn acquired U.S. hardware maker Belkin, picking up world-famous Internet router brand LinkSys and a newer smart home product, Wemo, in the process. This is a significant move up the value chain for a company that earlier only made other companies' goods.

In 2018, Foxconn spun off a new subsidiary, Foxconn Industrial Internet (FII), in one of Mainland China's biggest-ever IPOs. FII's focuses on new high-value technologies, ones where China may have an especially exciting future. These include automated unmanned factories, next generation cloud service equipment, Internet-controlled industrial manufacturing, and the Internet of Things. Despite FII's separate IPO, Parent Foxconn continues to own about 16% of the new company, and we benefit from this as shareholders.

And one to avoid: Tsingtao Brewery

Tsingtao Brewery (OTC:TSGTY) produces China's second-most-popular beer brand, capturing about 15% of the domestic market. But Tsingtao also accounts for more than 50% of the country's beer exports. Its namesake brand has long been China's top-selling beer in the United States.

Despite such compelling features, Tsingtao is a great example of the kind of Chinese stock that is probably worth avoiding.

This is for the simple reason that Tsingtao's official financial statements for investors are not easily accessible through the company's website: Many links appear to be broken. Prospective investors may still be able to contact the company directly to acquire its reports. But these broken links, in my view, constitute a major red flag. Public markets investors must pay careful attention to signals, however small. It strains credibility, in my view, that a senior executive at Tsingtao would not already be aware of this defect.

It's not always easy to understand the news coming out of China these days. It's unquestionably scary to jump into any nation's stock market in the middle of an economic crisis. As Tsingtao's case indicates, concerns about honesty in Chinese financial reporting remain real. And the ethical problems with investing in China shouldn't be taken lightly.

However, by separating China's stormy macroeconomic picture from the long-term prospects of promising individual companies, we may be able to discover a few silver linings.

Companies like those discussed have more than the implicit blessing of the Chinese government. They have large international footprints and economic moats arguably robust enough to succeed almost anywhere in the world.

If you can identify a few such Chinese businesses you are comfortable owning, buy for the long term once prices fall. You might be very pleased with the results.