Please ensure Javascript is enabled for purposes of website accessibility
Log In Help Join The Motley Fool
Free Article
Join Nearly 1 Million Premium Members And Get More In-Depth Stock Guidance and Research
By Will Healy – Nov 14, 2021 at 8:17AM

Pivotal roles in the 5G revolution will bolster these stocks.

The ongoing upgrade to 5G wireless networks will likely have wide-ranging effects on the communications industry. The faster speeds enabled by the technology will offer new devices and services not possible in the previous 4G era. Many companies continue to capitalize on this opportunity, and Broadcom (AVGO -1.34%), Qualcomm (QCOM -0.61%), T-Mobile (TMUS -1.20%) are 5G stocks that have positioned themselves to also benefit investors amid the transformation. 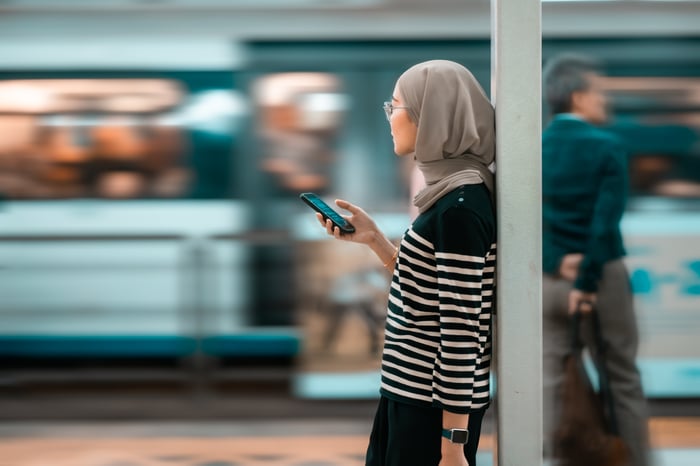 Broadcom's business-to-business focus makes it one of the less-known 5G stocks among consumers. However, its broadband access solutions touch billions of users who have never interacted with the company directly.

Broadcom spends $5 billion annually on research and employs engineers near its largest customers. This has helped the tech giant develop technologies such as Wi-Fi 6, which has increased Wi-Fi speeds while reducing latency. It also bolsters an infrastructure software business that helps clients increase efficiency and improve network security.

Also, for Q4, it projected revenue of $7.35 billion. If that figure holds, it will mean a 14% increase compared with the fourth quarter of 2020. Additionally, Broadcom's annual dividend of $14.40 yields 2.6% and has built a 10-year history of double-digit annual hikes, an attribute that should attract some income investors.

Such growth continues to send the stock higher. The increase of over 45% during the last 12 months has taken the stock to all-time highs. Furthermore, its P/E ratio of just over 40 has not only fallen over the previous year but offers new investors a reasonable valuation relative to growth. Such attributes should make Broadcom an attractive investment for the foreseeable future.

Although the company develops IoT and automotive solutions, Qualcomm derives most of its revenue from the handset business. Due to its portfolio of wireless patents, no company can build a 5G phone without a Qualcomm chipset. Moreover, thanks to the need to upgrade, Grand View Research forecasts a compound annual growth rate of 69% for this industry through 2028.

Admittedly, companies such as Apple are trying to catch up technologically. Nvidia has also attempted to acquire Arm Holdings, a supplier Qualcomm depends on for its chipsets. However, the UK government has signaled that it may block that merger, a development that would strengthen Qualcomm's 5G dominance.

That likely explains Qualcomm's improving financials. For fiscal 2021, Qualcomm reported revenue under generally accepted accounting principles (GAAP) of just under $34 billion. This came in 46% higher than in 2020. Over the same period, GAAP net income surged 74% to $9 billion as the company limited the increase in expenses to 37%. It also earned an additional $1 billion in income from non-core sources, more than compensating for an additional $700 million in income tax expenses.

For Q1 2022, the company forecasts revenue of $10.0 billion to $10.8 billion, a 26% increase year over year at the midpoint. With non-GAAP income of $3 per share forecasted for that quarter at the midpoint, it would result in a 38% net income boost over the same period.

Interestingly, that rate of increase would signify slowing growth, but it still means significant growth for a stock trading at 21 times earnings. Also, while the stock has only risen by about 8% this year, the fact that Qualcomm stock was up nearly 23% in the first week of November could point to further moves higher.

T-Mobile has steadily logged gains over the years as lower pricing and key acquisitions, such as the purchase of Sprint, have helped the company steadily gain market share. According to the company, T-Mobile has a market share of approximately 30% and holds the lead in postpaid net additions.

Now, T-Mobile has won a No. 1 ranking from umlaut on 5G coverage, reliability, and speed for a second consecutive year. This is likely driven by its investments in Extended Range 5G, which covers 305 million Americans, and Ultra Capacity 5G, which reaches 165 million people. This could also help it compete with Verizon, which has long won awards from JD Power on network quality.

For the first nine months of 2021, revenue of $59 billion surged 24% compared with the same period in 2020. Over that time, net income of $2.6 billion grew 12%. A 39% increase in interest costs placed some pressure on profitability.

Also, while T-Mobile stock has fallen by about 10% this year, the 130% increase over the last five years far surpasses the growth of both AT&T and Verizon. This should compensate for T-Mobile's higher 45 P/E ratio and the fact that T-Mobile is the only one of the three not to pay a dividend. As more customers switch to 5G, its lead in net additions and quality improvements could boost T-Mobile's growth over time. 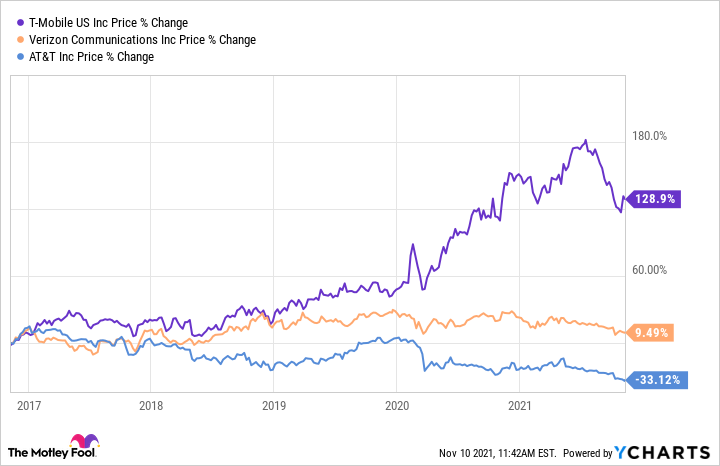