The market leader in meat alternatives may be a victim of its own success.

Seemingly repeating the pattern of "winning the lockdowns, losing the reopening" seen in other stocks that soared during the initial stages of the COVID-19 outbreak, plant-based meat company Beyond Meat (BYND 0.37%) took a beating on the market after reporting its fiscal 2021 third-quarter results on Nov. 10. Revenue increased, but the company generated another net loss -- a much steeper loss, in fact, than Wall Street expected.

Add in the company's muted guidance, and the elements leading to a 15% plunge last week are easy to see. These developments set up a fairly bearish short-term outlook, and they raise red flags for the plant-based meat market overall.

The faux meat producer's most obvious miss was its profitability. The third-quarter net loss amounted to $54.8 million, nearly tripling the $19.3 million loss reported last year. For the first nine months of 2021, that figure has similarly worsened from $27.6 million to $101.7 million year over year.

While its net loss margin rose above 50% of revenue last quarter, adjusted losses per share of $0.87 also fell far short of the analyst consensus, which called for a loss of $0.39. This bottom-line miss likely accounted for much of the market's negative reaction -- but not all of it. 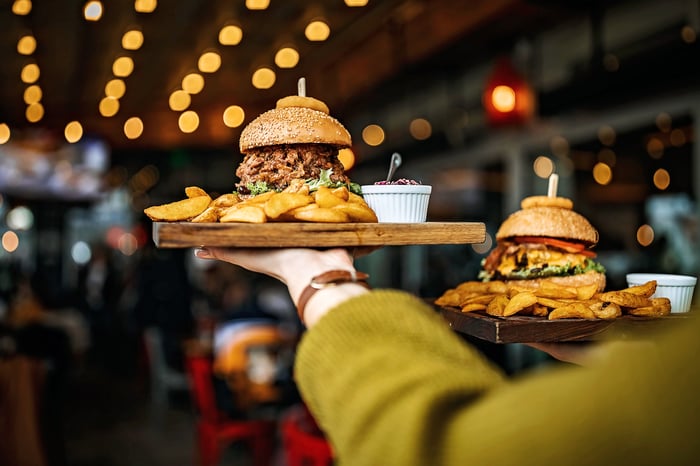 Turning to Beyond Meat's 12.7% year-over-year revenue growth, this looks like a win at first glance. However, digging deeper, investors can consider this result bad news, too. Management had to revise its third-quarter revenue outlook downward in late October as it realized results would come in way below the previous guidance it provided for $120 million to $140 million. And this latest result marked a significant deceleration from the 31.8% growth reported in the fiscal second quarter.

Furthermore, Beyond Meat is losing its momentum much faster than analysts previously expected. In Sept. 2020, a Forbes article cited consensus growth estimates for the company. After revenue surged 239% in 2019, analysts expected growth to slow to 61% in 2020 (Beyond Meat actually reported just 36.6% growth) and 17% by 2025.

The company is already reporting numbers well below that 2025 threshold, suggesting Beyond Meat's success is ebbing much faster than analysts expected.

Restaurants, competition, and Beyond Meat's future

Management's guidance calls for fiscal fourth-quarter revenue to decline quarter over quarter to $85 million to $110 million. At the midpoint of that range, revenue will be down 4.3% year over year.

Interestingly, Beyond Meat seems eager to blame COVID-19 uncertainty for its latest performance. But recall the company initially enjoyed a sales boost from the pandemic. In fact, sales of plant-based meats overall were up 264% in just the first two months of 2020's stringent pandemic lockdowns. Now, management is warning investors its "operating environment continues to be affected by near-term uncertainty related to COVID-19."

During the earnings call, CEO Ethan Brown cited a list of both major and small restaurant chains currently featuring limited releases of Beyond Meat products in their menu selections. This includes the rollout of the McPlant burger at McDonald's, first tested in Europe and now available at some U.S. locations. While getting its plant-based meat into the planet's biggest fast food chain could be a "game-changer," real meat has been outperforming plant-based meat as restaurants reopen.

Planned cost-cutting measures are another possible source of good news, but the path Beyond Meat has blazed for meat alternatives has resulted in numerous faux meat competitors springing up, many of them owned or backed by well-established food companies with deep pockets and far-flung distribution networks.

While it might be possible to argue the stock's 32% decline year to date is a buying opportunity, that opportunity comes with high risk. For those still intrigued by the potential in plant-based meat, it's best to wait on the sidelines and track Beyond Meat's fight to become a sustainable growth story among food stocks.