The artificial-intelligence lending platform Upstart (UPST -0.43%) disappointed investors with third-quarter results of $0.30 in diluted earnings per share (EPS) on total revenue of $228 million from more than $3.1 billion in loan originations.

The results weren't exactly bad, as both EPS and revenue beat analyst estimates. However, management's guidance implied that profits would slow in the fourth quarter, and with Upstart trading at nearly 450 times earnings prior to the third-quarter report, there wasn't a lot of room for missteps.

The disappointing quarter, however, should be very beneficial for one of Upstart's competitors, LendingClub (LC 2.32%), a digital marketplace bank also providing installment loans. Here's why. 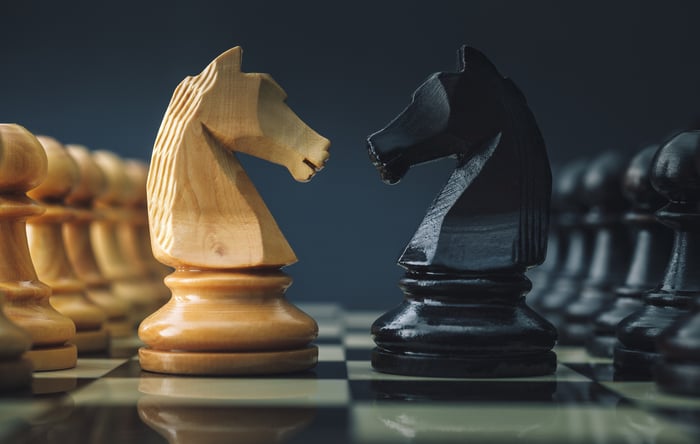 Similar results with a lower valuation

LendingClub and Upstart have different business models. Upstart is seeking to replace Fair Isaac's FICO credit scoring and sell its loan underwriting technology for banks to white label, although currently many of its loans are still originated on the Upstart platform. LendingClub originates loans for its bank partners and asset managers and then retains 15% to 25% of loan originations on its own balance sheet and collects recurring interest income on those loans.

But both companies are still competing over unsecured personal loans for the most part and using technology, data, and machine learning to more efficiently underwrite those loans and better assess the creditworthiness of a borrower. So they are competitors in a lot of ways.

This has been a phenomenal turnaround year for LendingClub. In March, management guided for full-year revenue of nearly $487 million on total originations of nearly $6.3 billion. The company expected a full-year loss between $175 million and $200 million. But after completing its acquisition of the branchless Radius Bank and the bank charter that came with it, LendingClub has been able to ramp up its new business model faster than anyone ever expected. The company has now turned in two consecutive stellar quarters, reaching profitability well before it was expected to and closing the gap in terms of quarterly earnings results with Upstart. Here's a look at third-quarter results for both companies.

LendingClub has now significantly raised its guidance, and projected results for the fourth quarter and the full year have quickly narrowed between the two companies (I used the high end of management's estimates for both).

Estimates for fourth-quarter performance and full-year revenue are very similar for both companies. Keep in mind that LendingClub reported a roughly $47 million loss in the first quarter of the year as it dealt with some nonrecurring expenses related to the Radius acquisition, while it was still ramping up its new model.

While both companies are putting up similar results (and as LendingClub narrows the gap on revenue and profitability), Upstart has a market cap of roughly $20 billion even after a big sell-off following its third-quarter earnings results. LendingClub's market cap is roughly $4.2 billion.

Other things that were seen this quarter: Both companies originated roughly $3.1 billion of loan volume (a major driver of revenue for both companies), and LendingClub only had about $51 million in marketing expenses while Upstart spent more than $93 million. Also, LendingClub CEO Scott Sanborn noted on the company's third-quarter earnings call that more than 80% of loans issued by the company are automated. The automated loan percentage at Upstart fell to 67% in the third quarter and has never exceeded 71% in past quarters.

What I see here is two fintech companies generating similar revenue and profitability, but LendingClub is doing it more efficiently and has ramped up faster in recent quarters. Yes, LendingClub and Upstart have different models, and clearly, the market right now has much higher expectations for Upstart than LendingClub.

But I also think the market has gotten way ahead of itself and that the gap between LendingClub and Upstart is not justified. I think third-quarter results and updated guidance for both companies further justify this thesis, and they bode well for LendingClub.