Taylor Carmichael and Anders Bylund
(TMFSaintCroix)
Author Bio
Taylor Carmichael is a former attorney and filmmaker. He's the author of a line of murder mysteries, including Whodidit in the Supreme Court? and Whodidit With a Senator? The majority of what he knows about stocks he learned right here at the Motley Fool.

Square (NYSE:SQ), the company that brought Bitcoin to the masses and is revolutionizing the whole banking sector, surprised a lot of Fools when it made a deal to buy Afterpay (OTC:AFTP.F), the Australian creator of the "buy now, pay later" (BNPL) space that has taken the world by storm. Afterpay has upended the whole notion of credit by making it free (if you pay on time).

Some Fools were unhappy that Square bought the unprofitable-but-fast-growing Australian superstar, arguing that CEO Jack Dorsey paid too much. Nonetheless, Dorsey has been right over and over again in the fintech space, so the criticisms of this merger weren't too loud. Still, some people might wish the union would fall apart. If it did, which company would you rather own?

Fool contributor Anders Bylund says Square would be his choice, while Fool writer Taylor Carmichael opts for Afterpay. And here's why we think this way. 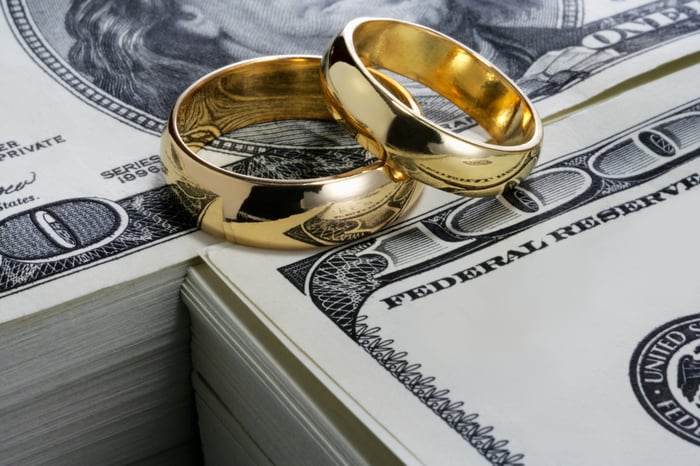 Square is obviously the safer way into this future merger

Anders Bylund (Square shares, please): I'll concede that the Afterpay merger looks extremely likely to succeed. Every merger faces some challenges, but the arguments against this transaction have been muttered, not shouted. The regulatory approvals are continuing apace, and Square's shareholders approved the buyout with an overwhelming 99.8% of shareholder votes being cast in favor of the deal. The hurdles in front of the final approval are falling one by one, and the last John Hancock should be in place early next year.

And there isn't much room for arbitrage here, either. Afterpay shares currently trade at 36.9% of Square's stock price, which is just a hair below the proposed stock-swap offer of 0.375 Square stubs for each Afterpay share. This ratio has been stable since Day One: 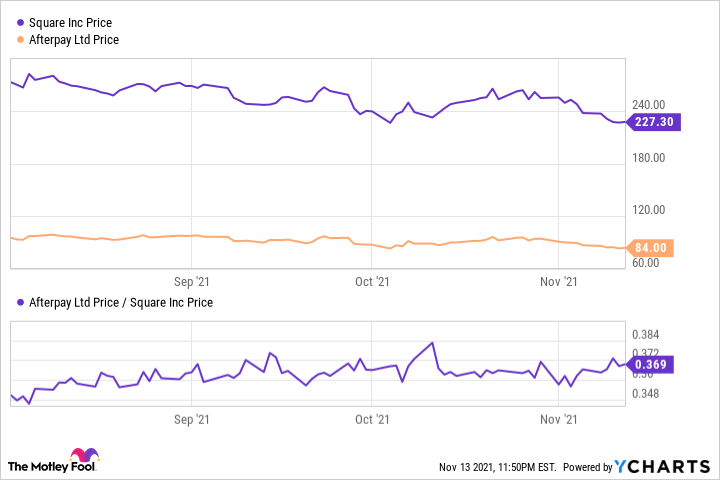 Still, nothing is absolutely guaranteed until the ink is dry on the final paperwork. This is especially true for mergers going across national borders. For example, American semiconductor giant Qualcomm (NASDAQ:QCOM) was just one step or two away from completing its proposed $44 billion buyout of NXP Semiconductors (NASDAQ:NXPI) in 2018, until geopolitical concerns stopped that deal in its tracks. If this could happen to Qualcomm and NXP, it could happen to Square and Afterpay as well.

On that note, there's a small chance that it actually matters whether you're buying Afterpay or Square shares today. If the deal falls apart for some reason, the American financial technology company looks like the safer stock to hold for the long haul. Both companies are growing their revenues at similar speeds, but Square is also an effective cash machine while Afterpay consistently reports negative earnings before interest, taxes, depreciation, and amortization (EBITDA) -- and the cash is only burning faster over time: 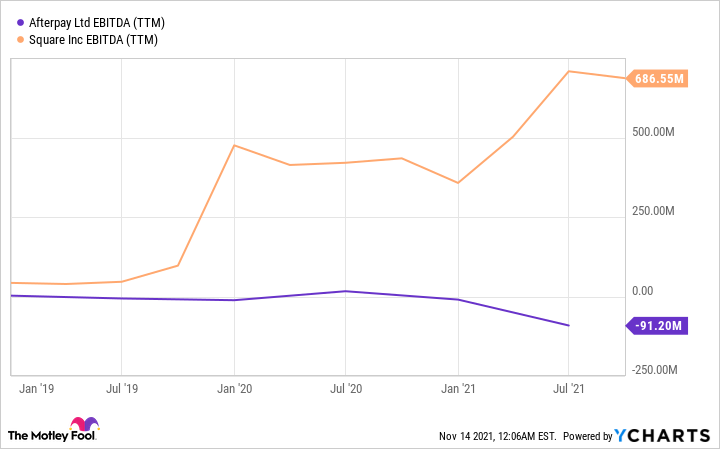 So this discussion is largely academic, but Square offers the better entry into the proposed merger just in case something goes wrong at the last minute.

Square is marrying up

Taylor Carmichael (Afterpay): I'm extremely bullish on Square, and I think Jack Dorsey is a genius. So it's pretty much impossible for me to be negative on Square. On the other hand, I'm probably the biggest fan of Afterpay at the Motley Fool. So let me speak on why Square was so willing to pay up for Afterpay, and why you want to own that Australian powerhouse if these two companies end up in divorce court (heaven forbid!)

Afterpay is top dog and first mover in the BNPL space. If you don't know what that is, it's interest-free credit. Retailers happily pay for Afterpay's service, because it makes their revenues spike way higher. Affirm (NASDAQ:AFRM) and PayPal (NASDAQ:PYPL) are both copycats in this space. And Afterpay is still way ahead. For instance, on PayPal's recent earnings report, the company reported that it had processed $5.4 billion in total product volume (TPV) since the launch of the service a year ago. Afterpay dwarfs that number, reporting $22.4 billion in underlying sales.

One of the ways Afterpay is winning is by providing its service in brick-and-mortar retailers. Indeed, that's why the Australian company is such a good match for Square, since both companies are going after real-world market opportunities, not just internet commerce. So while PayPal and Affirm are seeing some internet tailwinds because of the lockdown, Afterpay absolutely crushed expectations in spite of the lockdown.

The other thing that's amazing about Afterpay is that it sees itself as a consumer brand first and foremost. So, for instance, Sept. 9-12 is designated "Afterpay Day," when the company offers killer deals to all its subscribers across its whole universe of retailers.

All this success makes Afterpay a stronger stock. Don't believe me? Check out the stock charts. Let's compare Afterpay stock with the two titans of fintech, PayPal and Square. 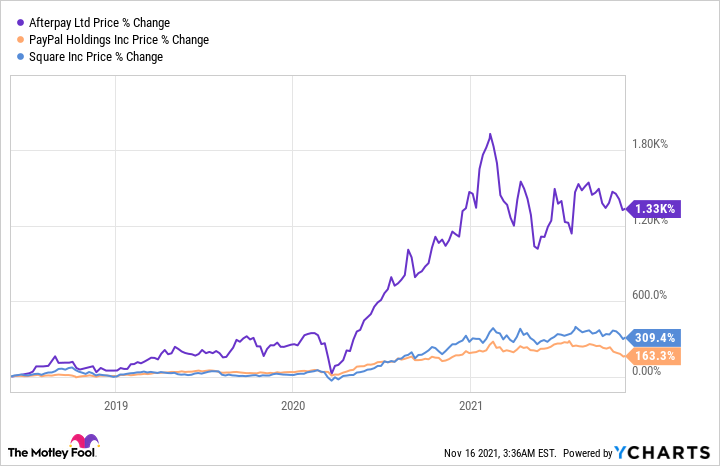 It's not even close. And mind you, we're looking at the American Depository Receipts (ADR), trading here since 2018. Afterpay was an insane stock in the Australian markets for a full year before its ADR showed up.

If you have two amazing companies that are taking over the world, as an investor you usually want to be in the smaller one. As dynamic and wonderful as Square has been, Afterpay has been a significantly stronger stock for shareholders over the last several years.

It's a happy union for sure. Nonetheless, if you dig into the numbers, you can see why Square paid so much for Afterpay.