Desktop Metal (DM 4.52%) reported third-quarter 2021 results after the market close on Monday that disappointed market participants in the day's after-hours trading session. They drove shares down 5.7% after hours, which followed the stock's 6.9% decline in Monday's regular trading session.

In 2021, shares of Desktop Metal (which went public in December 2020 via a special purpose acquisition company, or SPAC) are down 53.4% through Monday's regular trading session. By comparison, the S&P 500 index has returned 26.2%, and shares of 3D printing companies 3D Systems and Stratasys are up 149% and 59.7%, respectively, over this period. 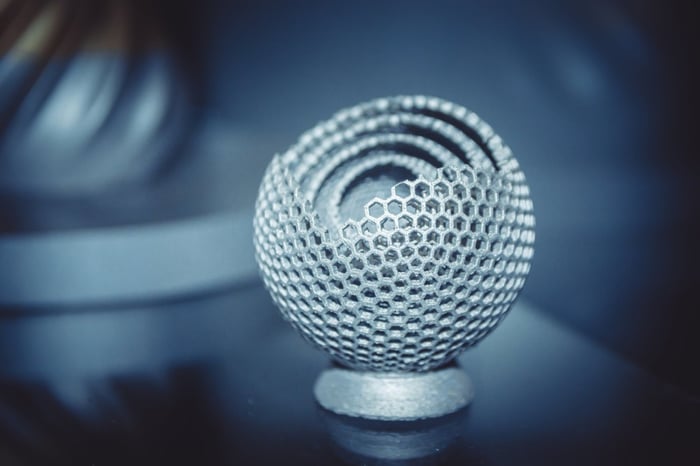 Revenue was up 34% from the second quarter of 2021. The company attributed the growth to strength in its core metals business and contributions from recent acquisitions. On the earnings call, management said revenue came in lower than it had anticipated because of supply chain issues, particularly involving its EnvisionTec polymer business. (EnvisionTec is a Germany-based company that Desktop acquired in February.)

As with the first and second quarters, management didn't disclose organic revenue growth, which is growth excluding acquisitions made in the last year. So, investors can't know how well its core metal 3D printing business is performing.

Wall Street was looking for a loss of $0.09 per share on revenue of $27.1 million, so Desktop missed both expectations.

In Q3, the company used $38 million in cash running its operations, compared to using $18.6 million in the year-ago period and using $33 million last quarter. It ended the period with $423.9 million in cash, cash equivalents, and short-term investments.

Acquisitions made in the third quarter

In September, Desktop bought Aidro, an Italian company described in the press release as a "pioneer in the volume production of next-generation hydraulic and fluid power systems through metal additive manufacturing [or 3D printing]."

On Friday (so, the fourth quarter), Desktop Metal closed on its acquisition of The ExOne Company, which it announced when it released its second-quarter results. ExOne is a metal-focused 3D printing company and, like Desktop, uses a binder-jetting technology.

The $561 million deal is the company's biggest to date. It financed about 66% of the acquisition price through the issuance of new shares and 34% through cash.

During the third quarter, we delivered solid financial performance underscored by sequential top-line growth of 34% and more than a 180 basis point sequential increase in our gross margins as we continue to gain scale. Our core metals business was a key driver of this success, which demonstrates the market enthusiasm for our AM 2.0 technology. [AM stands for additive manufacturing, the technical name for 3D printing, though the two aren't exactly synonymous.]

With the addition of ExOne, and the Production System P-50 progressing toward initial shipments, we are extremely well-positioned as we head into our second year as a public company to deliver on our long-term commitments to shareholders.

The Production System P-50 is the company's flagship metal 3D printing system for higher-volume manufacturing applications. On the earnings call, Fulop reiterated what management has been saying since the company went public: That this product will begin shipping before the end of the year. With about six weeks left in 2021, we'll soon know whether the product launch date is pushed back.

Management lowered its full-year outlook for revenue and a key profitability metric as follows. (All guidance metrics exclude the impact of the ExOne acquisition.)

Investors considering buying Desktop Metal stock should proceed with caution. The reasons for caution include the lack of transparency about organic revenue growth, the scaling back of full-year guidance, and the type of strategy the company's pursuing. Reiterating what I wrote last quarter:

Management is using a largely growth-by-acquisition strategy. These strategies can be very successful if done right -- and I particularly like a couple of the company's acquisitions. That said, these strategies present additional challenges, as well as concerns for shareholders. One main business challenge is integrating all the acquisitions, and a concern for shareholders relates to the financing of the acquisitions. If financing is done by issuing stock -- as [was] the case with the bulk of the ExOne acquisition -- current shareholders have their ownership percentages diluted. Alternatively, a company can borrow money, but that adds to its debt load.