The market did not like what it saw from Disney's streaming segment.

The Walt Disney Company (DIS 0.22%) reported fourth-quarter earnings on Nov. 10 that disappointed investors. The market was hoping for Disney to report better results for its streaming segment. The silver lining for Disney since the pandemic onset has been the rapid growth of its streaming services.

However, as economies are reopening, the growth of those services is slowing down. Still, other parts of Disney's business are recovering and are poised to start bringing in billions in profits. Let's look closer at Disney's fourth-quarter results and determine if the sell-off is a buying opportunity for long-term investors. 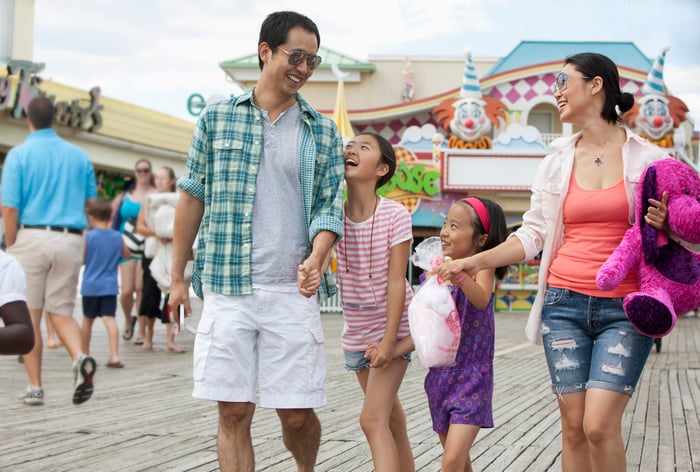 Despite disappointing investors, Disney did add 5 million streaming subscribers in Q4 from the previous quarter. It now boasts a total of 179 million paying members across its three services (Disney+, Hulu, ESPN+). Note, Disney did not enter the streaming business significantly until the launch of Disney+ in November 2019. Meanwhile, the streaming pioneer and market leader, Netflix, has been at this for over a decade and has amassed 214 million streaming subs.

Disney's management has projected it will have over 300 million subs by fiscal 2024, at which point its streaming segment will also be profitable. The shift to focusing on streaming for Disney comes after consumers have clearly shown their preference for that form of viewing.

Disney's theme parks have a long way to go

Disney's fourth quarter was the first since the pandemic onset where all its theme parks were open the entire quarter. Disney had to close its theme parks to help slow the spread of COVID-19 and only slowly began reopening them, albeit at limited capacity. The parks are a lucrative source of profits and cash flow for Disney. In 2019, before the outbreak, the segment that includes Disney's theme parks brought in $6.8 billion in operating income, good for 45% of its overall operating income.

The parks are nowhere near full strength and only generated $22 million in operating income in the fourth quarter, but the fact they are all open again is a step in the right direction. When the parks were closed, management made several changes to operations, such as raising prices on tickets, parking, and other experiences. The changes were not limited to revenue-increasing items and included efficiency enhancements like instituting mobile ordering options for restaurants and concessions inside the parks. Overall, management is confident that the changes will lead to a segment that will generate higher profits than before the outbreak.

Disney's fourth quarter showed a company on the path to recovery from devastations caused by the pandemic. There is plenty of work left to be done and lots of progress that needs to be made. The road to full recovery is not likely to be without challenges and difficulty along the way. That could be another reason why Disney's stock fell nearly 10% in the days following its earnings announcement.

That might be a buying opportunity for long-term investors willing to wait for the company to regain its form. Disney's stock is now trading at a forward price to earnings ratio of 38, near the lowest of the last two years. The figure may be a little deceptive because Disney's earnings have been dramatically altered during the pandemic. Still, it does highlight an opportunity to buy the stock at a lower price.