The company said reservations for its luxury electric sedans grew 30% in just the past six weeks.

Lucid Group (LCID -8.70%) just announced its third-quarter financial update, but all the market is paying attention to is what has happened since the end of the quarter. And there is good reason for that.

Lucid has been touting its technology advantages with its luxury electric Air sedans. It received some vindication for that when the U.S. Environmental Protection Agency (EPA) gave its long range models a record rating of 520 miles on a single charge. And now the Lucid Air has won the prestigious 2022 MotorTrend Car of the Year designation. 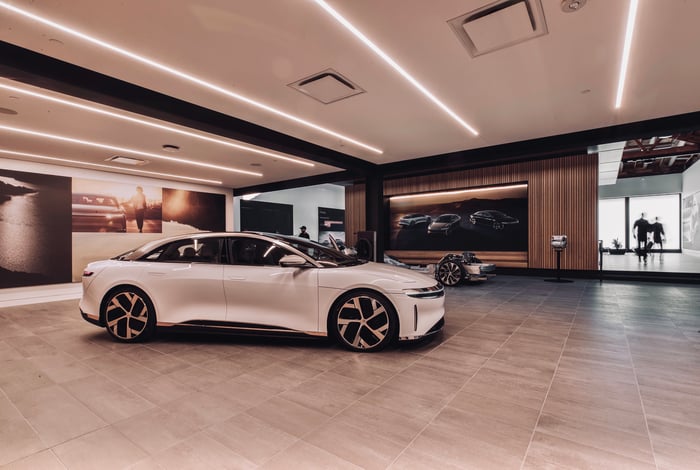 Subsequent to the end of the quarter, Lucid hosted a rally with the first deliveries of its $169,000 Air Dream Edition to customers. The company sold out the 520 reservations of that model -- a number set to highlight the leading battery range rating. Just two weeks later, the company announced the MotorTrend award.

In a statement acknowledging the achievement with the company's first car, Lucid CEO and chief technology officer (CTO) Peter Rawlinson said, "Our objective of achieving range through efficiency and technical innovation is crystallized in Lucid Air, and we're elated that this effort has been recognized by MotorTrend against such formidable competition from well-established automakers."

At the same time, Lucid provided investors with its third-quarter update, and said that overall reservations for its Air models have jumped to more than 17,000, an increase of 30% from the level at the end of September. All that news got investors interested, and the stock price has been on a tear since.

Plans for more to come

Lucid will begin shipping its other models early next year, which include the $77,400 base model Air Pure and two other models with price tags up to $139,000. While it clearly intends to take on the Tesla Model S, which CEO Rawlinson helped develop in his time working at Tesla, Lucid also has future plans to diversify its product offerings.

The company plans to produce 20,000 vehicles next year, and says it will introduce the Gravity, its first SUV, in 2023. It also said in a July 2021 presentation that it will follow up with additional new models beginning in 2025. Lucid has guided investors to expect more than $2 billion in revenue next year, climbing to almost $10 billion in 2024 from these growth plans.

Those projections are likely what is helping to drive the current surge in the stock price. Investors want to get in on "the next Tesla" stock. But the market is full of electric vehicle stocks that investors hope will soar. And the market is also full of start-up companies that are having a hard time living up to prior projections.

Lucid reported a net loss of more than $500 million in the third quarter. But it did end the period with a cash balance of $4.8 billion, meaning it has plenty of capital to fund growth in the near future. The company is off to a good start with what appears to be a well-received initial product. Getting into the stock now for a long-term investment makes sense as a speculative investment. But investors should keep expectations tempered, and realize there is still a long road ahead.