Upstart has a strong business, but the market has clearly set huge expectations for it.

Expectations are through the roof for the artificial intelligence lending platform Upstart Holdings (UPST 10.44%), which trades at roughly 295 times earnings after the stock dove roughly 24% since the company reported third-quarter earnings. Upstart, with its machine learning and 28 billion cells of training data, is seeking to replace traditional credit underwriting such as Fair, Isaac's FICO credit scoring that the company believes is out of date. The company claims to be able to improve loan default rates at banks by 75%. Investors believe the company is onto something big, but I still have questions about whether this business model can live up to the sky-high expectations set by the market.

Can Upstart's model live up to expectations?

Upstart is a financial technology company in the business of originating personal loans, but has begun to get into the world of auto lending and also wants to apply its technology to small-dollar loans and then mortgages. Upstart helps customers get loans in two main ways: It does the marketing on its own to find customers and then pass them off to banks and credit unions, or banks can essentially embed Upstart's technology within their websites and branding. Most of the loans are currently referred from Upstart, although the company expects direct branding originations to grow and eventually constitute a larger portion of originations and revenue.

Ideally, Upstart is positioning itself as a software-as-a-service (SaaS) company, where it provides the technology to lots of banks and credit unions that bring in the customers and fund the loans with deposits. Upstart collects a fee for every loan originated through its platform. This is more ideal for them because then Upstart doesn't have to go acquire the customers themselves, which requires lots of spending on marketing and sales. But my big question is whether this strategy of partnering with banks and credit unions will be as successful as the market thinks. 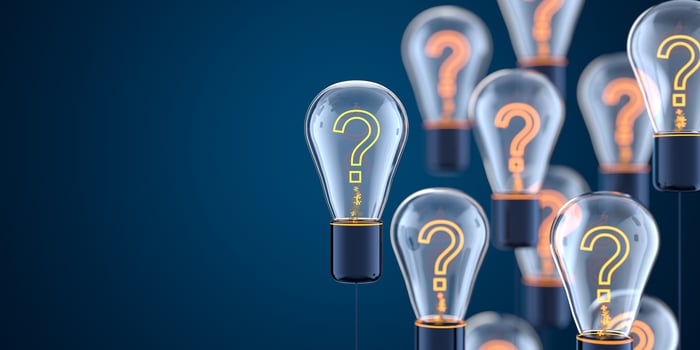 For this to work, Upstart will want most of its bank and credit union partners to eventually integrate its technology, stop using traditional credit underwriting that focuses on metrics like FICO, and penetrate their existing customer bases while opening their credit boxes and criteria to people they may not have historically served. But many of Upstart's partners so far are small community banks and credit unions. These kinds of institutions aren't typically known for making lots of installment loans because these smaller loans can be expensive to originate and have higher default rates.

Upstart eases these pain points by providing the technology that can more efficiently originate loans with lower default rates. However, small banks and credit unions still aren't particularly good at attracting new customers. The digital landscape has gotten very competitive. A survey from Experian toward the end of 2019 showed that fintech companies were originating nearly half of all personal loans, and plenty of fintech competitors have emerged since then.

The other thing to consider is that small banks and credit unions are typically very conservative. While four of Upstart's partners have stopped using FICO, it's not a guarantee that all Upstart partners will follow suit because they can use Upstart's technology and set their own credit parameters. Small banks and credit unions may also not be so likely to do these installment loans when interest rates rise, which typically leads to more bad debt, and when the financial system is not so flush with deposits -- right now, almost all financial institutions have more deposits than they know what to do with.

It is also not clear to me yet that Upstart will bring in all of these new borrowers that the banking system has historically ignored. Upstart's CFO Sanjay Datta on the company's Q3 earnings call said that over the past year, loan application volume has tripled as the company has had more capacity to serve borrowers across all parts of the "credit spectrum," yet Upstart's conversion rate in Q3 declined. "Borrower segments that are relatively newer to our models will initially tend to convert at a lower rate than those segments for which we have longer history," Datta said. "Newer borrower profiles will tend to have more conservative rates of instantaneous approval until we develop a longer history and greater loan volume for our models to train on."

Achieving growth is not a guarantee

Jefferies analyst John Hecht said he thinks Upstart can achieve a 40% market share in the personal loan space by 2025. If you annualized Upstart's $3.1 billion of loan originations in Q3, that assumes annual originations of $12.4 billion. According to TransUnion data, there were $81 billion of personal loan originations between the second quarter of 2020 and the first quarter of 2021. That assumes a current market share of about 15%. Now, I assume Upstart can continue to grow originations from here, and the personal loan market will likely get bigger, but that still means a lot has to go right over the next few years and Upstart will have to overcome challenges explained above, as well as continue to ward off fintech competitors.

Also, Upstart is planning to apply its technology to other larger lending markets including auto lending, small-dollar loans, and the mortgage markets, all of which impose their own unique challenges. CEO Dave Girouard said the interest from its bank and credit union partners for a small-dollar loan product -- loans for as little as a few hundred dollars paid back over a few months -- is "off the charts." Girouard also said the company is designing a small-dollar loan product with an interest rate of under 36%, which would be extremely impressive because these loans can have interest rates over 600%. The reason for these high rates is because small-dollar loans can cost a similar amount for banks to originate as bigger loans, but obviously with smaller volumes and higher default rates.

Upstart is also interested in auto lending, which provides a $672 billion annual market opportunity, and the mortgage market, which presents an annual market opportunity of $4.5 trillion. But these lending categories can be competitive and also do not typically come with the same high interest rates as installment loans, so I'm not sure that banking partners will want to pay the same fees to Upstart forever because they eat more noticeably into the margin and profitability of each loan.

Many mortgages also come with very strict credit requirements if the originator is intending to sell them to the government-sponsored entities, so that leaves less wiggle room for Upstart's technology. There is still plenty of opportunities outside the qualified mortgage segment. But to reiterate my last point, mortgage interest rates can yield some of the lowest margins in the business, especially in a low-rate environment, which is why the banking system does far fewer mortgages now than it did a decade ago, so adding another fee to the process may not be ideal.

A good company with a high valuation

What Upstart has done thus far is no doubt impressive and I do think the company is certainly onto something. But the valuation and stock price have run up so quickly, I feel like the market has already assumed a lot will happen that isn't a guarantee yet. Upstart still has a lot of work to do, including getting more of its banking partners to drop FICO, showing that they can effectively convert originations without FICO, and penetrating new lending segments that are very competitive. I think investors need to be asking whether Upstart's business model can meet the lofty expectations set by the market.

Why Upstart Was Falling Hard Today
401%