The home improvement retailer has benefited as more consumers spruce up their residences.

Lowe's (LOW 3.75%) reported third-quarter earnings before the market opened on Wednesday, and the results affirm that the home improvement retailer is maintaining the sales momentum it's been seeing all year as consumers continue to take on more projects.

Earnings results since the pandemic's onset have pointed to the idea that the home has become essential to people. Even though economies are reopening, many people have chosen to exercise at home, work from home, and entertain themselves at home.

That change in consumer behavior continues to benefit this home improvement retailing giant. 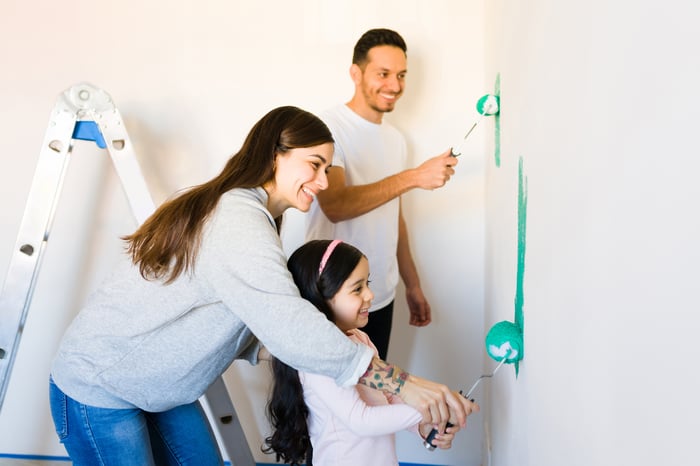 Sales are accelerating at Lowe's

Sales grew by 2.7% to $22.9 billion in Lowe's fiscal third quarter, ending Oct. 29. The growth rate may look pedestrian, but it is impressive considering it is building on a third quarter in 2020 that saw sales surge 28.3% year over year.

Comparable-store sales (or comps), which are sales for stores open for at least 12 months (and thus exclude the impact of new store openings and closings), accelerated throughout the quarter. Comps declined by 0.5% in August from last year, increased by 0.7% in September, and surged by 7.2% year over year in October.

CEO Marvin Ellison discussed the boost in the third-quarter conference call following the earnings announcement: "After Labor Day, we saw an increase in DIY [do-it-yourself] demand on the weekends as travel activity slowed down and children returned to school. As a result, consumers were once again spending more time on projects in their homes."

It seems like folks were eager to get out of the home in the warmer summer months when the kids were home from school. Now that the kiddos are back in the classroom and it's getting colder, people are planning to spend more time at home. That bodes well for Lowe's, and it could lead to continued sales momentum heading into the fourth quarter.

That could be one reason management raised the estimate for overall revenue in 2021. The previous estimate was $92 billion, but after seeing positive trends in the third quarter, management upgraded the guidance to $95 billion. And because it expects those sales to come with higher profits, it also raised the target for 2021 operating profit margin to 12.4% from 12.2%.

Lowe's stock was relatively flat for the day that it announced earnings. But the shares got a nice bump the day before when rival Home Depot reported excellent results. Over Nov. 16 and 17, Lowe's stock price was up 4.6%. The market liked what it saw from the home improvement retailer.

The stock is now up about 53% on the year. The company increased sales by 24% in its fiscal year 2020, almost four times its compound annual growth rate over the last decade. Investors were concerned that Lowe's might give up some of those 2020 increases in 2021 as economies reopened and folks ventured out of their homes more often. So far, that is not playing out, and investors are responding to the good news.