With an infrastructure bill now signed into law and a huge package addressing social spending and climate change passed by the House today, now might be a good time to look at real estate investment trusts (REITs) that could benefit from more government money going into the economy. 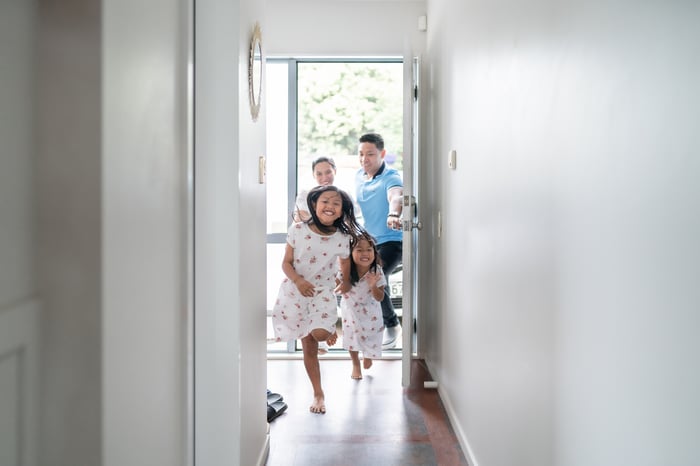 Zillow (NASDAQ:ZG)(NASDAQ:Z) recently surprised investors by announcing that it plans to exit the iBuying business entirely, despite having promoted it as the biggest future growth driver of the company. In this Fool Live clip, Fool.com contributors Matt Frankel and Tyler Crowe discuss two of the biggest red flags they see with this move.

Matt and Tyler parse out what happened, as the company with perhaps the most residential real estate data of all couldn't do better with its number-crunching, and how rivals Opendoor and Offerpad could do better with this new way of buying.

Shares of mortgage originator UWM Holdings (NYSE:UWMC) had jumped more than 15% as of 2:40 p.m. ET after the company said it had decided not to go through with a planned secondary offering. UWM also said that it would "accelerate" its previously announced share repurchase program.

Motley Fool contributor Bram Berkowitz says it seems a bit wonky to announce a secondary offering and then reverse course two days later. But market conditions have not been easy this week, and at the end of the day the accelerated repurchase plan will make existing shares more valuable, so shareholders are not complaining.

Bezos planning "Space Business Park": Is this the next real estate investing frontier?

Jeff Bezos' Blue Origin has partnered with several aerospace interests to create the first commercial business park in space: Orbital Reef. They plan to have it up and running by the end of the 2020s, just in time to replace the soon-to-be decommissioned International Space Station (ISS).

Motley Fool contributor Kristi Waterworth also notes here that as futuristic and far-fetched as a business park in space may sound, Bezos' team isn't the only one determined to create the world's longest commute. Lockheed Martin (NYSE:LMT) has teamed with other space hopefuls to race Blue Origins to space with its Starlab.

Nations across Europe are ramping up their fight against COVID-19, up to full lockdowns, as the delta variant drives up cases and casualties. Bloomberg points out in a post today that the word "lockdown" doesn't appear at all in Goldman Sachs' (NYSE:GS) and Morgan Stanley's (NYSE:MS) outlooks for Europe now out for 2022, and a survey of fund managers by Bank of America (NYSE:BAC) places the virus fifth on its list of risks to markets.

The holidays and flu season are here, and COVID-19 doesn't appear to be as threatening to many right now as inflation, but real estate investors need to be alert to changes that could send people back home from stores, restaurants, and offices.