Facebook had a problem and decided to throw money at it.

Shares of Meta Platforms (META -4.27%) -- the artist formerly known as Facebook -- had jumped 3% as of 11:05 a.m. ET on Friday after the company announced a new project possibly aimed at stalling the growth of social-media upstart Clubhouse and potentially acquiring some new content for the metaverse.

As TheInformation.com reports, Meta Platforms will pay musicians and other celebrities cash to move to Facebook. 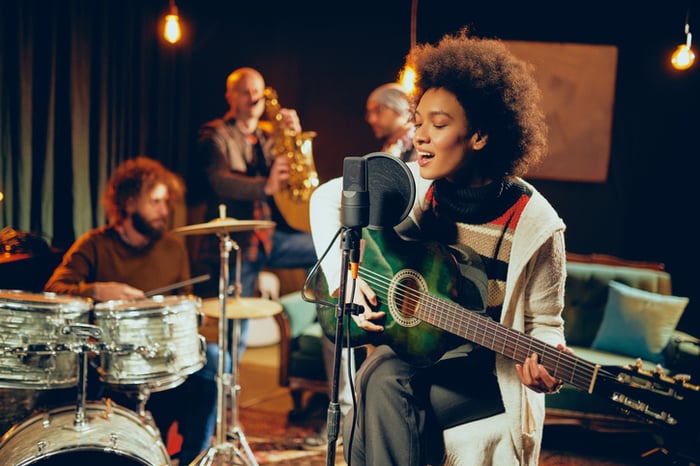 As Clubhouse started gaining popularity earlier this year, Facebook moved quickly to meet the challenge, setting up an audio-only version of its Messenger Rooms videoconferencing platform in April. Several months later, the company now known as Meta Platforms is trying to spur the growth of this new product (dubbed Live Audio Rooms) by offering to pay musicians and other celebrities to host sessions on its audio feature, reports TheInformation.

According to unidentified sources, the news site says, Facebook is offering "hundreds of thousands of dollars over several sessions" to get celebrities to play host to live shows on its platform, which is more money than Clubhouse has reportedly been offering.

As far back as June, it started becoming clear that Clubhouse's growth rate was slowing down. Downloads of the app actually peaked way back in February, and fell off steeply thereafter. It's not immediately clear now, therefore, why Meta Platforms has decided to throw money at a problem that's no longer much of a problem.

Maybe the tech giant just wants to put the final nail in Clubhouse's coffin, by outspending it to attract celebrity talent to its platform. Or maybe Meta thinks Clubhouse had a great idea, but just poor execution, and that Facebook can do the job better and use Live Audio Rooms to keep its growth engine humming.

If it's right about the latter, then Facebook may have stumbled upon a great way to attract customers to try out the new metaverse that it's building as it evolves into Meta Platforms.