The company's financial results are rebounding from their pandemic lows.

Many drugmakers suffered at the height of the pandemic as sales volumes for prescription drugs decreased. Pharma giant Merck (MRK -0.50%) was one of those companies that saw financial results took a hit due to the outbreak. As a result, the company's shares have significantly lagged the market in the past year.

However, a couple of recent developments could help Merck turn things around. With that as a backdrop, let's look at Merck's overall business and decide whether it is worth buying the company's shares today. 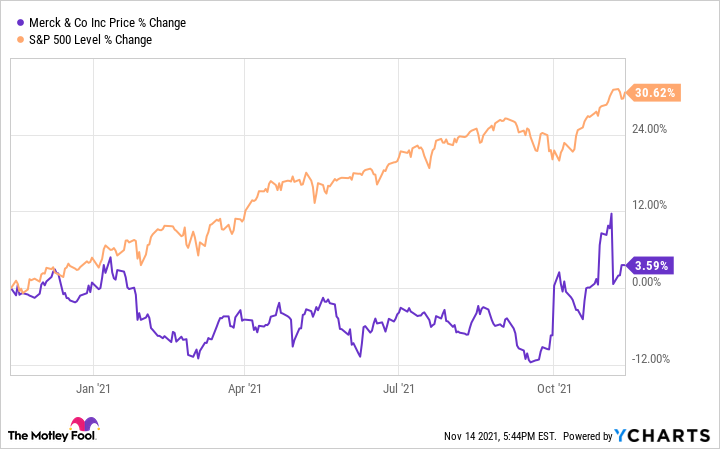 Merck's business has become almost synonymous with its flagship product, Keytruda. This cancer drug is one of the best-selling medicines in the world, and it continues to rack up label expansions. In terms of revenue, Merck is far from having peaked, too: During the third quarter ending Sept. 30, sales of the drug jumped by 22% year over year to $4.5 billion.

Keytruda is still undergoing a raft of clinical trials, and it is expected to become the top-selling drug in the world within the next few years. That's why it will continue to feature squarely in Merck's growth strategy. But the company does have other opportunities. Most notably, Merck's animal health segment is performing well. During the third quarter, sales of the company's animal health business increased by 16% to $1.4 billion. 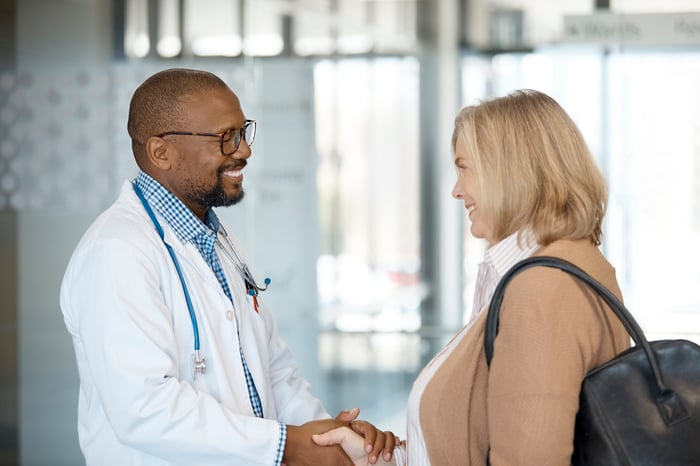 Let's not forget about Merck's human papillomavirus (HPV) vaccines, Gardasil and Gardasil 9, the combined sales of which soared by 68% to $2 billion during the third quarter. The drugmaker's total sales came in at $13.1 billion, 20% higher than the year-ago period. Merck's current lineup of products is robust, and it is about to get even better.

Recent events have made Merck a more attractive investment. First, there is molnupiravir, a coronavirus drug it developed with Ridgeback Biotherapeutics. Merck released positive results from a phase 3 clinical trial for molnupiravir in October. The company reported that the therapy decreased the risk of hospitalization or death by 50% in patients with mild to moderate cases of COVID-19.

None of the patients treated with this medicine died during the study, while eight deaths were recorded in the placebo arm. These results are significant since most leading COVID-19 therapies have severe limitations. Veklury, marketed by Gilead Sciences, is administered by intravenous infusion, while REGEN-COV -- which was developed by Regeneron Pharmaceuticals -- is administered via infusion or subcutaneous injection.

A pill is much easier for patients to take, and that's why molnupiravir could capture a decent share of this market. The medicine was recently approved in the U.K., and Merck is awaiting word from health authorities in the U.S. and the EU. The company also announced agreements to supply several governments (including the U.S.) with millions of courses of molnupiravir pending regulatory approval. This medicine will have a meaningful impact on Merck's top line for much of the rest of the pandemic -- and perhaps beyond if COVID-19 becomes a seasonal illness.

Lastly, Merck plans to acquire all outstanding shares of Acceleron Pharma for $180 per share in cash. The company hopes to close this deal in the fourth quarter -- that is, between Oct. 1 and Dec. 31. Merck has big plans for Acceleron's leading pipeline candidate, sotatercept. According to Merck's CEO, Rob Davis, "Sotatercept has the potential to become foundational as an add-on therapy in the treatment of pulmonary arterial hypertension, where there is a strong need for a new agent that can potentially address the underlying illness and not just the symptoms of this grievous disease."

Investors can expect the deal to strengthen Merck's pipeline, and therefore, its overall business.

Why Merck's stock is a buy

Merck's flagship product, Keytruda, still boasts a long runway for growth, and the company's HPV vaccines are expected to bring in increasingly high sales over the next several years. Then there is the company's animal health business, its promising coronavirus drug molnupiravir, and the pending acquisition of Acceleron Pharma that will add more fuel to its growth engine.

Merck's business looks rock solid, and with a forward price to earnings (P/E) ratio of 14.4 compared to an average forward P/E ratio of 13.9 for the pharma industry, Merck is reasonably valued. That's why despite its poor showing in the past year, I believe that Merck is well-positioned to perform much better in the long run.

Want to Collect a Dividend Every Month Next Year? Buy These 3 High-Yielding Stocks
413%